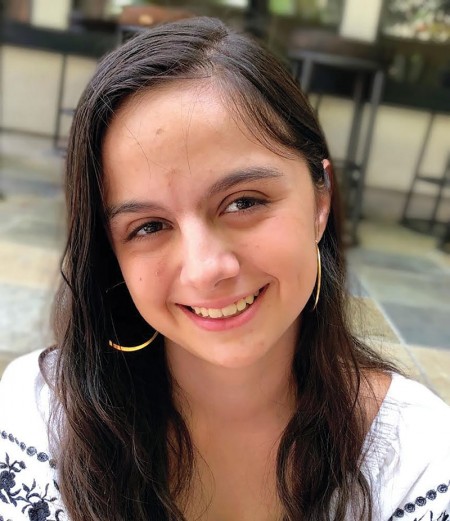 EARTH UPRISING Lucia Urreta, a junior at The Awty International School, was moved by Houston floods and activist Greta Thunberg to take action on climate change.

September 19, 2019, is likely to remain in Bellaire’s collective memory. Imelda flooded the streets, and, at least in my case, kept students locked in school until the evening. Two years earlier, Harvey had struck, causing damage that is still seen today. As I sat in the school cafeteria waiting for the eventual moment when I could leave, I wondered why these so-called 500-year storms were happening in 0.4 percent of the time they were supposed to. Being a “nerd,” I looked through different news articles and science writings to see why these kinds of mega-storms were happening so frequently. The answer: climate change.

Now, this was around the time when activist Greta Thunberg appeared in headlines everywhere with her crossing of the Atlantic. I saw many similarities between her and me although I had barely heard of her before the flood. We were both driven and yearning for change, and her openness of her Asperger’s diagnosis led me to embrace mine.

Empowered, I decided to take action and organize a school strike in front of the Houston City Hall with 30 other high schoolers. That was the catalyst that led me to dedicate my time to advocating for the earth.

This summer, I created the Houston chapter for Earth Uprising, an organization dedicated to educating people on the importance of acting on the climate crisis. It is an endeavor taking both large amounts of patience and time, yet I hope that more people will take on this endeavor for the good of the planet. Even though I have not finished school, I can still create an impact in my community, and this applies to everyone.

It does not matter how old you are. If you have a drive and a passion to create change, then you are definitely capable of doing it. You do not need to be a good public speaker or completely extroverted to be part of a movement; you just need to use your assets. Artists fight with the paintbrush, writers with the pen. Uniformity cannot create change. Only difference can.