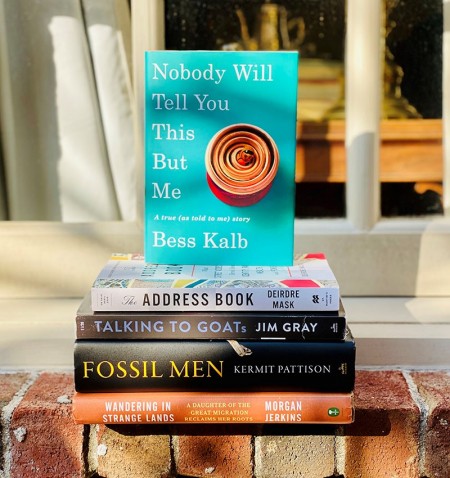 2020 has been quite a year for all of us, and personally, I am ready to put it behind me. A bright spot of this year has been reading more nonfiction books than I normally do. While I found that fiction did not always distract me sufficiently, I was able to focus on nonfiction more easily. So many fabulous nonfiction books were published in 2020, and I had a hard time narrowing down my favorites.

Over the weeks leading up to the end of the year, I am going to be writing about my favorite books in various genres and will finish the year with my top 10 list (which frequently ends up being 11 or 12).

In the nonfiction genre, my favorites include a Sesame Street retrospective, a book about the importance of having an address, a Twitter sensation, the artisan cheese movement in the United States, and much more. Here are the best nonfiction books of 2020 (listed alphabetically):

The Address Book: What Street Addresses Reveal about Identity, Race, Wealth, and Power by Deirdre Mask: When Mask learned about “Addressing the World, An Address for Everyone” and realized that many households across the world do not have street addresses, she began investigating. Her research led her to pen this fascinating history of how streets are named, who counts and who doesn’t, and what happens today when someone does not have an address. This one is a must-read.

American Cheese: An Indulgent Odyssey Through the Artisan Cheese World by Joe Berkowitz: American Cheese takes a deep dive into the world of artisanal cheese. With his signature humor, Berkowitz chronicles his path from novice to cheese aficionado. Set on this journey after attending a tasting at a well-known New York City cheese shop, he spends the next year and a half traveling the world learning more about artisan cheese. As part of this quest, he visits cheese festivals and the World Cheese Awards, learns more about American cheesemakers, takes a jaunt along the California Cheese Trail, participates in Cheeselandia at SXSW, and even attends Strip Cheese, perhaps the world’s only cheese burlesque show. This book is very entertaining and a ton of fun to read.

Becoming Duchess Goldblatt by Anonymous: Duchess Goldblatt is a Twitter phenomenon who brings light, humor and joy to those who follow her. Becoming Duchess Goldblatt describes the invention of the fictional Duchess Goldblatt and the story behind her: a lonely, grieving woman who created a fictional internet persona to bring laughter, and, inadvertently a sense of community, to the social media platform. Along the way, she befriends Lyle Lovett and others including numerous authors, inspires groups to come together in her name, and is there for those who need a helping hand. She scatters her missives throughout the book, often providing the backstory for a particular message and the responses these tweets received. Alternating between heartbreaking, heartwarming, and hilarious, this book will stay with me for a very long time; it is the antidote for 2020.

Everything Beautiful in Its Time: Seasons of Love and Loss by Jenna Bush Hager: Hager’s heartwarming and personal collection of essays honors her beloved grandparents, President George and First Lady Barbara Bush and her mother’s mother, Jenna Welch, who all died within 13 months of each other. To ease her grief, she shared their words and wisdom with family and friends, and they encouraged her to memorialize these anecdotes in a book. Hager uses various formats, including letters to her grandparents, sharing stories that she wishes she could tell them personally. Before you start reading, grab tissues – Hager’s tales are enchanting and moving and will have you pondering what matters most in your world.

Fossil Men: The Quest for the Oldest Skeleton and the Origins of Humankind by Kermit Pattison: A team fronted by the famed fossil-hunter Tim White discovered a skeleton in the Afar region of Ethiopia in the mid-1990s that substantially altered scientists’ understanding of human origins, but simultaneously triggered a seismic rift in the scientific community over the origins of humanity. Using the radiometric dating of nearby rocks, the group determined that the bones were 4.4 million years old, making Ardi (as they nicknamed the bones) a full million years older than “Lucy”, the previous oldest-known skeleton. In captivating detail, Pattison brings to life the discovery and substantiates the importance of science in helping humans understand their origins.

Nobody Will Tell You This But Me: A True (as Told to Me) Story by Bess Kalb – Bess and her grandmother Bobby shared a special bond, and when Bobby died at age 90, Bess was devastated. To commemorate Bobby, she wrote a memoir from Bobby’s perspective utilizing the many voicemails, texts and emails Bess had saved. Channeling Bobby, Bess relays the advice she received (sometimes hilarious, sometimes critical but always heartfelt) and tales from Bobby’s childhood. I laughed, I cried, and I did not want it to end.

Shit, Actually: The Definitive, 100% Objective Guide to Modern Cinema by Lindy West: In Shit, Actually, Lindy West revisits various well-known movies from the last few decades and assesses them to determine how they hold up in 2020 (hint: some do not). Using her favorite movie “The Fugitive” as the standard against which all others are judged, Lindy rates each movie on a scale of 1 to 10 and hilariously points out plot holes in movies such as Forrest Gump, The Lion King and Face/Off and scoffs at romantic movies written by men for women such as The Notebook, Love, Actually and Titanic. I listened to this one as an audiobook, which West narrates, and laughed so hard at times that I cried; it is absolutely hysterical.

Sunny Days: The Children’s Television Revolution That Changed America by David Kamp: In this non-fiction retrospective, Kamp chronicles the forces that brought Sesame Street, Mister Rogers’ Neighborhood, The Electric Company and Schoolhouse Rock! to television screens in the late 1960s and early 1970s. The shows transformed children’s television and set a higher standard for programming. A current cultural icon, the musician and music journalist Questlove (front man of the band The Roots, on The Tonight Show Starring Jimmy Fallon), provides the introduction and reminisces about what Sesame Street meant to him growing up. Sunny Days describes the impact the TV shows had on generations of children of all colors and cultures who recognized themselves in the characters they saw.

Talking to GOATs: The Moments You Remember and the Stories You Never Heard by Jim Gray: Award-winning sportscaster and interviewer Jim Gray reflects back on his career and specifically on his interviews and relationships with a number of the legends he has encountered. He writes about the famous moments that made history, but he also includes the lesser-known events such as his chance encounter with Lucille Ball, how his infamous interview with Kobe Bryant concerning Shaq and the Lakers came about, and his years-long pursuit to tell the story of George W. Bush’s decision to throw the first pitch at the Yankees World Series opener following September 11, 2011. Gray’s straightforward and informal style lends itself well to his recounting of the standout moments in his career which are often also the monumental moments in his subject’s careers as well.

Wandering in Strange Lands: A Daughter of the Great Migration Reclaims Her Roots by Morgan Jerkins: During the Great Migration, more than six million black people left their rural Southern homes seeking better economic prospects in the North, West and Midwest. Taking a personal approach to the effects of the Great Migration, Jerkins recreates the paths her ancestors took out of Georgia and South Carolina and studies the loss of familial knowledge and the impact on personal identity. Her premise provides a fresh and enthralling deep dive into one woman’s attempt to understand her roots and her family’s legacy. Thought-provoking and incisive, Wandering in Strange Lands is a timely tale. I listened to the audiobook, which Jerkins narrates.

What were your favorite nonfiction reads of 2020?

Conversations from a Page is hosting an As the Page Turns book discussion over Zoom for Musical Chairs by Amy Poeppel on Nov. 17,  11 a.m. ($5 or $30 for an annual pass). Find details here.