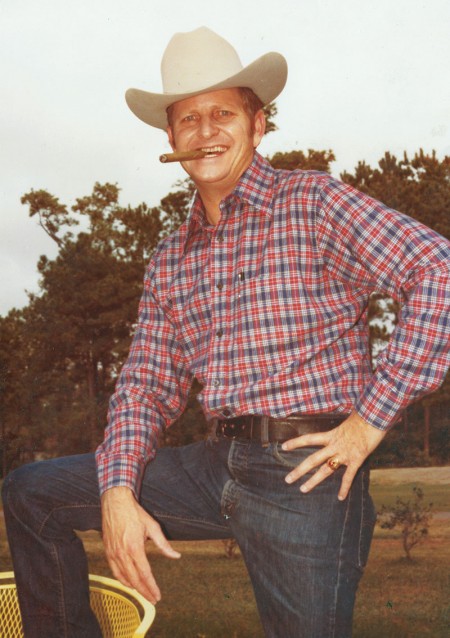 GROWING UP POLITICAL “Why couldn’t he just play golf like the other dads?” Life in the '70s with Cindy Gabriel’s dad, Clymer Wright, was anything but dull.

It’s the middle of October as I write this, publishing deadlines and such. I don’t know the election outcome. But I’m guessing nerves are raw.

By accident of birth, I found myself exposed to politics in my tweens. My father, Clymer Wright, a newspaper publisher, was a conservative, to put it mildly. The inside of my house and the outside of my house seemed like two different planets.

It’s 1968. I’m 13, getting over three summer months of parent-directed tears. (Who moves a daughter to a new town on the last day of seventh grade?) But then, it starts getting interesting: new school, new friends, make-up, bell bottoms, peace signs, rock and roll, and, most importantly, boys. Boys with long hair weren’t allowed in my house. So who do I like? Boys with long hair. Then, my father starts something called “Texans for Reagan.”

Dad, it seemed, kinda ruled the world from our couch, on weekends, between football games. He saw Ronald Reagan on TV one night and decided this new California governor should be president. So, he went to the Reagan Ranch and asked him. Seriously. Why couldn’t he just play golf like my friends' fathers?

He had a sly, devilish humor that let no one, I mean no one, off the hook, even Reagan himself.  Meanwhile, back at the Reagan Ranch, as he told it, Reagan had an “aw shucks” reluctance to run for president because he had been governor of California for only two years. “I’m afraid people will still think of me as an actor,” Reagan said. Dad’s reply?

“Well, Governor, I saw one of your movies on the Late, Late, Show [he added a Late], and I can assure you, actor is a charge that will never stick.” Dad claimed Reagan laughed uproariously at the quip while his two companions, who would later work in his administration, cringed and slid down in their chairs.

Awkward. As much as I wished my dad was more bland, like other dads, the weird juxtaposition between him, me and the ’70s lasted the entire decade, culminating with Reagan’s inauguration in 1981.

Dad’s side hobby was political fundraising for candidates and causes he liked. The yellow telephone on the kitchen bar wall was central headquarters. I marveled at his power of persuasion while working his scratchy, handwritten call list. I was sure I was missing some interesting calls myself due to the constant busy signal, perhaps a boy with long hair.

One Saturday afternoon, Dad and I were watching some football blooper show that seemed really funny at the time. I left my dad guffawing at the tube to answer a slightly annoying ring from that yellow telephone.

“Um, hold on,” I deadpanned, not wanting to interrupt the laugh fest. I waited for a commercial, then remembered, “Oh Dad, telephone. Probably a radio reporter.”

His voice stood at attention. “Governor!” he declared after hearing Ronald Reagan’s voice on the other end. It seems like a bigger deal now than at the time.

Reagan was generally regarded as unelectable. The hit comedy show Laugh-In, which ran from ’67 through ’73, did a segment called “News of the Future.” One bit began with the words “President Ronald Reagan.” That was the laugh line. I knew I would hear about it from my young, hip, liberal history teacher, Mr. Gandy. I wanted to crawl under a rock.

Mr. Gandy and my dad argued politics my entire sophomore high school year without ever speaking a word to each other. I served as their conduit, pitching arguments between the dinner table and the classroom. I was wired like my dad. He developed his own ideas about the world, and I would develop mine. Not his.

People labeled him as a die-hard Republican. But we heard more gripes about Republicans in our home than we ever did about Democrats.

A framed, albeit wrinkled picture of Dad with Richard Nixon sat on a bookshelf despite Dad’s effort to toss it, long before Watergate. President Gerald Ford, Nixon’s unelected VP replacement, became Dad’s (I mean Reagan’s) next obstacle.

A Dallas TV station caught Dad enjoying a choir rendition of Climb Every Mountain at a Republican state convention. He found one subversive line in it, “Ford every stream,” a quote that made the local news. Ford got the nomination and lost to Jimmy Carter in 1976. Finally, in 1980, Dad chaired the Texas finance committee for Ronald Wilson Reagan’s successful election as the 40th president of the United States.

I would also see him convincing his wealthy business friends to hire convicted felons who would show up at our door on occasion after serving their sentences. Dad would offer them money and a job lead.

For years he attended a racially diverse church in a poor community. It was his way of acknowledging the other side of the American coin. I don’t think he would be fond of the habit we’ve fallen into lately, of seeing only heads or tails.