The Magic of Theatre at Emery/Weiner 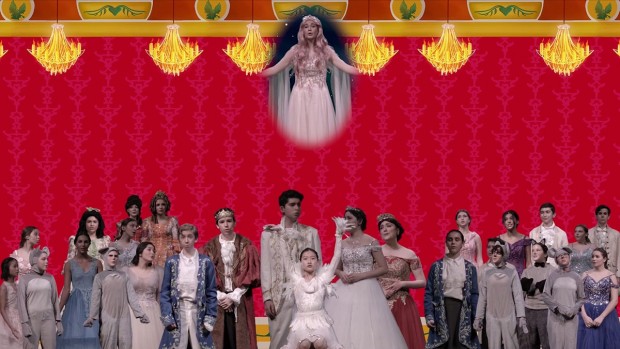 The cast of Cinderella performs for their virtual audience.

The magic of theatre comes alive when characters on stage transport the audience into another realm. The Emery/Weiner theatre department has mastered this skill over the years, selling out tickets for multiple live performances. However, live shows are becoming increasingly digital, and the Emery theatre department must adapt to bring the magic of a live performance to a recorded one.

Due to the coronavirus, the recent Emery play, Cinderella, faced many setbacks. The play's debut was scheduled for last spring. But as the campus remained closed, the play was postponed again and again. Unfortunately, this meant seniors originally in the play who graduated were recast with new performers filling the empty roles.

Junior Maddy Rose, who played a stepsister, explains, "I was one of the people recast to be in a different role, so it was a bit overwhelming having to learn the new part in a short period of time."

Along with the challenge of having a new cast, the play was also virtual. Each cast member recorded their lines separately, and the recordings were compiled together.

Even with this new process, Maddy shares that "filming was so much fun! It was also convenient because we could redo a take if I messed up."

Although these setbacks were unfortunate, performers found ways to remain positive and keep doing what they loved: performing.

Junior Julia Yanosik, who played the lead, Cinderella, says, "It was sad that we didn't get to perform the show live as we originally intended, but it was still surreal playing the title role in a show that I have been watching on television since I was little.”  Julia continued, “The magic of theatre is undoubtedly affected by this pandemic. But, even though we are not performing live, which most of us would prefer, it's empowering to see this new approach to theatre.”

The Emery/Weiner theatre department is continuing to bring the magic of theatre to the screen and will do so in the two upcoming winter performances.