Most Exclusive Sandwiches in Town: Sandoitchi in Houston

I am a sandwich fiend. I believe sandwiches are the perfect lunchtime meal - simple, yet possible to be dressed up and made elegant. When I heard about the Sandoitchi pop-up, I was more than curious. A popular sandwich company only in town for a few weeks, loved by celebrities (including Chrissy Teigen) and foodies alike? My love of pop culture and sandwiches were finally coming together!

Full disclosure, I tried the sandwiches right after I picked them up. Then, I did a second review the next day after leaving them in the fridge for 24 hours. Sure, chicken and pork sandwiches are better hot. But the true test of a good sandwich is if it’s still great (or maybe even better) the next day. 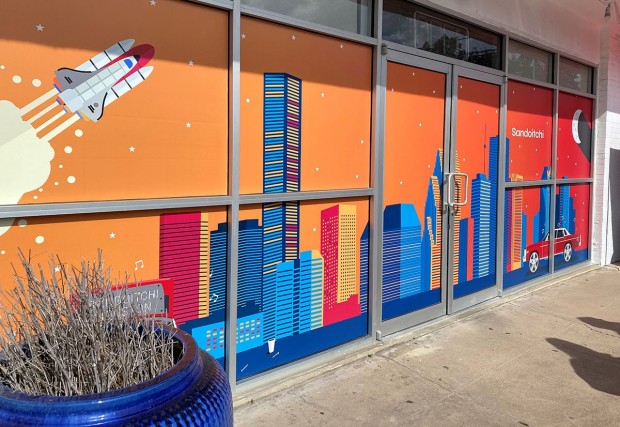 The temporary pop-up space was decorated in a Houston theme.

Before I get into what I ordered, let me give you a back story on the restaurant. Sandoitchi is a Dallas-based Japanese sandwich company, created by a former Uchi chef, and is known for its specialty milk bread and much-talked-about wagyu beef sandwich. While the truffle sandwich wasn’t available for this Houston pop-up (one of a few nationwide pop-ups happening), the sandwich company brought its top three sandwiches for Houstonians to try: Egg Salad, Pork Katsu, and Hot Truffle Chicken Katsu. The pop-up also featured a “dessert” sandwich, but I did not partake. I like my sandwiches savory!

The ordering process was stressful, whereas the pickup process was simple. For the first round of preorders, sandwiches sold out in mere minutes. I consider myself a quick “clicker,” due to many experiences with buying concert tickets online. But after dodging a meeting in favor of ordering sandwiches and subsequently watching the sandwiches sell out as I speed-typed my credit card number, I realized that I was out of my league. The second pre-order go-around, I was ready, ordering within a minute. Pick-up was the following Saturday between 1 and 2 pm. I arrived in the (socially distanced) line, checked in, and picked up my sandwiches within five minutes of arriving. For all the stress in ordering, the pick up was everything but.

To make sure I wasn’t biased towards anything, I got a second opinion. My mom’s reviews, below mine, are the perfect “tl;dr” for each sandwich, so thanks to my mom! 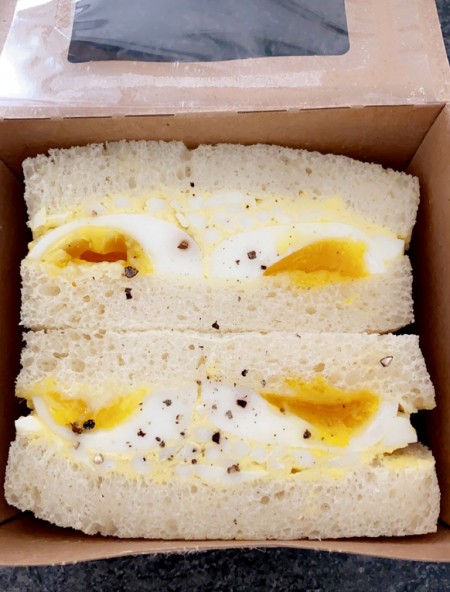 The Egg Salad sandwich was simple but delicious.

Egg Salad
This was the first sandwich I tried, mostly because (full disclosure) I don’t like egg salad. But in the name of journalism, I gave it a try! The bread was the first thing I noticed. It was soft and feathery-light. That mixed with the lightness and simplicity of egg salad was actually pretty heavenly. The dusting of pepper on top was not only aesthetically pleasing, but pretty necessary to add a kick to an otherwise lowkey sandwich. I probably would’ve/should’ve added more. A pleasant surprise! Did I enjoy it? Yes. Would I order it again? Unclear.

Mom’s thoughts: “This was better than I thought it would be just based on looking at it.” My (millennial) rebuttal: “My snapchat followers said it looked good!”

Pork Katsu
The sauce covering the katsu-d pork was great: like a light, sweet BBQ sauce. The tiny amount of cabbage on the sandwich really made it seem like a better version of a pork sandwich with coleslaw. The pork was definitely thick, making for a difficult bite, but considering the small size of the sandwich and the easiness in handling it, I have no complaints here.

Mom’s thoughts: “This is a pork chop with breading.” 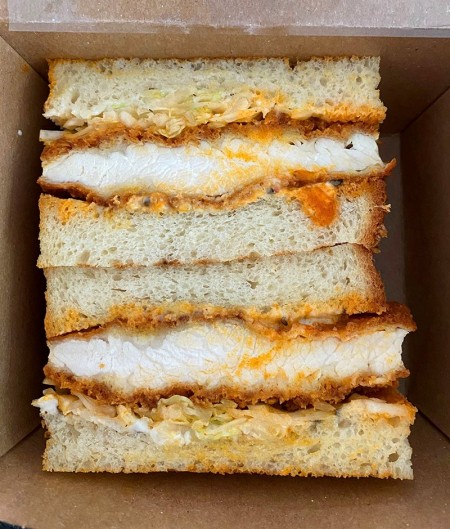 Hot Truffle Chicken Katsu
For me, few things compete with a good chicken sandwich. What makes a chicken sandwich good? In my opinion, the chicken should be fried, the bread should be great, and there should be little else on the sandwich to take away from that. The hot truffle chicken katsu sandwich lives up to those expectations. The chicken is covered in hot sauce much like you would find on the tables of any good Texas restaurant. The hat it brings to the sandwich adds an extra oomph to the chicken, making the sandwich both delicious and engaging in each bite. Some bites were not spicy at all, while others forced me to find some water (mostly because I am weak). I was excited to taste the truffle part of the sandwich, but I’m not really sure that that came out. Maybe the truffle alleviated some of the heat from the hot sauce and I just didn’t notice it, but I would’ve liked to have tasted a little bit more of the richness that we all expect when we hear the decadent word “truffle.” Of the three, this was my favorite, and is worth coming back for.

Mom’s thoughts: “If you like hot wings, you would love this.”

After missing the first round of pre-orders, I had my mind set on getting a taste of this famed sandwich. I had high expectations for these sandwiches, but maybe I created these overexpectations for myself. I’m glad I tried these, but if you’re sad because you missed out, I wouldn’t fret. Overall, Sandoitchi gets hyped up because of its exclusive offers and limited time in each city. But you still have time to try Sandoitchi for youself. The pop-up will be in Houston until Nov. 21, so check out their social media for order and pick-up announcements. 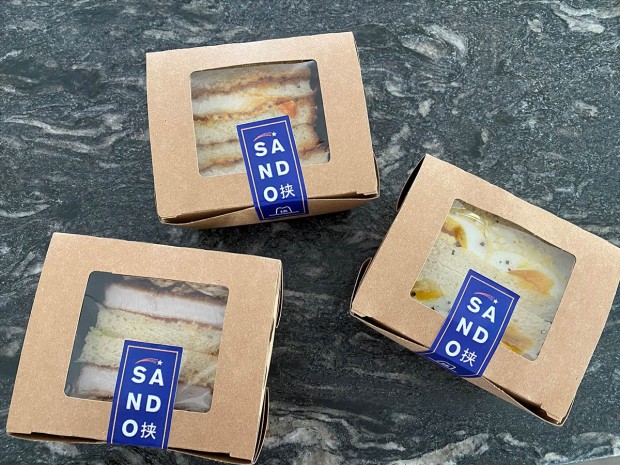 Sandoitchi, a pop-up sandwich shop from Dallas, will be in Houston through Nov. 21. 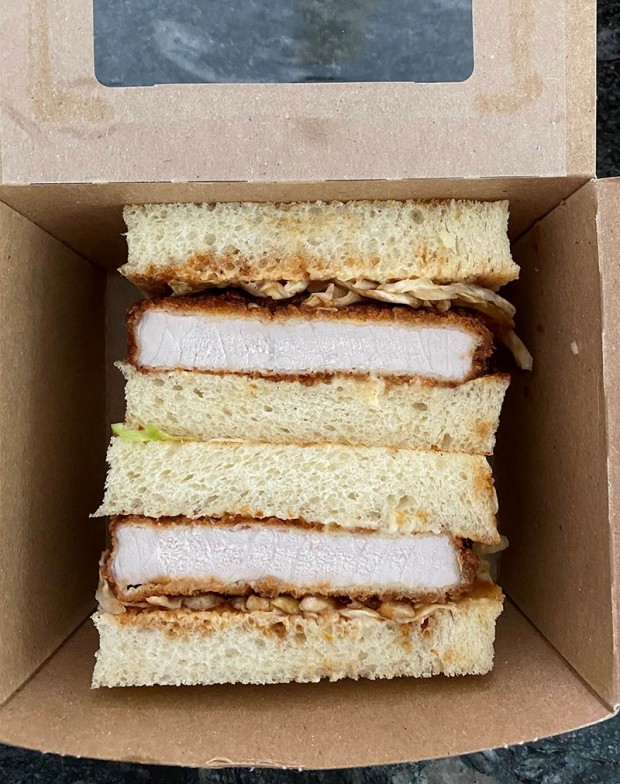 The Pork Katsu sandwich was one of the three sandwiches Haley Kurisky tried at Sandoitchi. 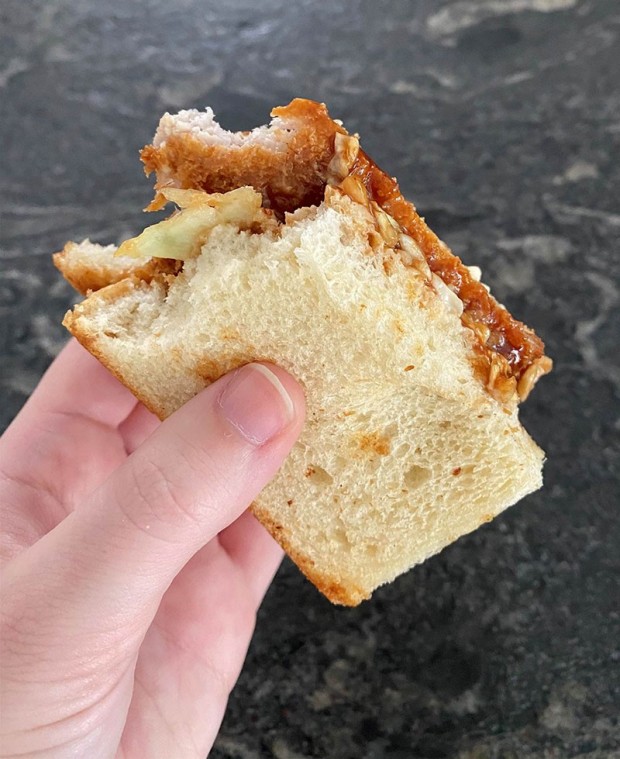 The Pork Katsu sandwich was layered with thick pork, shredded cabbage, and a creamy sauce.