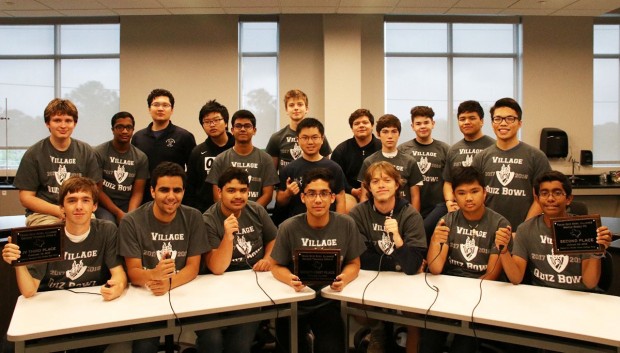 Amidst the current COVID situation, many events have gone virtual. From school to meetups, almost everything has transitioned to an electronic medium with varying degrees of success.

Taking a step back, what is Quiz Bowl and how would COVID impact it? Quiz Bowl is a trivia competition in which two teams compete and try to outscore each other. Each team consists of four members. Two types of questions are asked - tossups and bonuses. Tossups are individual. There is no talking allowed between teammates. Once a tossup is answered correctly, the leading team is read a bonus and they are allowed to communicate with their teammates for the three questions in the bonus set.

I have competed in Quiz Bowl at the Village School for several years. We were all excited about how the new format would look. The first virtual team from Village comprised of five players - me, Hursh Jha (senior), Amaan Ahmed (junior), Yusuf Fawzy (junior), Harry Leaw (freshman) and Isaac Edelman (freshman).

While it may seem obvious that the transition to Zoom would be easy, that was not the case. Often, the person who gives the correct answer is determined by fractions of a second. To remedy this issue, participants were told to have the word "buzz" written in the chat feature. And once we knew the answer, we would hit enter and verbally say "buzz" at "the same time. Then, we have to wait for the moderator to recognize the first buzzer and say our answer.

The overall structure was fairly organized. Each match had a dedicated Zoom and was structured on a Google Sheet. The stats and real time positioning of each team were also visible. This provided a sense of competition and gave us an idea of how much we had to perform to place highly.

As with any academic event hosted online, the question of integrity came into the question. To be fair, all was done that was possible. Participants were required to remain unmuted to ensure no one was telling them answers, and they had to keep a face cam on to see what they were doing. Despite this, though, the question of academic integrity came up several times, but due to the rooms not being recorded, it was impossible to verify the challenges.

Furthermore, as Isaac recounts, “The only grievance I have is that Zoom makes collaboration on bonuses difficult.” Zoom eats up the words spoken during lag, making it difficult to collaborate quickly.

In the end, though, I feel like the spirit of Quiz Bowl was captured in this online environment. Isaac said, “I think that they have done a good job adapting Quiz Bowl to the virtual environment. During the previous tournament I went to, the tournament experience didn’t feel much different from going to an in-person tournament."

Everyone was able to collaboratively work on bonuses and have the same friendly competition throughout. I look forward to seeing how Quiz Bowl will be able to adapt to the current situation!