A Retake on a Thanksgiving Classic: Green Bean Casserole 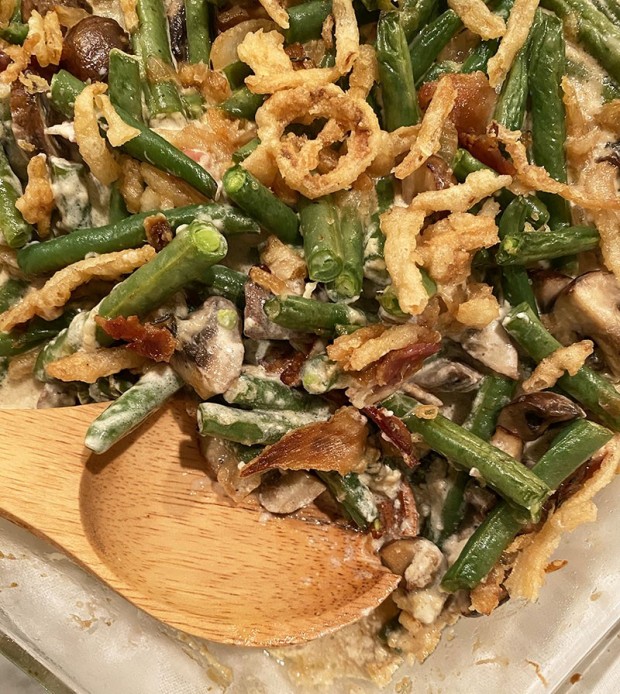 The Thanksgiving Green Bean Casserole gets a new life apart from the tired old can of mushroom soup.

It’s simultaneously one of the most beloved and most maligned staples on the Thanksgiving spread: The Green Bean Casserole.

Traditionally made with a goopy can of cream of mushroom soup, the green bean casserole is a throwback to the ‘70s era of TV dinners and…canned soup. But we are no longer wearing bell bottoms and eating Salisbury steak. We’ve come a long way. Green bean casserole notwithstanding.

This green bean casserole retake will have you loving green bean casserole in a whole new way. Gone is the gelatinous “soup,” which we replaced with sour cream and heavy cream (it’s Thanksgiving – save austerity for another day), plus some Monterrey jack. A little cayenne makes it spicy (leave it out if you’re not a fan), and bacon makes it smoky (again, leave it out if you prefer a meatless version).

We stuck with the ‘70s and kept the French’s onion rings because somehow that’s still everyone’s favorite. If you have moved on, try some panko dotted with butter as a topping.

Recipe directions:
Preheat the oven to 350 degrees. Spray a 9-by-13 inch baking dish with nonstick spray.

In another bowl, whisk together the sour cream, heavy cream and cayenne until it is smooth. Stir in the cheese, and then stir in the green bean mixture. Crumble the bacon, and add it to the green beans. Pour into the prepared baking dish. Top with French’s onions. Bake for 30 minutes, until the top browns and the cheese bubbles. Let the green beans sit for 10 minutes before serving.

8:30 am to 10:00 am
Location:
Westbury Christian School
END_OF_DOCUMENT_TOKEN_TO_BE_REPLACED