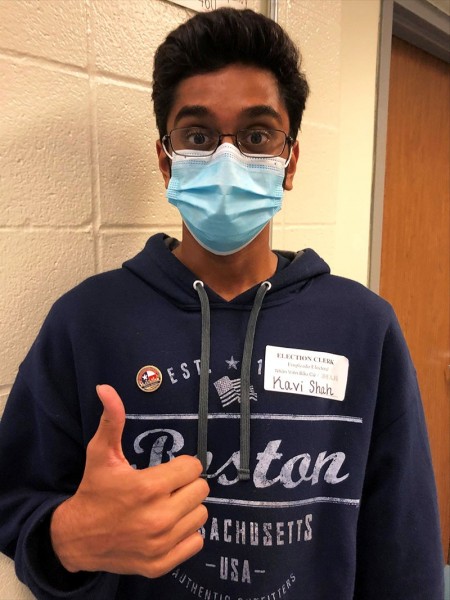 Kavi Shah ends his day as an election clerk with (presumably) a smile on his face.

On Nov. 3 at 5 a.m., Kavi Shah arrived to where he would be spending the next 15 hours of his life as a student election clerk. It was completely dark out, the parking lot was empty, and he was doubtful that over the next hour, he and his fellow election workers could transform the elementary school gym into anything resembling a polling place.

Even though Kavi, a junior at Bellaire High School, is too young to vote, he felt that it was his civic duty to get involved in the election.

“This election was super important in deciding the fate of our country, so I thought I might as well contribute to democracy," said Kavi. That meant rotating between being a greeter, checking people in to vote, and being a floater (helping people who did not understand how to work the machines or were having other issues).

While that may sound simple, there was actually much more involved. “The amount of work that goes into everything - all of the stuff that goes on behind the scenes- it all seems easy, but there is a whole time-consuming process of setting things up and taking the necessary steps to make sure everything runs smoothly for the voters,” he said.

Luckily, the elementary school's gym was transformed in time. Kavi and the other election workers had successfully connected the daisy chain of chords to power on the voting machines, learned how to use the e-poll book, and taken the oath to be a poll worker.

Despite working a very long, often slow day, some moments stood out to Shah, who encountered a variety of situations ranging from fascinating to frustrating.

“There was one couple who refused every single safety precaution we offered, which was interesting,” says Shah, who added that he was just as frustrated when voters would come in unregistered to vote or who discovered they had been purged from the election rolls despite voting in the past election. Those people were left with only one option - register to vote for the next election. Kavi recounts how he and his fellow election workers often felt upset for those people, especially since so many of them came in so excited to vote.

"It was a reminder to me of how many obstacles there are for some people to vote, and how important it is that people check to see if they are registered," he said.

While the polling place where Kavi worked was relatively quiet, he and the other election workers were exhausted by the time the doors closed at seven that evening. However, there was still another hour ahead of them to power machines down and pack things up to be returned to Reliant Stadium by the election judge.

For anyone interested in working future elections, Kavi has some sage advice: "Watch out for your ankles when you are dissembling and putting away the machines. The sharp edges feel kind of like a Razor scooter."

By the time Kavi’s dad picked him up later that evening, he felt that it was worth the time and energy.

“I really learned a lot. Nobody realizes how much it takes to set up a polling place and how much information you have to learn to be able to deal with the problems you encounter. When I finally get the chance to vote in two years, I will definitely not take it for granted."