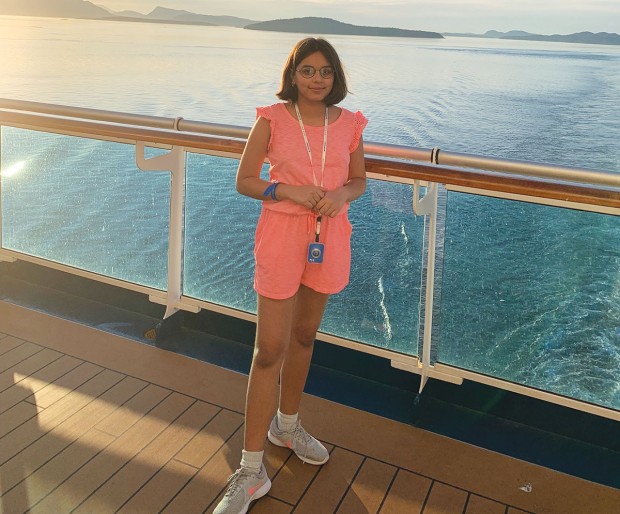 CLIMATE CRISIS Kashika Adhikari, a seventh grader at T.H. Rogers, hopes everyone will see the “warming warning” glaciers are giving us.

Ever since a summer camp at age 11 where I studied the climate crisis, I have deveoped an interest in studying global warming. I learned mind-blowing facts on carbon emissions and humans’ impact on our environment.

On a vacation to Alaska last summer, our tour included a visit to the Mendenhall Glacier in Juneau. It was a fascinating sight, but that feeling didn’t last long when our tour guide described what the “water surrounding the glacier” meant. This shrinking Alaskan glacier was once a massive iceberg, that consisted only of ice, with little water surrounding it. As I looked at the view, I knew that this was a “warming warning.”

This compelled me to do some research to look into the facts. When fossil fuels are burned, they release large amounts of greenhouse gases into the air. According to the UCAR (a nonoprofit research consortium), about 5.5 billion tons of carbon is produced each year by burning fossil fuels. Of that amount, 3.3 billion tons stay in the atmosphere, causing pollution. That’s enough to severely impact Earth's climate, making it unhealthy for humanity.

We are using the wrong energy to combat climate change, and we have alternatives. A cleaner, carbon-free and affordable alternative is nuclear energy. According to Scientific American, nuclear power may have saved 1.8 million lives otherwise lost to fossil fuels and could possibly save up to 7 million more. According to energy.gov, nuclear has the highest capacity factor of all energy sources, meaning nuclear power plants are producing maximum power for over 93 percent of the time during the year, which is more than the 47.5 percent for coal.

As a seventh grader, I have hope to defeat this global catastrophe. Having a passion for a clean world, I want my activism towards climate change to make a difference so we can stop delaying this. We are the last generation with a real opportunity to save the world.