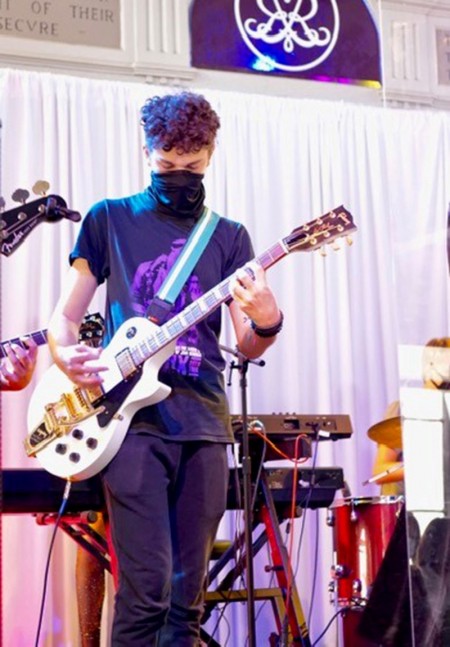 Zain Moughrabi, an electric guitarist, performs with the house band through School of Rock Memorial.

This week’s Name That Tune is brought to you by Zain Moughrabi, a student at School of Rock Memorial. Zain started with classical guitar then dove headfirst into electric when he found a love for rock and blues. We interrupted Zain during his weekly lesson at School of Rock Memorial and chatted with him and his teacher, Marc Reczek. Read on for excerpts from our interview and watch his video to see if you can guess this holiday edition of Name That Tune.

How did you start playing guitar?
Zain: My dad and my uncle played guitar basically their whole lives, but they played classical. My dad wanted me to follow his footsteps, but I figured it wasn’t my type of music. So I dove head first into rock and blues. I would say that’s more my type of music!

Have you ever played classic guitar? Or did you go straight to electric?
Zain: I played some classical, but I was mediocre at best.

In addition to playing at School of Rock Memorial, are there musical opportunities you pursue at school?
Zain: I am in guitar class, and I tried out for jazz band. I haven’t found out if I’ve gotten in yet.

I’m sure you’re learning music theory and how to sightread in guitar class. How is that similar to or different from how you are taught at School of Rock?
Marc: I can say it in a really simple way. We teach song and performance in a way to deliver music theory education. We get student up and playing. They learn so much quicker!
Zain: It’s an easier way to learn the music, for sure.

What is the setup of guitar class?
Zain: Really, it’s for a beginner learning their way around the instrument.

Would you consider yourself a beginner?
Marc: No.
Zain: The class is a little slow paced for me.

Through School of Rock, what kind of gigs have you played?
Zain: We play gigs with the house band.
Marc: What the house band does is represent School of Rock in Memorial. They had on their schedule some Christmas events. Unfortunately, they got cancelled. But that gig is why Zain and the other musicians were ready with a holiday song for Name That Tune! We were set to play at a Santa Meet and Greet at the end of November, but we got rained out. We don’t have anything else coming up but the School of Rock Memorial has two big performances coming up on Jan. 29 and Jan. 30

Are these performances open to the public?
Marc: They are open to the public and socially distance. We already did one, and it was a big success. We did it at Rockefellers and we space everyone out. There is plenty of room for a big audience.

It sure is special the kids get to play at such an iconic venue. Can you tell me about that?
Marc: Rockefellers is a legendary Houston music venue. It is a former bank that is on Washington Avenue. Major bands and huge important acts have played there! School of Rock is a performance-based music school. We teach kids how to work together with other kids to form bands and how to do performances. We teach them everything from marketing to writing and promoting and recording records. So that’s why you know Zain now!