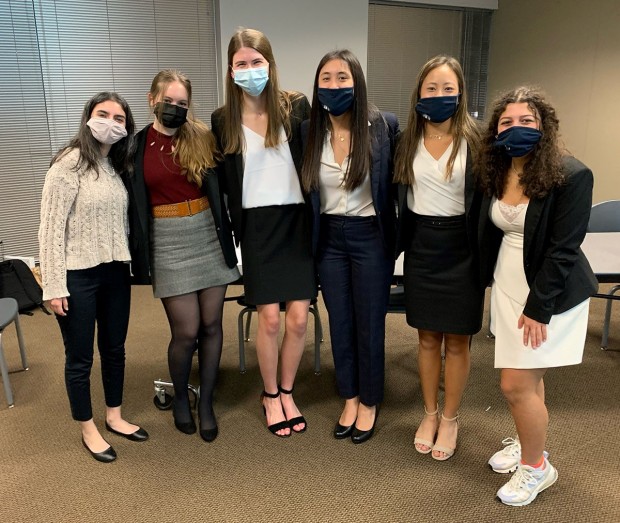 For students who have an interest in the judicial system, there is a perfect elective offered at several high schools. Mock Trial is an elective class offered at schools that focuses on skills like learning trial practices, effectively arguing laws, and case building.

Once students have signed up and gained admission into the course, Empire gives them and their teammates fake documents with which they can build a case. These documents might be photographs of a 'crime scene', affidavits, expert reports, witness statements, 9-1-1 calls, physical evidence left at the scene, or a variety of other sources. Trials given can be anything from a civil lawsuit to a murder mystery, or, in this year's case, a burglary charge. Currently, St. Agnes has four active teams who will compete this season.

Student compete with teams from all over the U.S. Some teams are even international. This year, however, Mock Trial was held virtually. The competition was unorthodox this year, but the teams were very excited. Mock Trial students were ready to take on the new challenge presented by coronavirus.

There were two distinct ways teams can compete through Empire this year. The first, Empire @ Home, took place entirely virtually. This competition style is precisely what it sounds like- students compete from the comfort of their own homes. Anyone partaking in that particular round joined a Zoom call with their team members. From there, they joined a Zoom with the members of the opposing team.

The second option, entitled Empire One, was slightly different. In this model, students met in person with their teams and virtually competed with other teams as a group. At St. Agnes this year, all four teams competed through Empire One in mid-November. The case up for dispute this season was a burglary accusation, and it contained many challenges that were both difficult and fun to work around.

The case up for contention this season wass Charlie Wilder vs. Taylor Amelia. In this case, Wilder faced charges of breaking into the Amelia home when Wilder thought the Amelia family was out of town. Mr. Amelia was on a business trip, and Mrs. Amelia and her 5-year old son Tevin were at home. If Wilder was indeed convicted, she will face jail for the rest of her life due to something called the third-strike-rule that comes into play in this particular case. Wilder has two previous felony charges - drug-related and another burglary charge. Another charge would activate the rule and Wilder would be locked away forever.

My team accepted the challenge of defense, which means we represented Charlie Wilder in the competition. We had three attorneys whose job was to direct and cross witnesses, present pre-trial, openings, and closings. Additionally, we called three out of four witnesses, who include Charlie Wilder herself, an alibi witness, and an expert witness.

In this case, Wilder was a guest witness. A guest witness is a witness from another team who your team will work with during the competition. Each group meets with their guest witness for the first time on the day of the trial. An alibi will testify regarding the defendant's alibi. In this case, our alibi witness is also a testament to the character of Wilder. The expert witness is a memory formation expert. The expert testimony will concern the use of the controversial Reid Technique during police interrogation, which might have lead to an inaccurate or else unreliable confession on Wilder's part. The witness we chose not to call is the person in charge of Wilder's rehab, who would have testified that Wilder was not on any drugs at the time of the conviction.

The case may seem hard for the defense, but we only had to prove that the prosecution could not prove Wilder's guilt beyond a shadow of reasonable doubt. It was not easy, but we had a strong team.

The competition began with the opening ceremony, which was held over Zoom and hosted over 200 participants. The ceremony itself started with the team videos. I counted at least two Friends themed videos, and there was plenty of early 2000's nostalgia. After that, a student from each country, took a turn and sang their national anthem. The next part of the ceremony was a keynote speaker, Mrs. Susan Champion.

Mrs. Champion, as the director of the Stanford Third Strike Rule Project, spoke to the competitors about the real and devastating impacts of the rule. She explained the importance of her work and the issues of the third strike rule. Her speech was almost a wake-up call for the competitors, as it made our case real. Her words provided weight and severity to the competition.

After her speech, the leaders of the ceremony began dividing the students into breakout rooms to meet one another. The breakout room conversations were terribly awkward at first, even with the leaders providing conversation topics like "if you could take any witness out to dinner, who would it be, and why" through the chat. Eventually, my group started talking about music, which both provided a reprieve to our discomfort, as well as allowing me to find not only a fellow Mother Mother and The Crane Wives fan, but more fans of French pop as well.

The last part of the ceremony was the challenge order. All four St. Agnes teams were challenged first, with my team receiving a challenge from Venture Academy. Such a challenege was a little disconcerting, as Venture had won the Empire Competition the previous year (spoiler alert: they won this year too). My team decided that defense would take on Venture, and we all went to bed equally excited and nervous for the next day.

For the first round of the competition, my team's defense was competing against Venture Academy. We had to be at school at 9:30 a.m. that Saturday, but the actual competition did not begin until around 11:30 a.m. Unfortunately, one of our attorneys was unable to attend the competition, so a sophomore from the prosecution team took her place.

Katie Garofolo-Ro ‘23 did an excellent job. But the sudden change shook us all up. My team lost this round, but not by very much. The point difference was about 11.5, which is admirable for Mock Trial. We ran short on time in the end, but with the truncating of a few directs, we managed to finish within the 55 minutes allotted for the defense case, and the trial ended around 2:30 p.m.

Round two began around 4:30 p.m., and since I was playing timekeeper, I got to stay and watch the whole thing (which ended around 8 p.m.). Our prosecution team was competing in this round, and they tied with the other school. For most of them, it was their first time competing in a Mock Trial competition, but I think they did a commendable job and certainly held their own.

The next day brought rounds three and four. In round three, our prosecution team members were competing. They were up against a team from China, who told us that it was the middle of the night where they were. At the start of the trial, there were some screen-sharing difficulties, as one might expect with a virtual competition, but they were shortly sorted, and the round was able to proceed. The prosecution had identified a lot of weaknesses in their previous round, and so round three was a lot more polished. Although they lost, it wasn't by much and everyone agreed that they did a wonderful job. Finally, it was time for round four.

The last round of the competition began around 4:30 p.m. again, and the defense part of our team was to compete. Having realized we would be short on time thanks to our previous run of the case, we had cut a lot of our directs down and practiced the new timing the night before. We were well prepared and ended up tying with the other team. Our team may not have won any round, but I'm sure I speak for everyone when I tell you that it was an enjoyable way to spend a weekend.

While all the teams would have of course preferred to go to New York for the competition, we all had a lot of fun and learned a lot during our virtual competition. It was exhausting, with some members (including myself) staying on campus for up to 12 hours each day. In this time, witnesses would compete for maybe 25 minutes at most and the attorneys for maybe an hour and a half at most.

Nobody got any homework done and all we wanted to do was take a nap, or at least have a real lunch. Despite all of this, everyone I talked to afterward agreed with me in saying that it was a wonderful experience. In the end, St. Agnes 1 won the spirit of Empire award, which was both a huge honor and increased our excitement for future competitions.