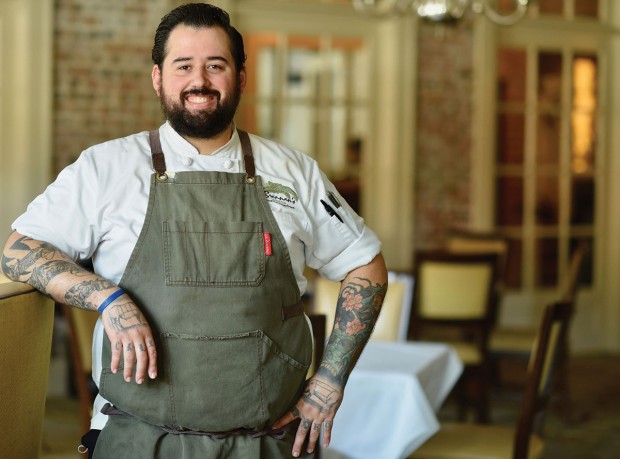 The Brennan family has mentored countless talents through the decades, including celebrity chefs Paul Prudhomme and Emeril Lagasse. Both honed their skills at Commander’s Palace in New Orleans. Meanwhile, across state lines, its younger sibling, Brennan’s of Houston, has nurtured talents such as Randy Evans, Danny Trace, Chris Shepherd, and Joe Cervantez. Now add another: Joey Chavez.

Unlike Brennan’s past executive chefs, Chavez didn’t rise through the ranks: “We’ve never hired someone from the outside to be executive chef. I don’t think it’s ever been done since I’ve been here,” says general manager Carl Walker, who helmed the kitchen at Brennan’s of Houston in the late ’80s and ’90s.

But when Chavez’s résumé came across his desk, something told him and owner Alex Brennan-Martin to delve deeper. Walker visited Chavez in Baltimore, where Chavez was executive chef at The Bygone, a rooftop restaurant at the Four Seasons. It wasn’t Chavez’s appearance on Food Network’s Chopped or being named “Best New Chef” by the Baltimore Sun Readers’ Choice Awards in 2019 that landed Chavez the job – it was his zeal for sharpening his culinary skills constantly.

Below, 32-year-old Chavez, currently planning Brennan’s Mardi Gras celebration Feb. 16, discusses snaring one of the most coveted chef positions in the South, as well as his favorite Houston restaurant for crab cakes.

You were born and raised in Southern California. How did you land in Texas?

I got a football scholarship from Lamar University in Beaumont, but I knew that I would never go to the NFL. I wasn’t big enough, being barely 6-foot tall. Once football ended, I knew I wanted to be a chef.

Did you work at Pappadeaux while working on your bachelor’s degree and culinary degree at Lamar?

I was a crawfish cook. At the same time, I was working at a sushi bar, called Koi. I was also commuting to Lake Charles to work at La Truffe Sauvage, a little French restaurant. I really fell in love with the refinement and discipline that went into cooking at La Truffe Sauvage. Every night, the owner, Arthur Durham, was there cooking with his partner, Mohamed Chettouh. The two were on the line every night making everything from scratch with the help of only two other people.

One of the things that impressed the folks at Brennan’s was your relentless drive to expand your food knowledge. After college, in 2012, you started at Wolfgang Puck’s Spago at the Ritz-Carlton in Colorado. In less than a year, you worked your way up to sous chef. What came next?

At the Ritz-Carlton, I discovered what Michelin was and who Thomas Keller was. It became my main focus to work for the best of the best. Every time I had off, I staged. I made it a point to stage [intern without pay] at every three-Michelin-starred kitchen in the U.S. The one I missed was Chef’s Table at Brooklyn Fare [in New York]. I never was able to get in there, but I staged at Le Bernardin, Per Se, Masa, Dovetail, Nomad, Eleven Madison, The Restaurant at Meadowood, and others.

I saw all these great chefs, and they all had worked for Thomas Keller at one point. So, that’s what I got to do. Every time I sat down to a computer, I would send my résumé to Thomas Keller. I finally got a call to do a stage at The French Laundry, then I ended up getting a position there and his other place, Bouchon.

In 2016, you became chef de cuisine for James Beard Award-winning chef Charles Phan’s OTD in San Francisco, followed by the legendary private club, Caribou Club, in Colorado, then The Bygone. Share a technique that you learned from staging that you used regularly at these places.

To get lobster to a perfect medium-rare, you bring water and vinegar to a boil, then you pour it over the lobster. Let it sit in the water-and-vinegar mixture for four minutes in the sink before draining. Now, you can remove the lobster cleanly from the shell and toss it into pastas or garnish soups or salads.

You arrived at Brennan’s of Houston right when restaurants were forced to do curbside pickup or delivery because of Covid-19. Have you had a chance to try out any of our city’s restaurants?

There is an Italian restaurant near my house, Lomonte’s Italian Restaurant and Pizzeria (815 Plantation Drive, Richmond). The fried ravioli and pizzas are fantastic. They have a great baked rigatoni with homemade sauce, peppers, and ricotta. I’ve also been to Loch Bar (4444 Westheimer Road). They have one of the better crab cakes around. Coming from Baltimore, I miss the crab cakes. And their negroni cocktail is really good. When this is over, I hope to make my way to Ostia (2050 Dunlavy St.). Travis McShane worked for Jonathan Waxman.