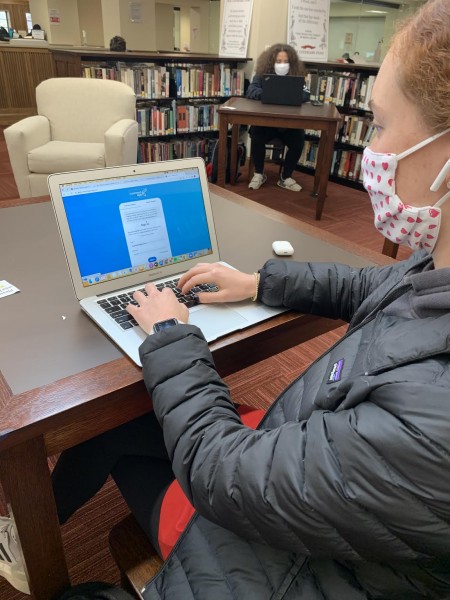 Senior Lauryn Kapiloff logs into her Common App account to check the status of her college applications.

On the afternoon of December 18, the first day of winter break, the St. John’s Class of 2021 GroupMe was abuzz with conversation. My classmates filled the chat with investigative polls, satirical memes, and, of course, a plethora of contrasting opinions.

It all started with an interactive poll sent by one of my peers, proposing the creation of an Instagram account through which our college decisions could be announced. Such social media profiles have been made for the senior classes at The Kinkaid School and Episcopal High School, and the idea appealed to many of my classmates.

The initial poll received substantial feedback, garnering 60 votes in support of the account and 32 votes against it.

After several hours of debate, the decision was made to postpone the account’s formation until the spring to allow time for more decisions to roll in. In mid-December, after all, the majority of my classmates had either not heard from many of the schools they applied to, or had not yet committed to their college of choice.

According to the amount of likes afforded to certain comments, the consensus was clear: waiting a few months and posting decisions on a voluntary basis would be the ideal way to celebrate our class’s accomplishments without causing excess stress.

While I am eager to see where my friends will spend their next four years, I am no stranger to the anxiety-inducing uncertainty that is common among those in the middle of the application process.

SJS instills in its students the ideal of “spirited devotion,” an intense passion and appreciation for our Maverick community. However, when under pressure, this shared sense of pride can easily convert into competition, and college talk is sometimes considered toxic. I believe, though, that things are only toxic if you make them toxic, and it’s important to normalize healthy, wholesome, and supportive dialogue.

One of my closest friends told me about a conversation she recently had with a classmate of ours. Without naming either student or the college in question, I can provide the context: my friend received disappointing news from their college of choice, while the other individual was accepted to the same school.

Rather than acting out of spite and ignoring our classmate’s accomplishment, my friend chose to congratulate and praise the accepted student.

This gesture, while seemingly simple, displayed an enormous level of maturity that I hope will continue to manifest itself throughout the decision season.

While the SJS college counseling department does an incredible job of guiding students through decisions, emotions, and everything in between (I’m convinced my counselor and the department head, Jamie Kim, is an undercover superhero), I have found that listening to the personal experiences of those who have recently undergone the college process is an equally rewarding way to alleviate stress.

One of my favorite pieces of advice came from Claire Seinsheimer (‘20), a freshman at the University of Miami. Upon receiving disappointing news of my own, Claire provided a meaningful perspective.

“There are so many times within the process that I felt like I hit a dead end, whether it be with standardized testing or writing essays or dealing with rejections,” Seinsheimer noted. “While it doesn’t seem like it at times, you really do have to trust the process. You will genuinely end up in the right place if you make the choice for yourself [while] taking into account your mentors’ opinions.”

It is normal to feel helpless or overwhelmed at a time like this, but an advantage of this vulnerability is that it has allowed me to lean on my friends and fellow applicants. I have become more confident as I have strived to implement this optimistic outlook. After all, we’re all in this together.