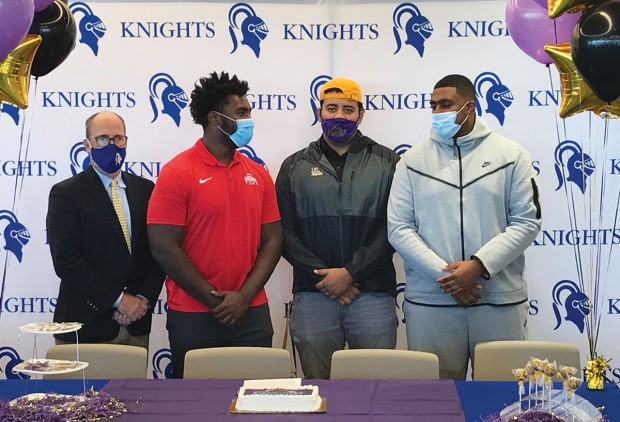 For Episcopal, the Knights are sending a trio of offensive lineman to the collegiate ranks, led by 6’4”, 308-pound Ohio State signee Donovan Jackson. Jackson, who had verbally committed to Ohio State last year, was recently named the winner of the Anthony Muñoz Lineman of the Year award, which goes to the nation’s top high school lineman in the class of 2021.

“To be ranked as the No. 1 player in the country is incredibly special,” said Episcopal head football coach Steve Leisz. (Former Episcopal Knight Walker Little, who went on to star at Stanford, won the same award back in 2017.) “I’m just blessed and grateful for everything that’s come my way, and I plan on continuing to work hard to achieve my dreams,” said Jackson.

Another Power Five Conference signee for Episcopal is offensive lineman Cullen Montgomery, who will play college ball for the Oklahoma Sooners. The 6’5”, 315-pound Montgomery is a 4-star prospect who’s ranked among the state’s top offensive tackles. “It’s been fun to watch Cullen mature over the years. He’s a raw talent that Oklahoma will mold into a great player,” said Leisz.

Rounding out the trio of signees for Episcopal is another standout offensive lineman in Luis Chavarria, who started all four years for the Knights. Rated as one of Greater Houston’s top interior linemen, Chavarria signed with Prairie View A&M. “Luis is the ultimate team player and a guy who cares for everyone. He’ll make an immediate impact at Prairie View,” said Leisz.

With the signings of Jackson, Montgomery, and Chavarria, Episcopal continued its trend of sending an incredible haul of offensive-line talent to the next level, including Little at Stanford as well as Florida State star defensive tackle Marvin Wilson, Little’s 2017 teammate at Episcopal. “It is pretty amazing to have all those phenomenal linemen represent our school at the next level,” said Leisz. 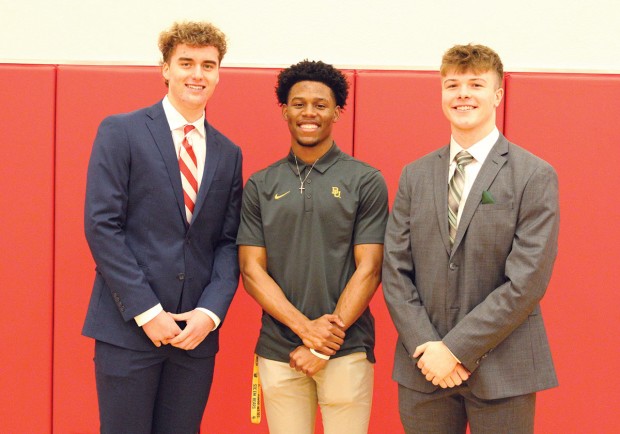 Kopp, who had earlier verbally committed to the University of Houston, officially signed on with the hometown Cougars. In just nine games this past season, Kopp threw for 3,100 yards and 30 touchdowns. During his illustrious career at St. Thomas, Kopp totaled over 6,000 passing yards with 57 touchdowns. He was among the invitees to the Elite 11 camp, which brings together the nation’s top high school quarterback prospects. “Maddox is not only a great talent, but he’s also a tremendous leader,” said St. Thomas head football coach Rich McGuire. “He did a great job of keeping our team focused all season.”

One of Kopp’s favorite targets, Bonner will now take his receiving talents to the Big 12, having signed to play for the Baylor Bears. This past season for St. Thomas, Bonner had over 760 yards in receptions despite playing in only seven games. Over the last two seasons, he accounted for 20 touchdown receptions while averaging a lofty 24 yards per catch. “Cameron will be a really terrific slot receiver in college,” said McGuire. “The really big thing about Cameron is that he’s also blazing fast.”

Martinez honored his earlier verbal commitment and signed to play for Colorado State. Over the last two seasons, Martinez accounted for 1,240 receiving yards and 11 touchdowns for the Eagles. “Drake really fell in love with the place when he went there last spring on a recruiting visit,” said McGuire.

“Drake, Maddox, and Cameron have a tremendous work ethic. It’s also really great for our St. Thomas football program to receive the kind of notoriety with the signing of these three outstanding individuals.”

Over at Lamar High School, the Texans celebrated early National Signing Day with the signings of defensive backs Lamont Landry and Khai’mon Samuel. Both of the senior standouts are heading to Prairie View A&M. “Lamont and Khai’mon are extremely physical and athletic players, so I expect great things out of them,” said Lamar head football coach Mike Lindsey.

“The other terrific thing about those two guys is that they are both outstanding students, with high GPAs, so they’ll represent Lamar nicely at the next level.”