Y2K at St. Agnes: A WinFo to Remember 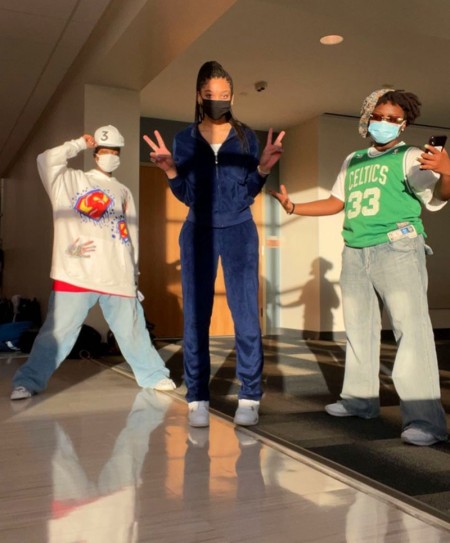 Long dresses flow back and forth as bare feet dance in different patterns on the tiles of a dark wooden stage. A flood of disco lighting swings back and forth, highlighting different girls on the dance floor. When well known songs come on, everyone stands up and sings their heart out, joking around with nearby friends, spending time with old and meeting new.

Outside at the entrance, beautiful shimmery balloons decorate a photo booth and different props are scattered loosely on a cloth tablecloth. Everything is perfect. The ornate outfits, the fancy hairstyles, the creative makeup, but best of all the fun memories made.

WinFo has always been one of the events SAA students look forward to the most each year. From the excitement of going to a friend’s house before to get ready to the anticipation of crowning a senior as WinFo queen, this dance gives students a chance to get away from their extremely busy schedules to enjoy a night off with friends.

However, this year, due to Covid-19 and strict Harris County guidelines, a typical WinFo was not possible. Although this could be viewed as extremely disappointing, the executive team of SAA Student Council bounced back to make this one of the most memorable weeks possible.

At the beginning of the week, the theme “Y2K” was announced, and students began to get excited about what was yet to come. Some students didn’t even understand what the theme meant, so a steady buzz of conversation could be heard drifting through the hallways as people wondered out loud between classes. Light purple t-shirts and sweatshirts were worn later that week on Thursday as students enjoyed a sweet treat of bundt cakes during lunch. But overall, students were most excited for Friday: the ultimate Y2K costume competition.

Kynder Lewis (‘22) was “watching soulja boy play among us on tiktok and it dawned on me that he was a big named person in Y2K.” She chose her costume because it was something that she could create and customize herself.

Although WinFo was very different, many students said that they were really happy with how it turned out.

“It was actually really fun, and I loved the bundt cakes. They were the highlight of the event for me, and even when we go back to regular, I think they should stay a tradition!” says Naza Aham-Neze (‘22).