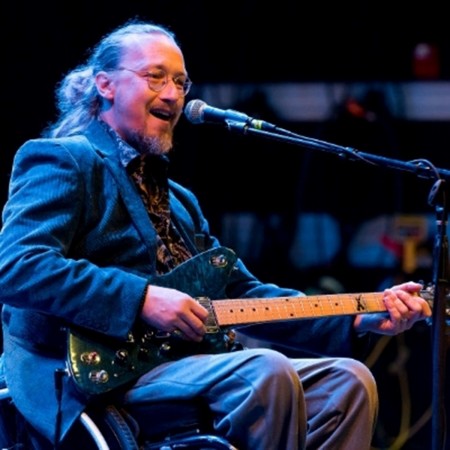 Emmanuel Gilligan will be performing on the closing night of ReelAbilities Film Festival, just like he has in year's past.

This week’s Name That Tune is brought to you by Emmanuel Gilligan, a freelance musician based in Houston. In 2014, Eman was left handicap after being shot during an armed robbery in Brazil. With his family, he moved back to Houston to receive treatment at TIRR Memorial Hermann after years of living and performing in Brazil. Through connections made at TIRR, Eman came on to the Houston music scene and found it to be dynamic and inclusive. Read on for excerpts from our interview with Eman. Watch his video to see if you can Name That Tune.

Where are you from originally?
My family is from Texas and around Houston. I have traveled a lot myself. My family has been back here in Texas since 2015, which is when we formed our band the Sundogs.

What brought you back to Houston?
I was living in Brazil, and I lived there for nearly 20 years. It’s a great place with wonderful people. I had a band there. I had a studio and was performing music all the time. And in 2014, I got caught in the middle of an attempted robbery. I was shot and almost killed by these robbers. So then, I needed advanced treatment and to live somewhere that made sense accessibility-wise. So that is why we moved from Brazil back to Houston. I wanted to keep playing music and found out there are lots of great places to do that. We were playing at House of Blues quite regularly and also all of the different clubs that have live music in Houston. And of course, ReelMusic has been an opportunity I’ve participated in for four years now!

Can you tell me about ReelAbilities Film Festival?
ReelAbilities is a yearly festival and celebration of art, film, and music with inclusivity – in other words, specifically people with disabilities. It also features movie about people with disabilities. Overall, it’s pretty upbeat. And usually, it ends with a night of music, which is where I have been participating. We perform at a really nice venue, White Oak, and there’s a great band to play backups. This will be the first year to go virtual.

How did you get involved with ReelAbilities?
This is my fourth year. I first got in contact with them because I had gone to TIRR, the center for people with brain and spinal injuries. People come from all over the world to get treated there. It’s one of the better hospitals for that in the country. I had done a little bit of therapy there. Everyone was nice. I thought as a musician maybe I could volunteer if they had a music department or any need for small shows. Come to find out they had a small music therapy department there, headed up by some great people. And through them I found out there were events and opportunities around the city for musicians who have disabilities. Anyways, at some point, I met Dee Dee. She is one of the organizers for ReelMusic, and she invited me to play there at White Oak. I found out it was a very fun atmosphere to play and listen to other musicians. I am going to miss it this year. But it’s still really great that we are having the event online.

Can you tell me more about your band the Sundogs?
There are four of us. My wife and I – we both play guitar. And my older son is the drummer and my younger son plays bass. And we all sing. We like to sing harmony together. Usually, we play cover songs. People love to hear them and sing along. We sing throwbacks like the Beatles and Rolling Stones. And then recent songs, we love to play too. We have a lot of original songs too. Our music would be in the rock genre. Recently, we have been incorporating more keyboard and synth sounds into our recordings. And we have a home studio, so that is where we record our music. I also get work playing jingles and recording songs.

What are some other places you love to play at?
Other places than the House of Blues would be Neon Moon and Jackie’s Brick House. We also love to play at weddings and special events. Those are always really fun because you get to be there for someone’s special day.

How will ReelAbilities Festival be different this year?
We hope to be back in person next year, but ReelAbilities will be completely virtual this year.

How have you seen ReelAbilities impact the community?
I’ve been impressed to see how many other singers and musicians there are in the disabled community. It is always nice to see them shine. It’s also a great time to network with other musicians and artists throughout the year. There’s nothing like meeting people in person and collaborating over music.

Editor's note: ReelAbilities Houston Film & Arts Festival promotes inclusion and celebrates the lives, stories and talents of people with disabilities, making an impact that lasts far beyond the Festival. The festival begins on February 16 and ends with a ReelMusic performance on February 24.