As the COVID-19 pandemic wreaks havoc on virtually every aspect of our lives, our nation’s gun violence crisis continues to be intensified.

February 1 through February 7 commemorates the third annual National Gun Violence Survivors Week – an initiative created with the intention of focusing on the experiences and elevating the voices of those affected by gun violence.

As we consider the correlation between the COVID-19 pandemic and gun violence in America, it is of utmost importance to take the time to listen to survivors. Gun violence leaves a lasting mark not only on the lives of those directly impacted, but also the community as a whole. Whether one has witnessed an act of gun violence, been wounded with a gun, or had someone they cared for wounded or killed with a gun, their life has been drastically altered.

Students Demand Action, a national organization created to harness the energy of youth in the fight against gun violence, has participated in amplifying survivor stories. At St. Agnes Academy, the Students Demand Action club orchestrated events on campus to raise awareness about the important week. The club broadcasted an informative video regarding the devastating impact of gun violence and handed out orange ribbons to stand in solidarity with survivors.

As the president of the Students Demand Action club, I feel that the role of young people in conversations surrounding gun violence is often overlooked or taken negligibly, despite the fact that youth face a significant impact of the crisis. We often struggle to grasp the toll of the crisis beyond statistics or what we see on the news. Through raising awareness on a school-level, we continue on a journey to advocate for the safety of our communities.

National Gun Violence Survivors Week represents an opportunity for students across the nation to reflect on those who have been taken or impacted by gun violence, in an effort to magnify their voices. Through turning pain and resentment into action, we can honor those lost to gun violence.

Caroline Stefan, a sophomore who contributed to planning the week expressed that “it meant a lot to [her] that girls were so receptive to our cause. Seeing so many people wear the orange ribbon was encouraging.”

The St. Agnes Academy Students Demand Action club pledges to continue to encourage productive dialogue and meaningful action in the next generation of leaders. 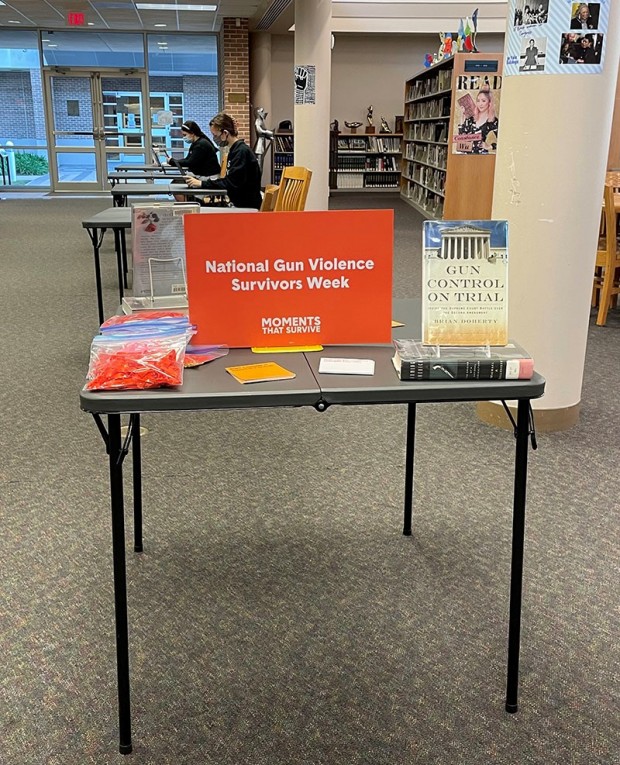 The St. Agnes Students Demand Action club set up a table with more information on gun violence in America.