Falcons are Resilient and Kind During Winter Storm Uri 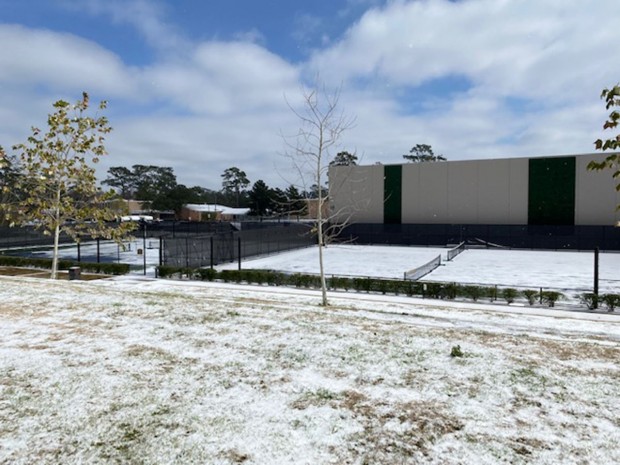 The Kinkaid campus was covered with snow over President’s Day Weekend due to Winter Storm Uri. (Photo by Jonathan Eades)

Yards turned white with snow and sleet over Valentine’s Day weekend, and Texans rejoiced, enjoying the cold weather. But this glimpse of a white winter overstayed its welcome and snowballed into a crisis impacting millions in the state.

At least 22 people died, hundreds of homes were destroyed, and millions lost power or water in areas where Winter Storm Uri struck, according to NBC News. The storm stretched from Ohio to Texas, with the latter being affected the hardest.

The Kinkaid community was greatly affected as well, causing school to be canceled throughout the week of Feb. 15. Rolling blackouts that at times, “felt more stationary than rolling,” as freshman Julia Nguyen said, plagued the city for days and into the weekend.

Many students and faculty lost water and some dealt with burst pipes in their homes. Kinkaid’s campus was open from Monday to Wednesday as a refuge for faculty members without power; then, the campus lost power on Wednesday.

The cold snap brought by an arctic freeze escalated to such a point that President Joe Biden’s administration declared a state of emergency in Texas, and major chains had to announce closures. ABC News reported that approximately 500 Walmarts, most of them in Texas, were closed, as were about 775 CVS stores.

The Weather Channel reported that snow covered 80% of the state of Texas on Feb. 15. This precipitation was followed by the coldest temperatures in decades for some cities. Many students had to deal with homes without heat and power in below-freezing temperatures.

“My power and water were out from Sunday night to Wednesday around noon, but the power fluctuated between on and off from Wednesday to Thursday,” freshman Ben Evans said. “It was pretty cold in the house for the first few days, but we had family members with power who let us stay a day or two. Overall, I am thankful because it could have been a lot worse.”

Food distribution sites like the Houston Food Bank saw thousands of people flocking to their doors for help to get through the storm. Many relief funds popped up, funded by local authorities or non-governmental organizations.

Some students saw this crisis as an opportunity to do good, including sophomore Canaan Estes.

“I kept seeing reports and news articles about people doing drastic, crazy things to stay warm, and I felt like I needed to do something to help,” Estes said. On his birthday, Feb. 16, he donated all the money he received to a local relief fund. “I realized that my experience could have been much, much worse. That's what motivated me to donate my birthday money to CrowdSource Rescue. I found out about CrowdSource Rescue from an Instagram post, and I looked into it.”

CrowdSource is an organization of civilians that step up to help their neighbors when a crisis like this comes along. The organization was started during Hurricane Harvey and uses advanced GPS technology to locate where someone needs help and direct a volunteer to go help them.

“I decided to choose this organization because I felt it would provide the most immediate help for people struggling around Houston,” Estes said. “The money will be used to provide these volunteers with the tools and supplies they need to help as many people as they can.”

Those who would like to help can donate to food banks across Texas and other nonprofit such as the Red Cross, Meals on Wheels, any Texas chapter of the SPCA, or to the Coalition for the Homeless of Houston/Harris County.

April Concerts at the Houston Symphony