In what lies nearest 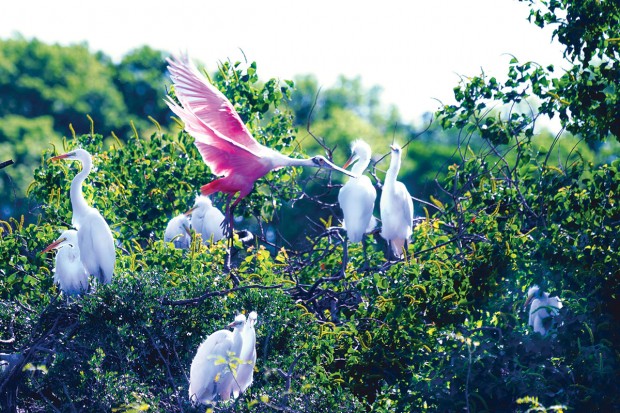 The Wizard of Oz never stops teaching. It took a bump on the head and a journey to Oz for Dorothy to realize there’s no place like home. It took a pandemic and canceled travel plans for Aimee McCrory to discover a paradise in Houston’s back yard.

This time last year, just as the lockdown started, Aimee’s sister, Heather Westendarp, an avid birdwatcher, along with her husband Bob, offered to show her “The Rookery” in High Island. “I was just looking for an excuse to get out of the house,” said Aimee. “I had no idea we would be entering a whole new world.”

After four years of photography classes, Aimee decided to turn her pandemic-imposed isolation into an opportunity to hone her technical and artistic skills. “I had just reached the big 7-0. I thought, time is ticking! I can’t miss this year.”

The Rookery is basically a bird-filled island that sits inside the Smith Oaks Bird Sanctuary, 177 acres of fields, woods, wetlands, and ponds. From a bird's eye view, the island looks like a long narrow smile in the middle of a body of water called Claybottom Pond. At the edge of the island are treetop-level viewing stands where human eyes can watch the story of spring unfold.

The arrival of the birds turns the island into one packed parent convention. Loud, gregarious herons, egrets, and roseate spoonbills talk and chatter, pick up sticks, primp, prune, and roost in trees. It’s one big reunion-party atmosphere after a long flight from areas of South and Central America.

“Why didn’t you tell me about this sooner?” Aimee protested to Heather in a sisterly exchange. “I’ve been telling you about this for years!” Heather shot back. Sometimes, limited options and curbed activity can improve our ability to hear.

From Houston, you just head down I-10 east and take the Winnie exit. It’s an hour and 15 minutes from downtown.

The spring action starts with nesting from late February into March. Then on to egg-laying and hatching, by mid-April. The plot thickens with chick feeding, flight training, and sibling rivalry.

What makes this haven so attractive to the birds is a lack of the usual predators. Normally animals like coyotes, raccoons, and possums would enjoy making a meal of these chicks, but the alligators patrolling in Claybottom Pond put a stop to that. Still, as the website warns the squeamish, an occasional chick on the ground does become an alligator snack.

It wasn’t until the mid 1990s, when Amoco Petroleum Company donated the vast majority of this acreage to the Houston Audubon Society and a hunting ban was declared, that the birds truly felt invited. Previously, locals, technically trespassers, frequented the site for target practice. Once the shooting stopped, word traveled quickly in both the bird and birdwatching world. A single bald cypress tree holding 25 birds at a time is now a common sight.

Before the pandemic, birdwatchers were coming to High Island from all 50 states and 20 different countries. “In the birdwatching world, High Island is better known than Houston,” said Richard Gibbons, Houston Audubon Society conservation director. But when it comes to Houstonians knowing about High Island, not so much. “Many Houstonians know more about the charismatic wildlife from the African Savannah than the incredible wildlife found right here on the Texas coast.”

Even if you have been to High Island and know exactly what we’re talking about, a new attraction awaits as of this spring, the Kathrine G. McGovern Canopy Walkway. It takes you through the treetops like a zip line might, but it’s a 900-foot boardwalk for feet, strollers, and wheelchairs, with elevations as high as 18 feet. The $2.3 million elevated walkway bends and curves through some of the best bird areas of the sanctuary, ending at the Rookery.

“This was becoming my oasis. I went there every few weeks. Then, in early May, I was shocked. The nests were empty, and the birds were gone,” said Aimee. “It was all over.”

Undeterred, Aimee went home, inspired by a new and deepening love and focus on her photography craft.

“I turned my house into a fantasy-land photography studio with fabric backdrops, fog machines, mannequins, mirrors, costumes, and masks.” Due to social distancing, Aimee is mostly the human subject. This year her work has appeared in online shows and photography publications, including, most recently, the New York City-based Humble Arts Foundation.

The Smith Oaks Bird Sanctuary is open 365 days dawn ’til dusk. Some birds, “the locals,” hang around all year, but the peak time is right now. The website says the best time of day is an hour before nightfall, as the birds come home to roost. For the best social distancing, weekdays and mornings are recommended. Don’t forget to bring your mask.

As for Aimee, she’ll be back this spring, in some ways a different person. “I’m not going to be on the go so much. My bags were always packed for the next trip. In many ways, this has been the best year of my life.”

Aimee says she has found comfort in the business-as-usual nature of, well, nature itself.  There’s always hope, as long as there’s always spring.