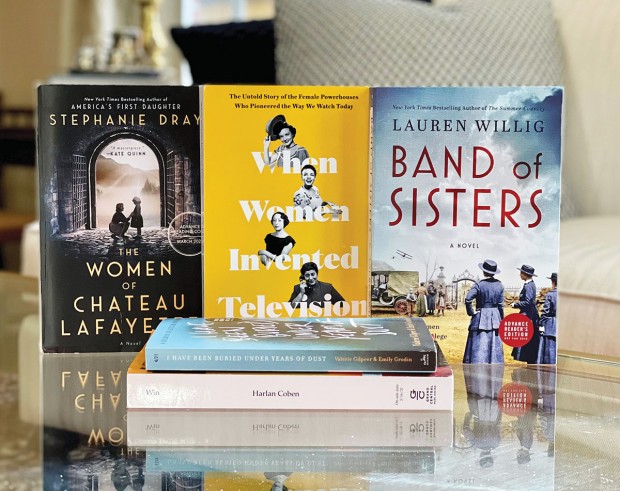 WHAT TO READ This month's picks include the start of a fabulous new mystery series, two nonfiction books, a tale based on Lafayette's chateau and its inhabitants, and a story about the Smith College Relief Unit in World War I.

Band of Sisters by Lauren Willig – During World War I, a group of women volunteers from Smith College traveled to France to help the country’s citizens whose lives and livelihoods were destroyed by the German invaders. The Smith College Relief Unit, including two female doctors, arrived in France ready to contribute aid, but found that, first, they had to overcome numerous obstacles, including dissension within their own group. Much of the historical-fiction novel is based on letters from the actual women who served in the Smith College Relief Unit, and Willig fills the book with fascinating facts about these Americans who headed to Europe as part of relief efforts, the work they did, and the role they played in the war.

When Women Invented Television: The Untold Story of the Female Powerhouses Who Pioneered the Way We Watch Today by Jennifer Keishin Armstrong – The arrival of television was ignored by many men in the entertainment industry who felt radio was the better platform. Four women, Irna Phillips, Betty White, Gertrude Berg, and Hazel Scott, individually used this opening to each forge their own path in the television industry and, as a result, significantly impacted the way we still watch the medium today. When television did in fact prevail, these women were pushed to the side as men began to dominate the industry. When Women Invented Television spotlights their forgotten stories and their significant contributions. I was captivated by their stories.

Win by Harlan Coben – Harlan Coben is known for his fabulous Myron Bolitar mystery series about a basketball star turned private detective. In Coben’s latest novel, the story centers around Myron’s sidekick Win, full name Windsor Horne Lockwood III, as he is drawn into a complicated but thoroughly engaging mystery from the past when the FBI recruits him to help solve a case. Combining missing Vermeer and Picasso paintings and a domestic-terrorism attack, Win kept me turning the pages as fast as I could, trying to figure out what would happen next. Win is the classic antihero who lives in an uberwealthy world (which Coben frequently details) and is not bound by any type of moral code, and his humor and wry personality drive the story. While a small portion of the ending is unrealistic, it does not ruin an otherwise stellar and highly entertaining mystery. I thoroughly enjoyed this one and read it in less than a day.