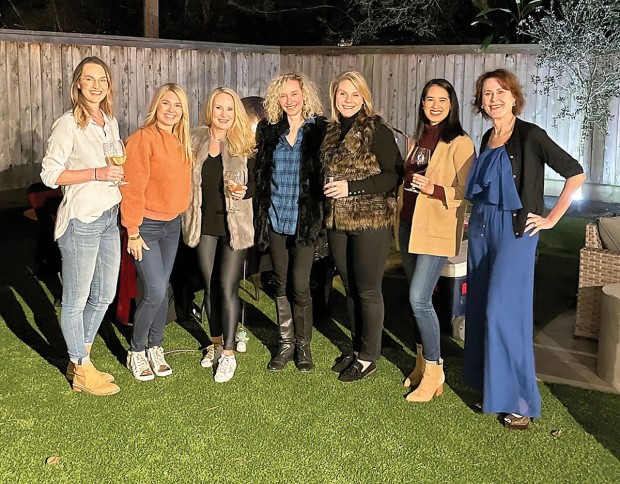 Two for 40. Not just one party but two were held for Lauren Rutherford, mom to Avery, Nicholas, and Elle, to celebrate the big 4-0. At the day party, her hubby Chris put 40 candles on a cake for the children to blow out. That evening, Angie Kinsel hosted the neighborhood gal pals, who were strangers before Covid but had children the same ages as Lauren’s. In her backyard, a Benihana hibachi dinner was a flaming success, with beautiful flowers for Lauren and Angie from Heather Nelson. Stylish Lauren wore her most comfy athleisure black metallic Zyia leggings (that she reps) dressed up with a faux fur vest. It was a great day in the neighborhood!

A special return to Belize. Since Paul and Amanda (Stark) Finnett have been going to the Victoria House Resort & Spa in Ambergris Caye, Belize, for years, they were glad to see most of the staff was still there. The resort chef cooked the fish the group caught, and on scuba dives they swam with large reef sharks, sting rays, and groupers. While they celebrated their anniversary with their sons, Benjamin Finnett and Kai Stark, and Ben’s friend, Zack Farnan, it was a special pilgrimage of fond memories of Toby Finnett, who learned to scuba dive there before his passing in 2018. A renewal and a closure that will never really end.

Run around the garden. It could not have been more perfect for Eva Luna Medina to celebrate her birthday at sunset. After all, her name is symbolic of eve and the moon. Full of life, Eva Luna celebrated her ninth birthday in a backyard garden party with twinkle lights overhead and a balloon arch of pink, purple, and blue balloons at the front door. Neighborhood friends, the Long Shadow Lonestars, enjoyed hot drinks and Crave cupcakes. Parents Marnie and Nick Medina and siblings Alexandra, Nicolás Jr., and JP (Juan Pablo) shared in the frivolity. 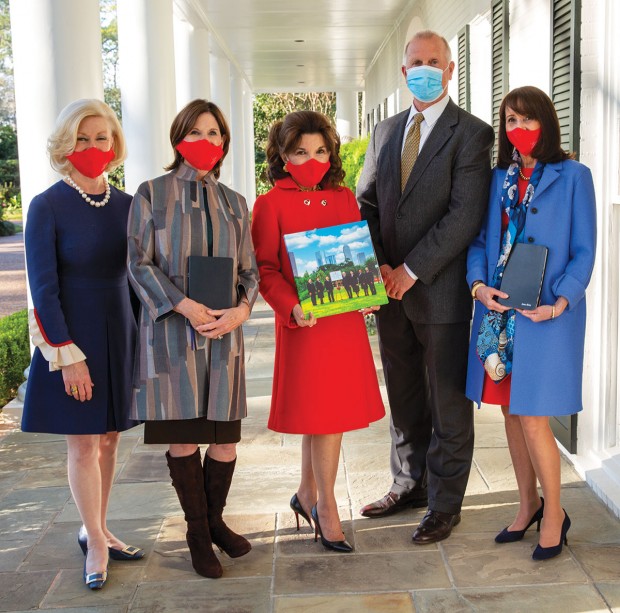 You did not have to go. There was not the usual annual, fashion-oriented luncheon. In fact, there was nothing at all except a tremendous letter-writing campaign. With foresight, letters stating need started many months before, culminating in over an astounding $1.8 million for the Salvation Army. A list of all the donors is in a beautiful commemorative book that also shows how the money was used. Tom Forney introduced Major Zack Bell, who presented it and an engraved silver tray to the stylish honoree, Linda McReynolds, in an intimate masked gathering with co-chairs Jenny Elkins and Judy Tate on Ann Bookout’s front porch. The applause was silent but heard through the deed of countless contributors.

The party was over. It started a year ago in March when Jay Files decided that the gathering of 12 squirrels eating ground food for the birds as well as monopolizing his bird feeder needed to feast elsewhere. Barbara, his wife, was tormented when the seemingly innocent creatures ate her favorite flower buds. Jay purchased a small Havahart trap and learned to put a towel over the cage to calm the furry ones when trapped. On one of their squirrel-relocation trips, they discovered the squirrel had pulled the towel into the cage, and when they pulled it out, the squirrel got the run of the car. After it terrorized the occupants, it discovered the snacks were outside and left. To date, 50 squirrels have been relocated. The Files are hoping a new feature in vehicles will be a squirrel extractor.

First one. Leila Harper Sawyer has had extra-attentive love since Covid struck the world, since her parents, Naseem and David Sawyer, were able to be home with her most of the time. She was surrounded by family for her first birthday, with a fanciful rainbow arch of balloons over the door. Local relatives and grandparents Fay and Mossy Alavi and Nancy and Jim Sawyer (in town from Longview) made a special wish with Leila for a healthy 2021 for all and, of course, safe play dates! And then food from El Tiempo was served.

Hot spots. Not every child has access to the internet to do virtual learning. Comcast has provided 10 Boys & Girls Clubs of Greater Houston and their headquarters with wifi-connected “Lift Zones” to enable lower-income students to fully participate in distance learning. In addition, BHP gave a gift of $500,000 to the clubs so essential services to the youth can be continued, said Selby Bush, head of BHP corporate affairs. Craig Lieberman, Sarah Morgan, Cynthia Sanford, Michael Terracina, and Glen Woo, who are involved with the clubs, were electrified about the generous gift and the robust wifi hotspots.