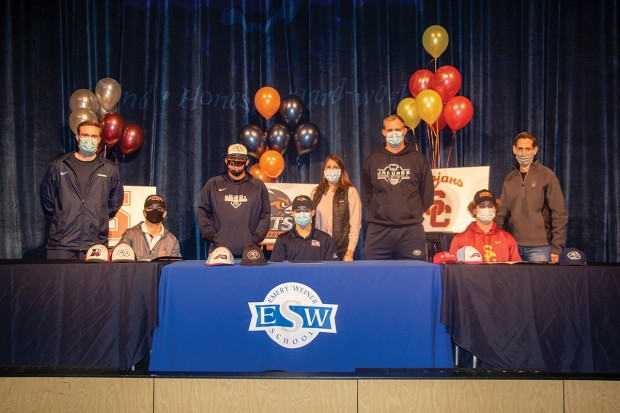 Even before the start of the baseball season, the Emery/Weiner School baseball program knocked it out of the park with a trio of its players signing to play major college baseball. In a special on-campus signing ceremony, seniors Josh Blum, Alex Mintz, and Max Roffwarg all made their collegiate choices official.

“It was a very special moment, not just for the boys and coaches, but also for the entire Emery staff and community to have these kids reach their goal to play college baseball,” said Jaguars baseball coach Dado Rodriguez. “To have three kids from one sport all sign together is a great achievement and a big deal for our school.”

A right-handed pitcher, Blum will play his college baseball for a USC Trojans program that boasts a dozen national championships. “Josh is one of the hardest workers I’ve seen the last several seasons. His work ethic was instrumental in getting him to this point,” said Rodriguez.

Mintz, who plays outfield for the Jaguars, will play collegiately at UTSA, while Roffwarg signed with Swarthmore College in Pennsylvania.

“Alex is one of those kids that sleeps and dreams baseball. He works at it seven days a week and is the first and last off the field,” said Rodriguez.

As for Roffwarg, Rodriguez affectionately refers to his shortstop as ‘dirtbag.’ “That’s actually a big compliment in baseball. He gets out there and gets dirty and does whatever it takes to win. Max is an underdog type of player who always gives 100 percent. His attitude and effort are exceptional.”

While the trio have promising careers ahead of them at the next level, first things first, as all three return for one more season of high school baseball. “It’s definitely a blessing to have them back,” said Rodriguez. “Our season was abruptly ended early last season due to Covid-19, so there’s extra anticipation for this coming season. We have big goals, and those three guys are going to be a big part of what we accomplish.”

The football season may be long over with, but there were still honors for the area’s best players and coaches at the Hildebrand Foundation Private High School Awards Dinner. 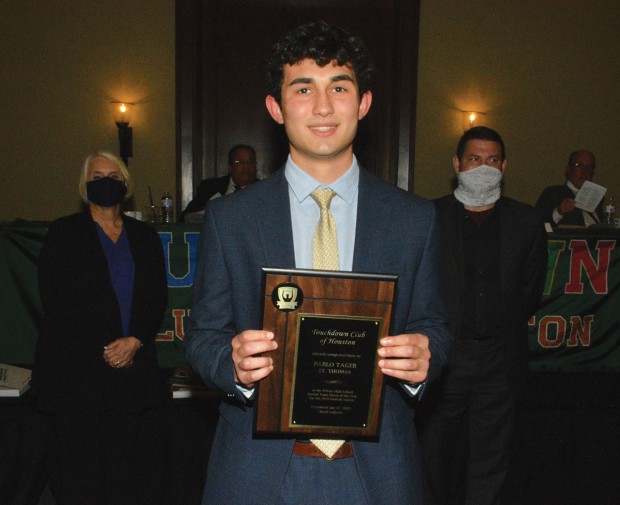 The St. Thomas Eagles were especially well represented, with Rich McGuire winning the Coach of the Year award, Pablo Tager named the Special Teams Player of the Year, and quarterback Maddox Kopp receiving the Offensive Player of the Year award. “We had a phenomenal season as a team. I had a blast playing all season with the guys, and just to be here and be recognized is a great feeling,” said Kopp, who’ll be playing next season for the University of Houston. “Plus, several of my teammates are here as Player of the Year finalists, so that just shows the strength of our entire team.”

Meanwhile, the Defensive Player of the Year award was won by Kinkaid Falcons defensive end Ezekiel Evans. “It’s an honor,” said Evans. “There’s so much great talent across Houston, and to be included with these guys just goes to show the kind of work me and my teammates put forth through this entire season. The brotherhood and culture at Kinkaid have been something special. As a senior, I will always value the love that my coaches and teammates have showed me the last four years. We always preach family and upholding the standards at Kinkaid, and it’s really made me who I am today.” 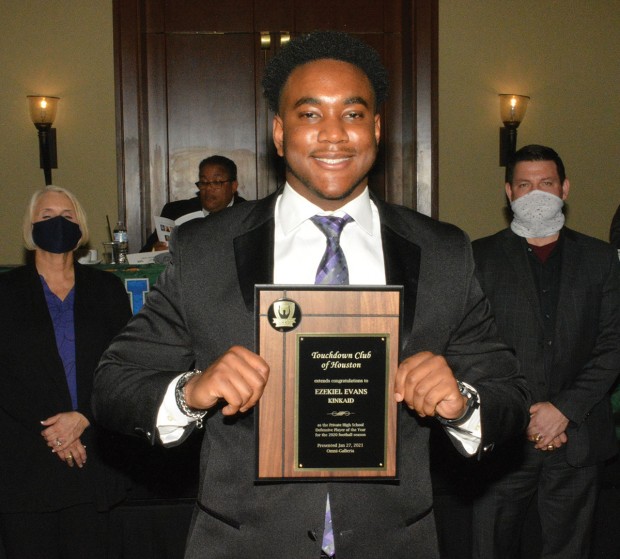 HONORED It was a big night for Kinkaid Falcons senior Ezekiel Evans, who was named the Defensive Player of the Year at the Hildebrand Foundation Private High School awards dinner.

The Lineman of the Year Award went to Episcopal Knights senior Donovan Jackson, who is rated as the nation’s top offensive line prospect. “All of the guys at this event are fantastic football players, so it’s a big honor to be among them,” said Jackson, who’ll next play his collegiate football at Ohio State. “I owe so much to Episcopal High School sports and what it’s done for me both on and off the field. Episcopal has been one of the top private schools in Houston for quite some time now, and it consistently just draws in great players and great people, so we constantly compete every day.”

Another major award winner on the night was Second Baptist Eagle Bryce Ganious, who was named the Ironman of the Year. The Ironman award was presented to the best two-way player, with Ganious being a force both on the offensive and defensive line for the Eagles. The senior standout will play his college football at Villanova.