Now lick your lips and smile 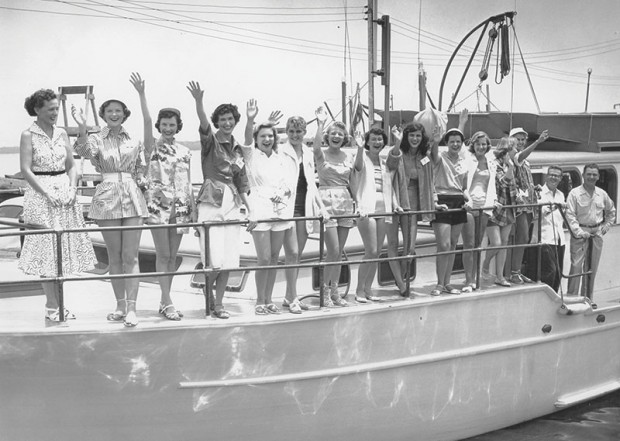 There are many good things about getting older. One is that when you look back, you can really see how much the world has changed, and, dare I say, improved overall.

As a little girl, I would spend hours looking through old scrapbooks of my mother’s glamorous life. She was a celebrated Southern beauty, in Biloxi, Mississippi, as the 1953 winner of the Miss Hospitality Contest, the local beauty pageant for the two adjacent Gulf Coast towns, Biloxi and Gulfport, the anchor towns of Mississippi’s 26 miles of beach.

My future mom, Sandra Lee, was pictured in car-dealership ads, at ribbon cuttings, and in party dresses with other Southern debutantes in the waving and waterskiing era of the Mississippi Gulf Coast. In less than two years, I would come along and bring it all to an abrupt halt.

I didn’t see these photos in the context of the 50s. It never occurred to me that there were no black people on the beach where I spent my summers. In 1960, about 125 black Mississippians staged a peaceful wade-in. It turned into a violent clash led by a white mob that would come to be called “Bloody Sunday.” The Mississippi beaches remained “whites only” until 1968.

My mother, in addition to her brief fling as a Southern belle, was a smart, curious lady. She met my father in journalism school at Mississippi Southern College in Hattiesburg, Mississippi. He, two years older, was the editor of the school newspaper, Student Printz.

As the story goes, my grandmother encouraged the beauty-queen side of my mother. When she and Mom toured the campus of Mississippi Southern College, an upperclassman was assigned to show them around, including a stop at the newspaper. There they met the handsome, 6-foot-tall editor with the weird name, Clymer Wright. My grandmother had the chutzpah to send the official tour guide on his way, saying my dad would now finish showing my mother around.

Pictures of Mom and Dad smiling at sorority and fraternity functions dressed like people from central casting for a 1950s movie belied my mom’s indifference to such things. She dropped out of her “boring” sorority.

When my father graduated from college, it never occurred to Mom to finish and graduate herself. I, for one, would not be here if she had. To quote my grandfather, “She got her M.R.S.”

But something slightly progressive was also going on in that household. My feisty, bossy “Mimmie,” Leola Lee, was a career woman, the head “secretary” for the hospital at Keesler Air Force Base. In reality, it was a key administrative job, as evidenced by the six “Secretary of the Year” plaques and newspaper clippings.

My grandfather, “Lee,” said his friends warned him about the dangers of letting a woman make her own money. “It would have been a lot more dangerous trying to keep her from it,” he said with a wry wink and a twist of his cigar. Lee’s best lines started with a dry cigar rolling in his mouth, signaling the quip that was about to roll off his tongue. To my dad, he said, “I knew you wuz going to marry Sandra before you did. I heard her and her mother plannin’ it.”

My parents were married in the First Baptist Church, February 12, 1953. I was born November 14, 1954, nine months and 2 days past their wedding date, a timespan my grandmother sweated out.

By then, my dad was serving in Korea. He learned about me in a letter “from me” cleverly penned by Mimmie.

I now wonder if Dad knew anything about a Korean War paratrooper from Hattiesburg named Clyde Kennard, a black soldier who also served in WWII. He was three years into his college degree from the University of Chicago when Korea called.

Upon his return, he went back to Hattiesburg to take care of his mother after the death of his father. He applied to Mississippi Southern College to finish his degree in 1955, 1958, and 1959. After his third denial, he wrote a letter to the local newspaper, which prompted his arrest. In 1960, he was framed for the heist of $25 worth of chicken feed and sentenced by an all-white jury to seven years in the notorious high-security state penitentiary Parchman Farm. Kennard would die of cancer on July 4, 1963.

I wish I could talk to my mother and father about those times, in these times, about the “good ole days” when all-white beaches weren’t just about the sand.