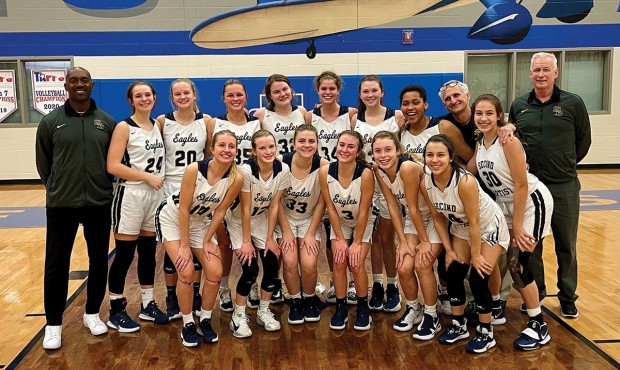 FLY LIKE AN EAGLE It was another tremendous season for the Second Baptist Eagles girls basketball team, which came within one victory of a state championship for a second straight season.

For the second straight year, the Second Baptist Eagles girls basketball team came within one win of a state championship, losing to Southwest Christian of Fort Worth in the TAPPS 5A state final. But even to make the state finals again was quite an achievement for an extremely young Second Baptist lineup loaded with sophomores and even a starting freshman point guard.

“Both of those state final defeats were to Southwest Christian. They’re a powerhouse team with several players who will play on to the collegiate level. We just weren’t quite able to bridge that sort of athletic gap,” said Eagles head coach John Herndon.

Sophomore guard and first-team all-state player Kate Marshall led the team in scoring and rebounds with 15 points and 10 rebounds a game. “Kate was the heartbeat of the team both on offense and defense. But where there is a heart you got to have a brain, and I would say that role belonged to our freshman point guard Olivia Sauvageau. Olivia is extremely savvy on the court. She’s a great passer who also loves to score.”

Another key contributor was sophomore guard Ella Ryan, who also happens to be the granddaughter of baseball legend Nolan Ryan. “The apple doesn’t fall far from the tree,” said Herndon. “Ella is extremely competitive.” Herndon also had high praise for senior all-state player Leyla Ertan, who averaged 11 points a game, as well as sophomore Olivia Walker. “Olivia loves the game on both ends of the court. She provides a great example of hard work for other girls to admire and copy.” 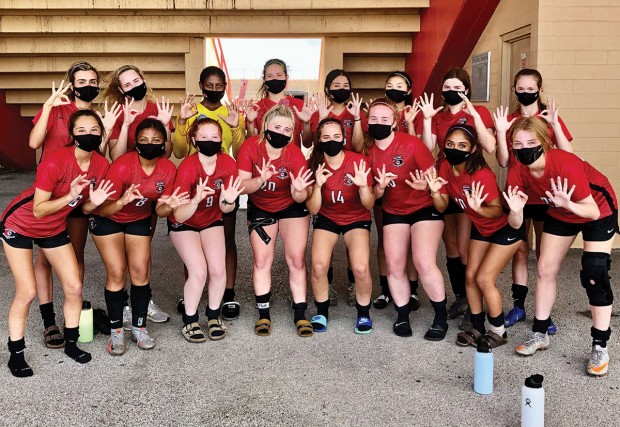 EIGHT IS GREAT The Bellaire Cardinals girls soccer team displays the number 8 to signify eight straight district championships for the program. The Cardinals went 12-0 to win this year’s district’s title.

The Bellaire Cardinals girls soccer team won its eighth consecutive district championship, having gone undefeated in district with a 12-0 record. The Cardinals were 17-2-1 for the season while ranking as high as No. 7  in the state by the Texas Girls Coaches Association.

“We made significant strides as a program this year,” said Cardinals girls soccer coach Alan Thompson. “Climbing up to a top 10 state ranking at one point in the season shows that we’re in the mix as one of the top teams around. We’ve worked really hard to earn that recognition.”

The Cardinals earned it behind the play of several girls, including leading scorer Anneliese Switzer. The Cardinals sophomore scored 18 goals on the season while scoring 47 points. In addition, senior Cate Plagens, who was the team’s starting goalkeeper the previous three seasons, was second in scoring, with 16 goals and 46 points. Defensively, senior goalkeeper Erin Williams held opponents to .058 goals-against average, and sophomore Hadley Wormser was a defensive force while playing every second of every game.

“We’re losing some really good seniors, who leave our program as the most successful class in our program’s history,” said Thompson. “Our younger players will have some big shoes to fill, but I’m confident they will work hard to continue to push our program forward. 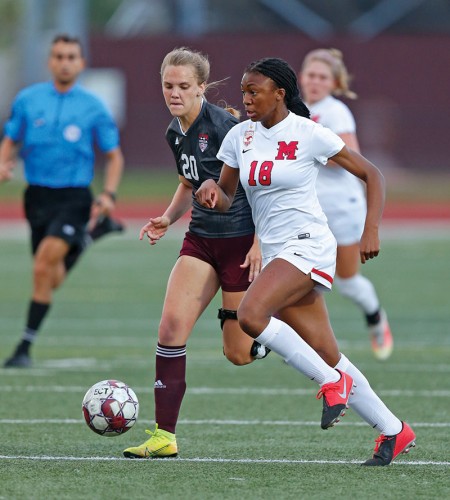 As the Memorial Mustangs girls’ soccer team advanced deep into the playoffs, they defeated none other than the rival Stratford Spartans in the third round of the postseason. “It was the first time we’ve faced Stratford in the playoffs, so it was definitely a special atmosphere,” said Mustangs head coach Lindley Amarantos. “We knew the community would show up in big numbers, and we were thrilled to pull out the victory.”

The Mustangs pulled out the 5-1 win behind a sensational night from sophomore Adelhia Ghonda, who scored three goals in the 6A Region III quarterfinal victory, marking the third hat trick for Ghonda in three playoff wins. The victory also raised the Mustangs’ record to a lofty 20-3-2, as the 2018 state champions put forth another deep playoff run.

“We’re a talented team that really started to peak at the right time,” said Amarantos. “Plus, not having the playoffs last year because of the Covid-19 pandemic left us with some unfinished business to take care of this season.”