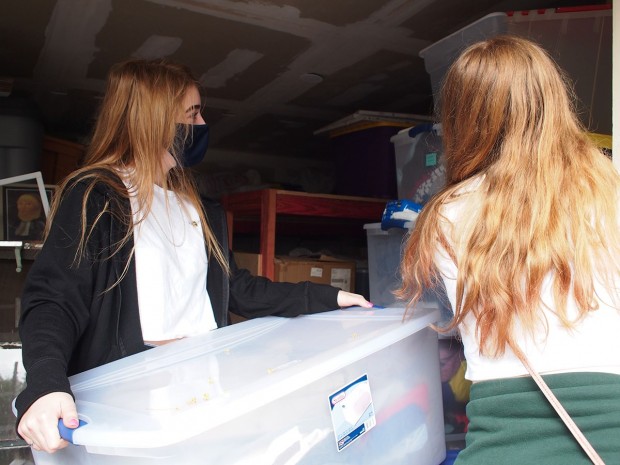 In an effort to maintain individual privacy, all students mentioned in this article have been given pseudonyms.

In the heart of St. Agnes Academy, an all-girls Catholic school, there lies an unexpected and thriving community: the Kaleidoscope Club. The Kaleidoscope Club is comprised of members of the St. Agnes community who identify as LGBTQ+ and their allies. Despite existing in an environment typically challenging for underrepresented gay youths, the Kaleidoscope Club has, through the hard work and progressive visions of passionate students and open-minded faculty members, made great strides in not only strengthening and increasing accessibility of the LGBTQ+ community at St. Agnes and providing support to students in need, but widening their vision of positive change. Beyond their school community, Kaleidoscope club members assist many homeless LGBTQ+ youths throughout the Houston area and educate the uninformed about hardships and what they can do to help their fellows. They constantly strive to advocate for acceptance and care for those that have been judged and punished for too long.

First and foremost, Kaleidoscope Club welcomes all with open arms. In the wake of its founding, many students who previously felt isolated and misunderstood found a group of people that they can empathize and grow with.

"My favorite part of being in this group is finding similar interests with the people I talk to," says Rye, a member of the club. "It's incredibly validating to be able to talk about similarities while still feeling comfortable enough with each to get to know our differences."

That’s the heart of what Kaleidoscope Club is about: creating a safe environment for students to understand themselves and their peers better without fear. Rye continues by saying: “Getting to know people who have gone through similar experiences as I have is such a nice feeling. It's also given me the chance to feel more comfortable expressing myself, my opinions, and my identity.”

With a community of people accepting them and an audience their opinions resonate with, club members are given an opportunity to bloom. Valentine, club historian, says: “Kaleidoscope club has helped me come out of my shell and be more comfortable with myself. There are so many inspiring people in this community who have helped me to accept myself for who I really am and who have encouraged me to be confident in whatever I do.” This group spreads an unending message of self-love and acceptance that positively impacts its members constantly, but they don’t stop there.

In the Montrose area of Houston, there is Grace Place, a homeless shelter for youths from 13 to 24 of every sexual orientation and gender identity. They are provided with a family style meal, an enriching activity, and are given access to a free store of donated necessities such as clothing and toiletries. This assistance and care gives these young people the opportunity to get back on their feet and find hope without judgement.

Kaleidoscope Club members regularly invest time and effort into volunteering at Grace Place. Cassandra, Vice President of Kaleidoscope club, is adamant about how this service has strengthened the club as a whole, saying: “Our work with the Montrose Grace Place has been some of my favorite volunteer work I’ve ever done. I was surrounded by club members who were extremely dedicated to the volunteer work, and the leaders of the organization fostered a very fun and comfortable environment.”

Beyond bettering the individuals in the club, this commitment to service also betters the world around them. They do not just want to invest in their own community. They wish to stretch their outreach to their even more unfortunate fellows throughout the Houston area.

Beyond their community of like-minded individuals, Kaleidoscope Club does not shy away from expressing its opinions and importance beyond itself, all while adhering to St. Agnes’ Dominican ideals. They started with expanding their own minds and knowledge with immersive discussions on difficult topics, such as a Transgender Day of Remembrance and a mental health meeting.

During these discussions, they highlight not just the hardships that members of their community undergo, but also the surrounding circumstances that worsen these issues.

"We focus a lot on uplifting marginalized communities by showing intersectionality in the LGBTQ+ community and highlighting that the LGBTQ+ community is extremely diverse," says Cassandra, emphatic about the club's focus on education. "Our goal of education and awareness means representing the community in a way that pushes past the two-dimensional stereotypes of what is traditionally considered LGBTQ+. There’s so much more history, culture, and depth that we seek to research and share with those around us.”

That’s what it’s all about: redefining what they think they know to better understand the world as a whole. They recognize how these difficulties do not just affect nameless faces, but members of our own community, in order to form a safety net and support system for any club members that are struggling.

After they gained a deeper understanding of the complex issues they face, they were wise enough to share this knowledge with others. As best said by Austin, the President of Kaleidoscope Club: "Exceptional progress is made when students like us, with a common passion, unite and encourage one another to never stop fighting for the brighter, more loving future that we hope to build together.” Following this bold mission, the club recently banded together and devoted the effort into hosting a school-wide Transgender Visibility Meeting featuring the compassionate theology teacher Dr. Derby.

Their choice to invite a theology teacher to an LGBTQ+ meeting may seem perplexing, but club leaders regularly research Catholic catechism and teaching to find ways to build bridges between the traditional Catholic mindset and the modern era. While the club openly discussed systems of oppression that affect the transgender community and how to be an ally, Dr. Derby served as a guest speaker and walked the audience through the intersection between Catholicism and transgender identities. Their goal was to enlighten their peers to the convoluted obstacles they face so that the student populace could rally together, assisting in the name of St. Agnes’ mission: social justice.

After an interview with Sister Jane, the head of St. Agnes, and Mr. Heatwole, a theology teacher and sponsor of the Kaleidoscope Club, that led to an illuminating discussion into the nature of acceptance and duty to others, the St. Agnes Academy Statement on the Kaleidoscope Club was created: “The Kaleidoscope Club exists at St. Agnes Academy because part of our mission is to form students to work for social justice and act with compassion. The LGBTQ+ community often experiences misunderstanding, discrimination, and violence and the Kaleidoscope Club is intended to be a ‘safe space’ for these students. If we are to have compassion for all of God’s creation and honor a person’s dignity, no matter their identity, then we must ally with our LGBTQ+ students. We teach the Church’s position on sexuality – to grapple with its complexities – and we support the well-being of all our students. The Gospel speaks to the truth that all people are created equal and we support them in whatever way we can. Each person is a child of God and will be met with the support we are able to provide.”

This statement goes to prove that St. Agnes embraces not just its Catholic identity, but also its Dominican one. Since St. Agnes’ founding in 1905 by Mother Pauline Gannon, Prioress of the Dominican Sisters of Houston, St. Agnes Academy has made its mission to instill in its students a need to embrace diversity, champion the marginalized in society, and have a deep commitment to social justice and making a difference in the world.

LGBTQ+ youth are a targeted group that is at risk by pure nature of being who they are. Social justice requires us all to act with compassion for our fellow person and to lift each other up to an equal level solely because of our common nature of humanity.

If a group of St. Agnes students were not only at risk, but also felt isolated, misunderstood, and discriminated against, how could this foundation rooted in love of all and care for its students above all else allow this issue to go untended? The environment they have found themselves in requires that all members of St. Agnes must be given care and acceptance because they are all children of God, no matter what their sexual orientation or identity may be.

Although the circumstances may be difficult, St. Agnes is driven by its high morals to ensure that above every other consideration is the safety and wellbeing of their beloved students, and they point to repeated Scripture verses preaching love of neighbor and acceptance of all in the image and likeness of God to do so. Kaleidoscope Club exists not in spite of being at a Catholic school, but because of it.