What to listen to this summer 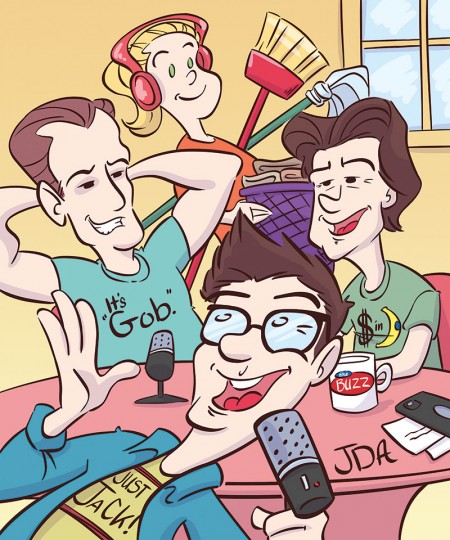 LISTEN UP This summer, while you're working around the house, walking, or traveling, try listening to a podcast like SmartLess, which is essentially a "kitchen table" conversation between actors Will Arnett, Sean Hayes, and Jason Bateman. (Illustration: behance.net/runamokstudios)

Our annual “Back Porch” summer-reading guide is veering into another lane, just for this year. This year, we’ve asked people what they are listening to – books, podcast series, podcast shows. Audible, Spotify, and Apple Podcasts are teeming with content. Our challenge is sifting through it all and making time to listen.

Michelle Frankfort, an event planner at the Jewish Community Center and mom of two, has figured it out. “It’s what I do when I’m walking my dogs or running around the house,” she says. “I’ll put in my AirPods and escape some of the realities of the news and social media. I can’t read or watch TV and walk my dogs, obviously, but with podcasts I can multitask.”

Michelle is a new listener; during the early days of the quarantine, she stopped listening to or reading the news. “It was too depressing,” she says. “So I started going on these long walks because there was nothing else to do and listening on demand to some of my favorite NPR game shows, Wait Wait...Don’t Tell Me! and Ask Me Another. I never even knew NPR had podcasts. I’m a little late to the podcast game, but here I am. Is this what old people felt like when they used to listen to radio shows?”

“It just makes me laugh. You’re listening to these three friends talking to a guest, sort of like you’re sitting at a table with a group of people having a casual conversation. There’s an unscripted ease about their friendship. It’s funny, honest, relatable. And they started the podcast in quarantine, as a way to get together.

“I like it because it’s not like a series where you have to know what’s going on. You don’t have to go in order.” We’re told the Will Ferrell episode is a great place to start.

Tracey Blumrosen, a social worker at Baylor and Texas Children’s Hospital, says she had trouble getting hooked on podcasts. “Not my thing,” she says. But getting absorbed in a good story is her thing.

She says Born a Crime, by the South African comedian and host of The Daily Show Trevor Noah, “is the best book I’ve ever read [or listened to]. I thought maybe it was because I was from South Africa, but everyone who I’ve talked to feels the same way. He’s the narrator, and it’s all about his life, funny, sad, interesting, everything you want a book to be. It’s got all the emotions.”

The Washington Post said, “The author’s gift for vocal impersonation elevates the audio version [of the book] into something even more splendid than an already terrific memoir.” Trevor won the Audie Award for Best Male Narrator in 2018.

“I love it when the person narrates their own audio,” Tracey adds. “David Sedaris is wonderful. He’s so real, and he talks about things all of us experience – family, growing up. His sense of humor is just wonderful.” Tracey suggests starting with Me Talk Pretty One Day.

On the more serious side, one reader recommends the podcast I’m Not a Monster. “If you were a fan of the TV series Homeland, this will remind you of it,” she says. A collaboration between PBS and the BBC, I’m Not a Monster is a 10-part series that follows journalist Josh Baker through a four-year investigation into how a mother from Indiana wound up married to an ISIS sniper, living in Syria, and ultimately sentenced to jail in the States.

The Orange Tree is the first podcast series produced by The Drag, a student-run production company at The University of Texas Moody College of Communications, and it ranked in the top 20 for every category in Apple Podcasts. The seven-part documentary investigates the 2005 murder of a 21-year-old girl at the Orange Tree condos just off the UT campus. “Two top UT students were convicted, and three families’ lives were changed forever,” the synopsis says.

“If you went to UT, you will especially [be interested in] this one,” says attorney and UT graduate Dionne Miller.

Michelle Frankfort is still getting used to the idea of listening instead of reading. “I do read books. I can read,” she says. “But truthfully, I sometimes think books can be work.” And by the time this summer rolls around, we all are going to appreciate whatever is easy.

10:30 am to 1:00 pm
Location:
The Brookwood Gift & Garden Center
END_OF_DOCUMENT_TOKEN_TO_BE_REPLACED