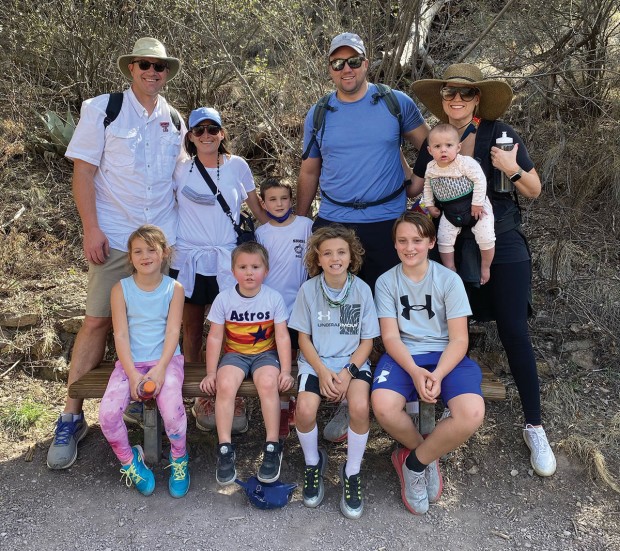 A long road trip with small children? No problem, we think. It’ll be an adventure.

Planning parents will shrug off the reality of strapping tiny humans into car seats where they cannot get their wiggles out. Instead, they think, with unlimited snacks and a charged-up iPad, time will fly. And it sounds less tedious and complicated than long airport lines.

As some Buzz parents can attest, this happy vision can come true. But, they say, expect everything to take longer, potty breaks to be more frequent, and to hear, “Are we there yet?” on repeat.

The McKnight families vowed to turn a possibly daunting, long journey into a fun, memorable, and educational experience for their kiddos. Brothers Jeremy and Kyle McKnight, along with spouses Amelia and Lindsey, and the families’ combined six kids, ages 6 months up to 9, needed to get from Houston to Las Vegas for their grandmother’s 90th birthday, so they devised a plan: Rent two RVs, meet up at the Buc-ee’s on I-10 after school on the Friday of Spring Break, and hit the open road.

Kyle and Jeremy drove, and it took some time for them to get used to driving the big rigs (rented from Cruise America), and for the kids to ride in them. On the first day, they drove only about four hours with a stop in Kerrville.

Kyle’s wife, Lindsey, an attorney, says road trips were not a part of her childhood. “My family used to fly to Dallas,” she said, laughing. “We researched doing something last summer, but no one was flying because of Covid. We never got organized. This idea was lingering.”

The RV trip would last five days. They packed tons of snacks for the kids. “Kids are just hungrier on the road,” Lindsey said. The cousins switched back and forth between the RVs. Along the way, they made stops at Big Bend National Park, Marfa, White Sands National Park in New Mexico, and  then Tucson before finally reaching their destination of Las Vegas.

They spent each night at RV parks in various rural areas along the way. “There is a road tripping app we used,” called Roadtrippers, said Lindsey. “If you put your route in, you can zoom in and see the parks along the way.” 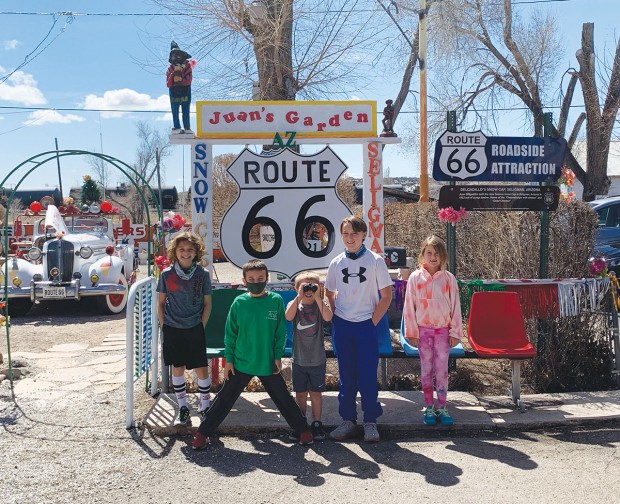 In Seligman, Arizona, on Route 66 are (from left) Jamison, Finley, Harrison, Kingston, and Blaire McKnight.

Lindsey says the smallest road tripper of the bunch, E, now 7 months old, was surprisingly rather easy to entertain in the RV. They had been most worried about keeping her entertained. The real struggle, however, turned out to be 4-year-old Harrison, who was at a busier age.

They played a lot of movies in the RVs and switched around spots. They laughed, like when it took an entire 30 minutes to fill up the gas tank. They had spontaneous stops, like for root beer floats along Route 66.

Lindsey and Kyle had taken a long road trip before in their SUV. Back in June 2016, they were unexpectedly forced to move out of their home for mold remediation. Kyle, a native of Lubbock, attended Texas Tech University and has been a lifelong fan. Texas Tech had just made it to its first-ever College World Series in Omaha. Kyle, on a whim, suggested to Lindsey that they pack up their then 4- and 7-year-old sons and drive the 15 hours to Omaha to see them play. They left the following morning. Lindsey says the road trip was worth the challenges and restless hours in the car with memories they still talk about.

The birthday trip to Vegas was a success. Amelia did opt to fly back with their three youngest kids from Vegas to Houston, but the rest of the crew took a shortened version of the road trip on the return and got back to Houston in just two days.

Another Buzz parent, Lindsay Whelan, takes road trips each year to Florida with her family. She says she and her husband learned the hard way to reconsider waking the kids up at the crack of dawn in the hopes they would fall back to sleep in their car seats.

“They would never go back to sleep after and ended up causing trouble before we even got a full sunrise,” she said, laughing. “They were miserable when we would get to our destination and then would fall asleep.”

If you get a few travel tips and can put up with crumbs between seats, a road trip with kids could be the perfect summer adventure.