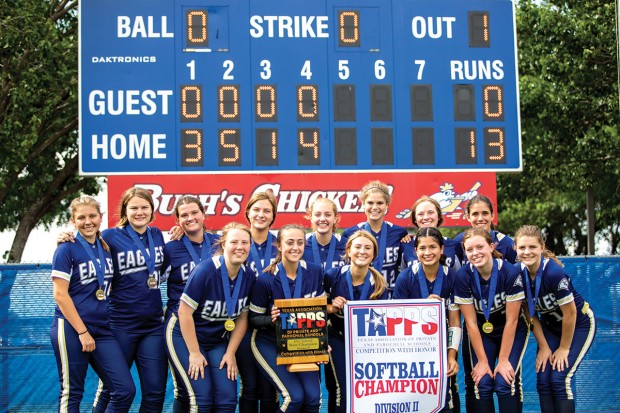 HISTORIC CHAMPIONSHIP The Second Baptist Eagles made school history by winning their first-ever state championship in softball. The Eagles secured the TAPPS Division 2 state championships with a decisive 13-0 victory over Grapevine Faith Academy in the state-title game.

For the first time in school history, the Second Baptist Eagles are state softball champions. The Eagles captured the TAPPS Division 2 state championship with a decisive 13-0 victory over Grapevine Faith Christian in the state title game.

“Our girls kind of flew under the radar for much of the season, but we peaked at the right time,” said Eagles softball coach Brandy Mardis. In the playoffs, the Eagles defeated St. John Paul II 4-0, Lutheran South Academy 10-0, and Fort Bend Christian Academy 5-3, and capped it all off with the decisive victory over Grapevine Faith.

Senior pitcher Rachel Riley starred both on the pitching mound and at the plate all season for the Eagles with a .530 batting average and a 15-5 record on the mound. Riley was also a perfect 5-0 in the playoffs, including a two-hit shutout victory in the state final. Riley and standout hitter Leyla Ertan (.458 average) were the only two seniors on the Eagles’ roster.

“The season was special to us for a lot of reasons,” said Mardis. “The girls battled through some tough years and a lot of adversity. For them to have their moment and see all their hard work and dedication pay off is truly rewarding.” 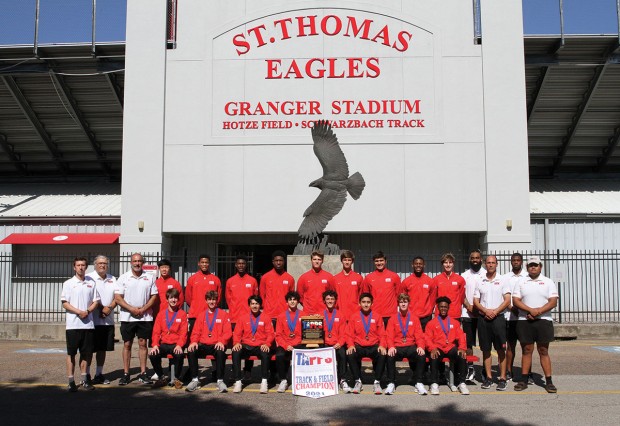 ON THE FAST TRACK The St. Thomas Eagles won this year’s TAPPS 6A boys state track and field championship. The victory marked the Eagles’ third state championship in the last five seasons.

The St. Thomas Eagles are the TAPPS 6A boys state track and field champions for the third time in the last five years. The Eagles captured this year’s state title by a hefty 31-point margin over second-place Trinity Christian.

“Our motivational motto all season was finish with purpose,” said Eagles head track and field coach Nathan Labus. “Qualifying for state wasn’t going to be good enough. We had a great group of leaders on this team who were intent on winning the state championship.”

One of those leaders was senior standout Cameron Bonner, who won a pair of gold medals, including a state-record victory of 47.98 seconds in the 400-meter dash. In addition, Bonner teamed with Joseph Romero, Heriberto Villegas, and Luke Anigbogu to win the 4x400 meter relay. If that weren’t enough, Bonner ran on the Eagles’ second-place 4x100 meter relay team.

Even before hitting the fast track, the Eagles set the tone for the state title by dominating the field events on Day 1 of the meet. Junior Andre Meza finished first in the high jump, while freshman Marquis Kiatta was second in the triple jump and third in the long jump.

“We loaded up with 49 points in the field events, which put us in a great position to win the title,” said Labus. “All of our guys really performed at their best, and the exciting thing is, out of our 18 competitors, only three are seniors. So, we’re definitely excited for next year.” 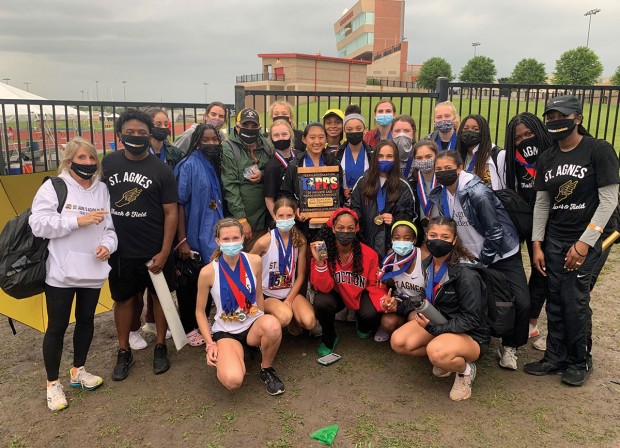 The St. Agnes Academy Tigers dominated the field to capture their fifth consecutive TAPPS 6A girls state track and field championship, winning the meet by an amazing 92-point margin. “It was definitely our biggest margin of victory to win a state title,” said Tigers track and field coach Kristi Robbins. The Tigers were so dominant that the team racked up first-place finishes in nine of their 16 events.

Tigers junior Leah Klenke put forth an especially spectacular meet by winning gold in three distance races, including the 800 meter, the 1,600 meter, and the 3,200 meter. While becoming the first St. Agnes runner ever to win all three of those distance races, Klenke also set a TAPPS state-record time in the 1,600-meter victory. “She’s definitely a special athlete,” said Robbins.

Junior Allie Scott was another multiple gold-medal winner for the Tigers, with victories in the 100-meter hurdles and the 300-meter hurdles. In the field events, Faith Mitchell set a state record while winning the shot put and also captured gold in the discus throw. In addition, senior Crystel Ozigboh won the triple jump, and fellow senior Mimi McHugh captured gold in the pole vault.

“Our girls simply went above and beyond,” said Robbins. “We were an especially well-rounded team.”