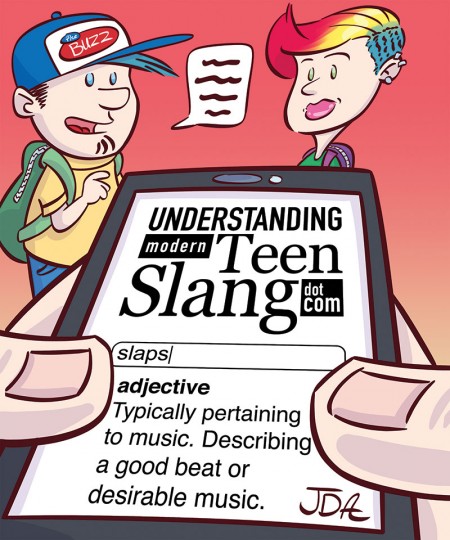 WHAT? Sometimes we need a dictionary to keep up with ever-changing teen vocabulary. (Illustration: behance.net/runamokstudios)

I know I cannot be the only parent who sometimes listens to their kids and has no idea what they’re talking about. Example: Last week my girls were telling me about a new ’fit one of them had bought. What? I thought you had a fit when things weren’t going your way. Could you buy a fit? And even if you could, why would you ever want to buy a temper tantrum?

Come to find out, ’fit is short for outfit, just one of the many elusive words and phrases I hear my girls and their friends voice.

This has been going on for a while, I am assuming not just for me. That’s why, a couple of years ago around this time, we published a “Teen-vocab primer for grownups” in an attempt to help grownups understand what their younger friends were talking about. We ended the story with, “Good luck with the lingo. And expect it to change in, oh, the next five minutes.”

It’s been more than five minutes. Definitely time to revisit the primer, especially because it has almost totally changed since – gasp – 2019. Once again, we’re working on providing an important service to our readers. Hopefully our conversations with the under-25s (or so) will be better for it. Here we go…

Buggin’ – Starting out easy here. I think I remember people saying buggin’ when I was in high school? Anyway, buggin’: Used when someone is nervous, annoyed, or paranoid. I have to be home by 11:30 because my mom is buggin’.

Bussin – Used to indicate that something, usually food, is excellent. Bussin is often used doubly. This burger is bussin bussin. Also: If you really want to get this, you should know that Janelle Rohner, a TikToker with 3 million-plus followers who posts herself eating low-carb foods, posted a video a few months ago asking for the definition of bussin. That prompted thousands more TikToks to be posted in response, depicting responders also eating, asking the question, “Is it bussin, Janelle?”

Deuces – Goodbye, or Peace. Deuces can be used when leaving a person, group, or situation; in this case it is often accompanied by the two-finger Peace sign. Or it can be used to end a conversation, as in a more colorful, “Okay.” I’m out – deuces.

Fire – This one stood the test of time, being included on both the 2019 list and our current list. Fire is an adjective used to describe something very cool. Can also be emphasized by “straight,” as in straight fire. That party was fire. This dinner is straight fire, Mom.

’Fit – As explained above, a ’fit is an outfit. A girl might Snapchat her best friend with the text, What do you think about this ’fit?

Gas – See fire; can also be emphasized by straight. Again, like bussin, usually used to describe food. These cookies are straight gas.

Lost in the sauce – This one was described to me as just vibing, which means someone is absorbed in what they are doing. You’re busy working and not listening to your child? You’re lost in the sauce.

Mosh pit – A crowd of people “dancing” really closely to one another, jumping and pushing. Also can be a verb, as in Let’s mosh. I can’t walk because my foot got stomped on in the mosh pit (a true story in our house).

Slaps – Another superlative. This song slaps.

Geek/Tweak – Used interchangeably, geek and tweak can be used to indicate adrenaline in good or bad situations. Dude, I’m geeking, I just got tickets to Post Malone, or Dude, I’m tweaking, I just failed my math test. Question from my mother: “So what do you call that thing you do with your bottom?” That’s twerking.

Saucy – Think snazzy in retro-speak. That shirt you have on, it’s saucy.

Sheesh – Used to express amazement or surprise. Jack’s girlfriend made him go shopping with her… sheesh.

Vibing – What we might describe as chilling, or going with the flow. We were all vibing to that song at Kate’s house last night.

Try a few of these out, and let us know how it goes. Or save the eye-rolls and don’t. The way some of us can’t speak a foreign language but can get by, at least you can understand.