The lost – and found – bamboo 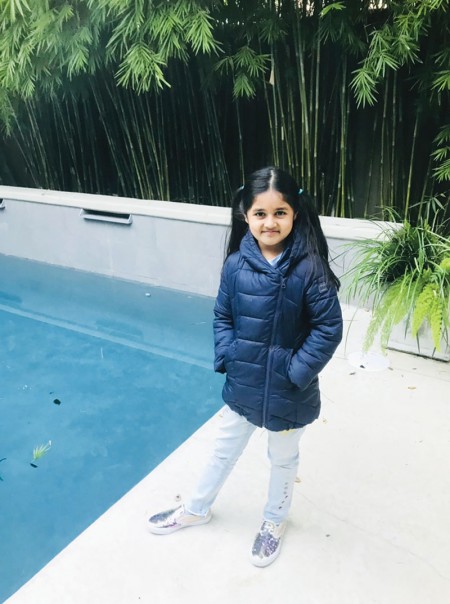 REBIRTH Raasti Kayani, a third grader at The Kinkaid School, is watching her bamboo trees grow back after they were killed in the winter storm.

I was swimming in a lake. Behind me, the bamboo swayed in the breeze and created soft and sweet music. The pandas were eating the bamboo, the gators were chomping their teeth to the beat, and the fish were dancing to the tune. Then a squirrel passed by, and I realized I was daydreaming. The lush, green bamboo, 40 feet tall in my backyard, always made me feel like I was on a tropical island in South Asia.

We had two kinds of bamboo, “Gracilis,” or “Graceful” and yellow Asian Lemon. They were like a tall living wall, which provided me with cool shade while I swam, and they even cleaned the environment. Soon the summer ended, and fall came, followed by winter. The days became cooler, but the bamboo stayed tall and green. Bamboo can survive until 18 degrees.

One early morning in February, I woke up and it was snowing. I walked across the street to my friend’s house and rang the doorbell. But the power was out, so I knocked on her door. We ended up skating on our street in the snow. Then we decided to check how cold the temperature in my pool was. And that’s when we saw it. Our tall bamboo trees were covered in snow. They were no longer dancing but were instead standing tall and still.

Many weeks passed by, and many experts came to our home to examine the bamboo. The thick green leaves were now dry and had turned brown. The flowery scent of the bamboo had faded away. There was no sign of new growth, and so the bamboo was cut to the ground. Although this was a very sad day, we were told that the roots of the bamboo were alive, and that bamboo grows very fast. It can grow about 36 inches in a day, the height of a 2-year-old child. They told us to water the bamboo each day and be patient and hopeful. Now it is June, and already the bamboo is taller than me. I see new sprouts coming. I am patiently waiting for my backyard to return to what it once was.