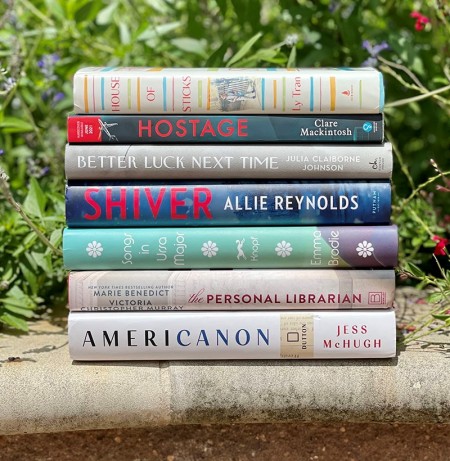 Cindy Burnett discusses her top reads of the first half of 2021.

At the end of March, I highlighted my favorite reads of the first quarter of 2021. Only two of those books are still on the list at the midyear point.

I love reflecting on the books that stand out to me and evaluating what I am reading. My list changed dramatically from the first quarter of 2021 to the first half; the second quarter of 2021 produced so many amazing books. And much like the first quarter, I have interviewed almost all of the authors, 11 of the 12, on the list below for my podcast. I am very curious to see how that trend continues as the year continues.

Here are my top 12 reads for the first half of 2021 in the order they published:

Better Luck Next Time by Julia Claiborne Johnson - Better Luck Next Time is historical fiction set on a divorce ranch outside of Reno, Nevada in the 1930s, told from the perspective of a man named Ward. The ranch houses women who are required to spend six weeks in Nevada to gain residency and then they can obtain a divorce. When the story opens, it is his present day, and he begins to reflect back on one particular six weeks, and the two women Nina and Emily that changed the trajectory of his life. The book is fantastic – I love the way she writes; I love the setting; and I really love Ward - he is now one of my favorite fictional characters.

Shiver by Allie Reynolds – Shiver is a closed circle mystery set in the French Alps which brings a group of friends together for a reunion. Upon arrival, the friends realize that nothing is at is seems and that someone will go to extreme lengths to solve a mystery from the past. The plot, the characters, and the mystery itself are all skillfully developed and kept me on the edge of my seat. I do not know very much about snowboarding, and it was fun to learn more about it – Reynolds includes just the right amount of detail. The French Alps setting is very vivid, and the toggling back and forth between the past and present works very well to slowly unveil the relevant details to the reader. I absolutely loved this book and highly recommend it.

The Three Mothers: How the Mothers of Martin Lither King, Jr., Malcolm X, and James Baldwin Shaped a Nation by Anna Malaika Tubbs - While much is known about Martin Luther King, Jr., Malcolm X, and James Baldwin, most people are unfamiliar with the exceptional women who raised these three great men: Alberta King, Louise Little, and Berdis Baldwin. In her seminal debut, Anna Tubbs brings these women’s stories to life and emphasizes their efforts to inspire and protect their children who were born into a society that resented them from day one. This beautiful homage to black motherhood is highly relevant for today’s world.

The End of Men by Christina Sweeney-Baird – Sweeney-Baird’s debut speculative fiction novel, written prior to COVID’s arrival, tackles the premise of what the world would be like if 90 percent of the men disappeared from the planet. Set in 2025, The End of Men opens just as the first case of the virus has appeared and follows various characters (mostly women) as they deal with this mysterious virus and come to terms with a changed world. Through their eyes, Sweeney-Baird chronicles how the world would be impacted by such a large gender imbalance - from the loss of husbands and sons to the changed workforce and what it now would mean to give birth to a son. The End of Men is a truly thought-provoking read that will stay with me for a long time.

Tokyo Ever After by Emiko Jean -  Tokyo Ever After is a YA book that takes place in California when it opens, and Izumi lives with her single mom. Early on, Izumi finds out that her father is the Crown Prince of Japan. She decides to visit Tokyo to meet him and from the very beginning of her visit things go awry. Izumi has a strong and independent personality, which does not sit well with the royal family. Jean brings Tokyo and Kyoto, where Izumi takes a small side trip, to life with fabulous details about the city, the food, and the culture.

House of Sticks: A Memoir by Ly Tran – Ly tells the story of how her family moved to the United States as part of a relocation program from Vietnam when she was three. They are resettled in an apartment in Queens, and they speak no English and are required to find their own work. Plus they are required to pay back the cost of their flights to the U.S.. Ly’s father spent 10 years in a Vietnamese prisoner of war camp and has severe PTSD. So on top of trying to navigate the immigrant experience, her family is also trying to cope with his anger and irrational choices. For several years they perform sweatshop work as the kids go to school during the day and work a lot of the night. Ly tells her family’s story with grace, and she provides great insight into what the immigrant experience is like for one family.

Americanon: An Unexpected U.S. History in Thirteen Bestselling Books by Jess McHugh – McHugh traces the history of 13 nonfiction books that shaped the United States from the late 1700s to the late 1900s including Webster’s Speller and Dictionary, The Old Farmer’s Almanac, Betty Crocker’s Picture Cook Book, Emily Post’s Etiquette in Society, in Business, in Politics, and at Home, and more. For each book, Americanon first details the book’s creation and purpose including information about the author(s) and then moves on to the impact the book had and why. Americanon is a thought-provoking and fascinating deep dive into how these books helped shape a nation.

Hostage by Clare Mackintosh –  Hostage is a timely and fast-paced thriller that kept me on the edge of my seat from beginning to end. Flight attendant Mina is working the inaugural flight from London to Sydney, the first time a commercial plane will fly that distance (20 hours) without stopping. Once in the air, she receives a threatening note advising her to help hostages overtake the plane or her husband and child will be killed. Told in many alternating viewpoints including Mina, her husband Adam, and numerous passengers, Hostage is clever, thought-provoking, and full of fabulous twists and turns. Advice on reading this one – do not go on Goodreads and read the reviews because important parts of the story will be spoiled; it will be a much better read if you go in blind. I highly recommend this one.

The Personal Librarian by Marie Benedict and Victoria Christopher Murray – Belle de Costa Greene worked as J.P. Morgan’s personal librarian and curator of his private library housed in a townhouse off of East 36th Street before the collection became the Morgan Library and Museum. While she became an influential individual in the art world and one of the country’s most prominent librarians, she hid a devastating secret – she was a Black woman “passing” as a white woman and moreover was the daughter of the first Black graduate of Harvard. All sorts of fascinating book-related information is woven seamlessly into the story including details related to rare books, manuscripts, and incunabula (books printed before 1501) including the Gutenberg bibles, the first books printed in English and who printed them, and so much more.