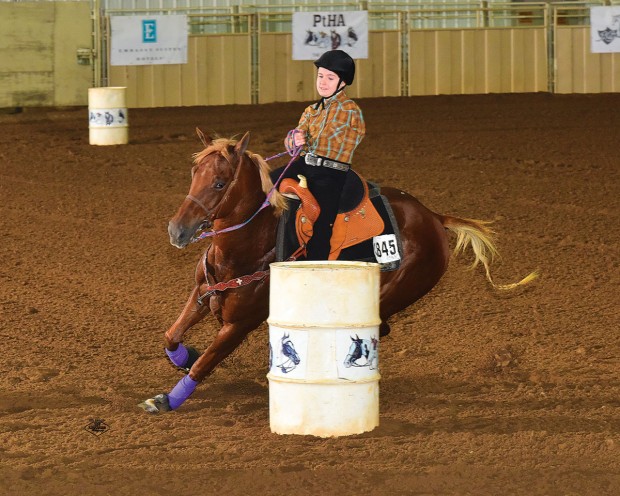 Grit and determination are traits associated with committed athletes, including equestrians – and these qualities emerged early on for 11-year-old Evelyn Kerth.

Now a sixth grader at Memorial Middle School, Evelyn has proved that her early fascination with horses was a lot more than a pony crush or cowgirl fantasy.

“I like animals, and I wanted to learn more about riding,” said Evelyn, “and once I tried it I fell in love with it.”

Growing up in the Wilcrest neighborhood, Evelyn had no particular exposure to the horse world. 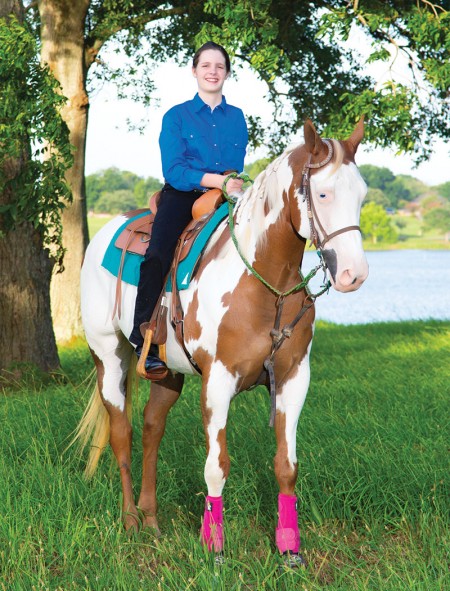 Evelyn Kerth and mare Selena, both 11, are back from competing at the Pinto World Championship Show. (Photo: lawellphoto.com)

“When she was 8, I found a Groupon at a Memorial-area stable, so she had a horse birthday party,” said Cindy Kerth, Evelyn’s mom. “After that, she was interested in trying some lessons. And so it really started very casually.”

It was at one of those early lessons that Evelyn crossed paths with a special pinto horse named Rodeo and horse trainer Marcus Frazier. Pintos are a color breed distinguished by patches of white and another color, often brown or black.

“This trainer suggested that she started taking Western-style riding lessons because that can be done with one hand,” said Cindy.

It was a momentous piece of guidance, given that Evelyn was born without a left arm.

“We found out at the 20-week ultrasound that she did not have an arm,” said Cindy. She and her husband, Jason, are both engineers who met at Texas A&M and now have three children: Evelyn, 9-year-old Clara, and 6-year-old Andrew.

“There was never really a cause diagnosed. They said it was probably like a blood clot, or some kind of vascular incident that didn't allow her arm to grow. She is our oldest, so we were worried. She has definitely proven to us that we didn't need to worry.” 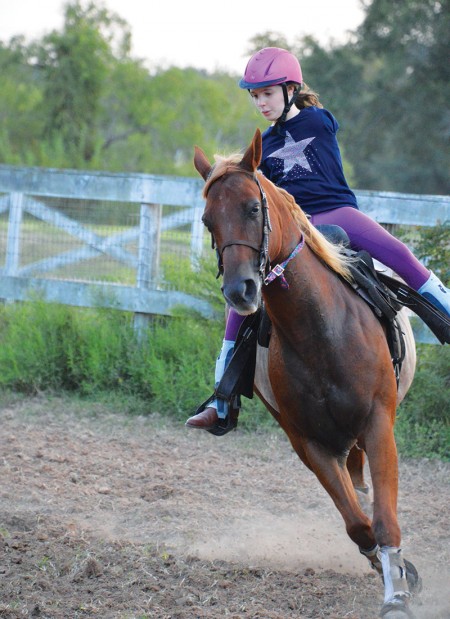 Western-style riding is a broad term encompassing a variety of riding sports that have evolved from ranching. Riders use a heavy-duty saddle and usually steer with one hand by “neck reining” the horse, who is trained to respond to body cues and light rein pressure against the side of the neck.

To mount a horse with one arm, Evelyn must use her whole body for strength and her chin to grab the reins, always being careful with the placement of her spurs. Rodeo, a 17-year-old mare, is steady and sure, having given hundreds of lessons to new riders, but she seems especially aware of Evelyn, compensating for any imbalance. The collaboration is a product of connection and trust.

“They can adjust themselves and do as they see fit to help the rider,” said Marcus, owner of Marcus Frazier Performance Horses. “She [Rodeo] will literally try to catch them [riders] if they start to slip a little.”

The team practices at Independence Stables, a rustic boarding stable in Stafford where Marcus keeps his horses. It is a long process just to get ready to ride, wrapping the horses’ legs, adjusting the tack. Out in the arena, dirt is flying, and the team of horse and rider practice run after run. Marcus commands: “Ride her up! Sit down! Lean forward! Straight down the middle!”

“As soon as Marcus paired these two together, I feel like they could just do things like spins. I was amazed at how well they clicked. It was a match, and it was real cool to watch,” said Cindy.

Their progress was so rapid that Evelyn decided to try barrel racing. At the age of 10, she went to her first competition, and it was a big one: the 2020 Pinto World Championship Show in Tulsa, Oklahoma. She won reserve champion (second place) in Youth Amateur Barrel Racing.

Evelyn was hooked. The team started practicing for the 2021 show, and then they found out Rodeo was in foal. Evelyn had to start the training over with another mare, Rodeo’s 11-year-old daughter, Selena. She is friskier and less experienced. 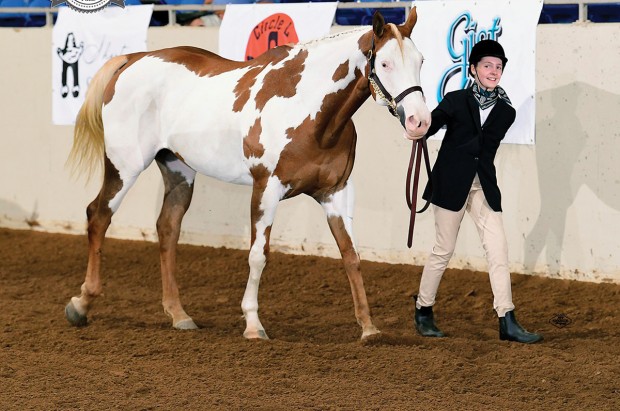 “Trust is a big part of it. I noticed when I’m on a different horse, they react differently. It’s a lot harder work,” said Evelyn.

The two practiced only a handful of times together. But they went to the 2021 Pinto World Championship Show in Tulsa in June. This time, 11-year-old Evelyn was the one with experience. Even though it was Selena’s first time on the clock, the duo placed third in Youth Amateur Barrel Racing. In fact, Evelyn and Selena placed in the top 10 of every class of competition, including ranch rail pleasure, halter, and (in second place) youth amateur keyhole.

Evelyn doesn’t claim any handicap and competes with non-disabled youth ages 10-18. “I don’t treat her any differently,” said trainer Marcus. “I believe in that little girl more than I believe in myself.”

Dad Jason Kerth says his daughter has a natural toughness at her core. He remembers worrying how she would ride a bike.

“We even took her to a specialty hospital to talk about some sort of prosthetic for bike riding, but they said her limb difference is so high up on her that it’s impractical to use any kind of prosthetic,” said Jason.

He remembers the staff simply recommended a recumbent bike. That suggestion proved a glaring underestimation. These days Evelyn commands a two-wheeler just as well as her friends and has no problem riding bumpy dirt trails in Terry Hershey Park.

Riding is not Evelyn’s only activity. She has played soccer, and she’s been taking ballet, jazz, and contemporary dance at the Houston Academy of Dance since she was 5. She plays video games better than her siblings, using her hand and her chin to maneuver the game controller.

“I kind of think there are limits to what I can do,” said Evelyn. “But I try my best to do what I can and find out what I can’t do and try to work on that.”

“Evelyn never looks at the obstacles around her as though they are obstacles,” said Casey Poche, one of Evelyn’s past teachers at Wilchester Elementary. “Evelyn is a student who has taught me not to look at myself as if I have limitations, but as if my opportunities are limitless.”

True grit looks good – both on and off pintos.