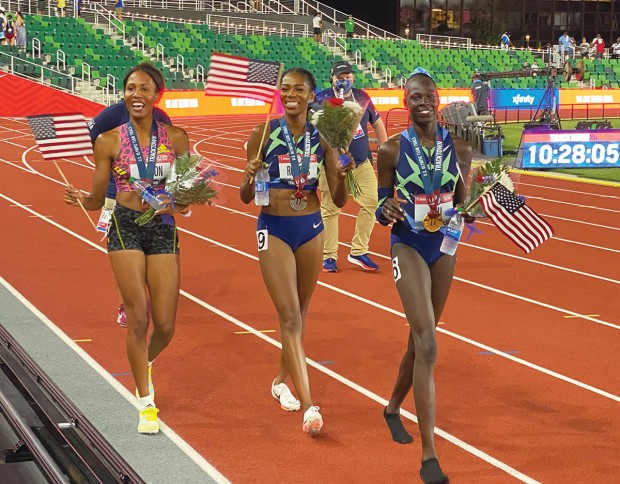 OLYMPIAN Former Kinkaid track and field star Raevyn Rogers (center) celebrates at the U.S. Olympic Team Trials after qualifying for the Summer Olympics in Tokyo. She is with fellow Olympians Ajeé Wilson (left) and Athing Mu.

In 2014, Kinkaid Falcons senior Raevyn Rogers blazed her way to the nation’s fastest high school time in the 800-meter run. Flash forward seven years, and Rogers is still on the fast track, representing Team USA at the Summer Olympics in Tokyo, Japan.

She qualified for her first Olympic games with a powerful second-place finish at the U.S. Olympic Track and Field trials in Eugene, Oregon, in late June.

“Everyone at Kinkaid is so proud of Raevyn,” said former Kinkaid girls track and field coach Cheryl Mitchell, who made the trip to the Olympic trials to cheer on Rogers. “Anyone who had the opportunity to coach or simply spend time with Raevyn at Kinkaid admired her integrity and work ethic.”

Following her illustrious high school career at Kinkaid, where she continues to hold school records in multiple events, Rogers then went on to star at the University of Oregon as a six-time NCAA Division 1 champion and a 10-time All-American.

“I’m not surprised by her success in one bit,” said Mitchell. “Raevyn was one of the hardest working athletes I’ve ever coached. But more than just being extremely competitive, she was someone who cared for her teammates and made our team better with a special joy she brought to the track.”

These days, the admiration for Rogers is evident; her image is one of a few selected track athletes posted on Bowerman Tower, which is part of the new track and field stadium at the University of Oregon and the site of the Olympic trials. “It was so emotional for me to be on hand to see that kind of respect for Raevyn,” said Mitchell. “The fans in Oregon simply loved Raevyn, and then for her to earn an Olympic berth was so emotional. All the sacrifice she’s given to the sport is deservingly paying off.” 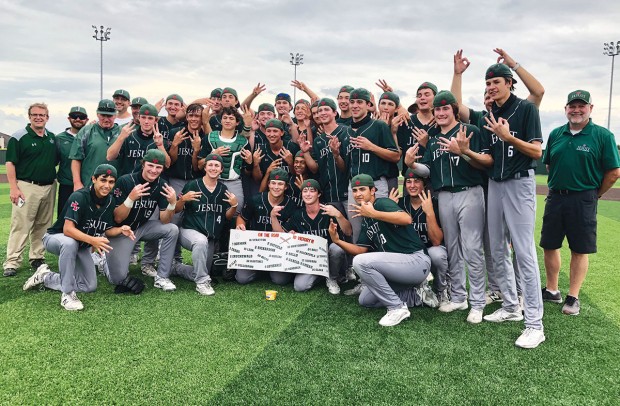 HISTORIC SEASON The Strake Jesuit Crusaders baseball team celebrates after winning the 6A Region III baseball championship with a two-game sweep over Jersey Village. The victory earned Strake Jesuit its first-ever berth to the UIL 6A state baseball tournament.

While the new school year quickly approaches, the past school year closed out in phenomenal fashion for the Strake Jesuit Crusaders baseball team, which earned its first-ever berth to the UIL 6A state baseball tournament. The Crusaders’ road to the state Final Four included victories in 15 of its last 17 games, including six of its last seven regular-season games just to make the playoffs.

“I told the kids that once we got into the playoffs anything can happen,” said Crusaders head coach Raul Garcia-Rameau. “The guys were very composed and played awesome baseball over a long stretch of must-win games. Once the wins kept coming, so did our confidence.”

To get to state, the Crusaders defeated five tough Class 6A opponents in the post-season playoffs, including state No. 3-ranked Katy Tompkins as well as a two-game sweep over Jersey Village to win the 6A Region III championship. “I think it all started with us having our backs against the wall late in the district race,” said Crusaders senior Andy Leon. “It was either win or go home, and I believe that sort of mental toughness pushed us to state. There’s nobody else I would have wanted to do this with than the guys on this team.”

For Crusaders senior Connor Bartlett, the run to the state Final Four had added significance. “My dad and brothers all went to school at Strake Jesuit, so for me this is a really big deal,” said Bartlett. “I’ve been coming to watch the Strake-St. Thomas rivalry games and a lot more since middle school, and for us to make school history is really special.” 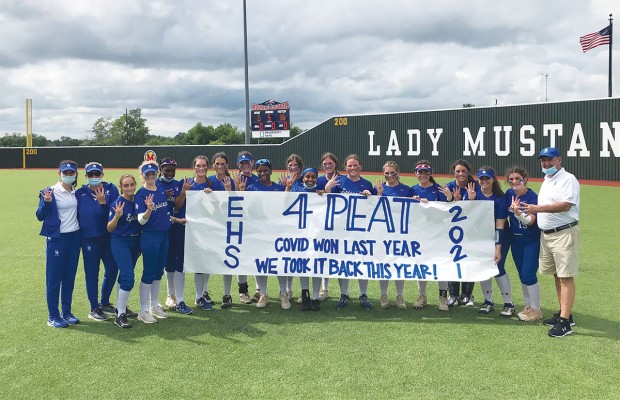 FOUR-PEAT The Episcopal Knights hold up their 4-Peat banner after winning the SPC softball championship for the fourth consecutive season. The Knights won their final 12 games in a row, including a decisive 16-0 victory over Fort Worth Country Day in the SPC championship final.

In softball, the Episcopal Knights capped off a magnificent season by winning their fourth consecutive SPC championship, having secured the title with a dominant 16-0 victory over Fort Worth Country Day in the SPC title game.

“With last year’s season taken away from us because of Covid, this championship is all the more meaningful,” said Knights head softball coach Caitlyn Cain. “We won 12 games in a row and didn’t lose a single game after Spring Break. The girls truly dug in and didn’t take a single game or practice for granted.”

At the plate, freshman Townsen Thomas had a team-high batting average of .500, while fellow freshman Allie Williams hit for a lofty .457 average with a team-leading seven home runs. Junior catcher Lily Tanner was also an offensive force with a batting average of over .400. On the mound, No. 1 pitcher LeAnn Dromgoole led the way with a 2.8 ERA.