All in to understand psychology 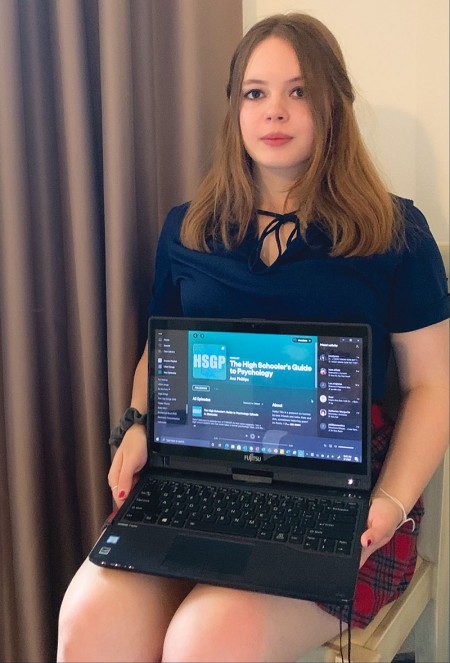 PODCAST HOST Ava Phillips, a senior at St. Agnes Academy, writes and produces a podcast to teach herself and other high schoolers about psychology.

In the seventh grade, I decided to get a Ph.D. in psychology. I planned my future accordingly, from high school electives to the length of doctoral programs. In the end, I was looking at about 12 years of psychology classes. Twelve whole years was a long time to think about, especially since I was only 14 at the time. I wasn’t even sure if I would enjoy psychology class. I could change my mind after the elective, but that would leave me months to decide on a new plan before college started. After a bit of deliberation, I found my answer: I would teach myself psychology.

Reading textbooks was boring, and YouTube videos didn’t stick, so I decided to make a podcast. I would first make a list of topics, and then I would research, write, record, edit, and post each episode. By spending so much time with the material, I would learn psychology; I would finally decide if psychology was my calling.

Though I love podcasts, I had never realized just how hard it was to make one. After two years, I finally had the first 10 episodes written. These episodes had already taken more effort than I had hoped at first, but the result was worth it: I was absolutely in love with the topic. Every second, I grew more excited for my college courses. I bounced between wanting to specialize in memory like Elizabeth Loftus and wanting to pioneer maladaptive daydreaming; I grew obsessed with Industrial-Organizational Psychology. A few months later, I had the first four episodes ready to post.

I was finally ready to post my hard work. Through my editing website (anchor.com), I published the first four episodes of “The High Schooler’s Guide to Psychology” online. I was additionally able to apply to various podcast apps. My podcast was picked up by Spotify only a couple of hours later. It has been so many years in the making, but in the end, I have accomplished everything I set out to do and have a dozen more ideas to write about.