And then they had grandkids 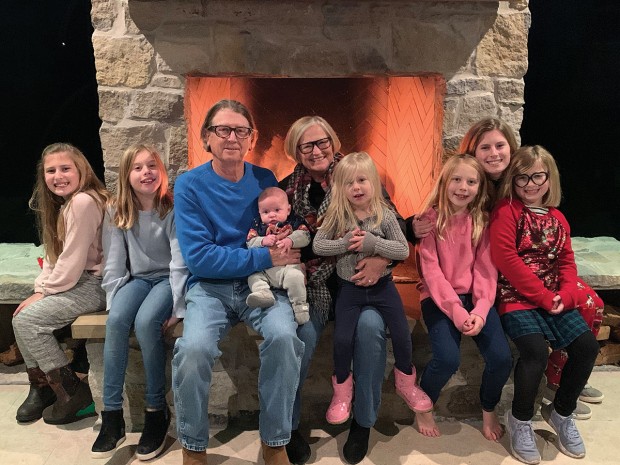 He’s a petroleum engineer, and she’s a litigation attorney: two professionals who have found success and fulfillment in the professional sphere. But what has brought true happiness to Chuck and Mary Lou Strange can’t be found in a boardroom or an oilfield. It can be found, however, at their Hunters Creek home or on the road with one or more of their seven grandchildren: Annabelle Strange, 15; Adelaide Strange, 12; Macy Jacobs, 10; Ainslee Strange, 9; Sloane Jacobs, 8; Letty Jacobs, 4; and Matthew Strange, 1.

“I thought I loved you,” Chuck once remarked to his daughter, Caroline, with a laugh. “Then I had grandkids.”

“He just fell in love, and it’s never stopped, with every single one of them,” said Caroline.

The Stranges have worked out a living arrangement that puts that relationship at the center of their lives. The kids have grown up with Yiayia and PawPaw, as they call them, within walking distance of their homes ever since. They drop by and have dinner once or twice a week, and spend hours around the pool and in other activities.

So three years ago, when Annabelle turned 12, they began a new tradition. The couple had taken up hiking with a passion and had been going to West Texas, hiking in Big Bend National Park and then sharing their adventures with their grandkids. “They made it sound so amazing, and I told them, ‘I want to go, too!’” Annabelle said. 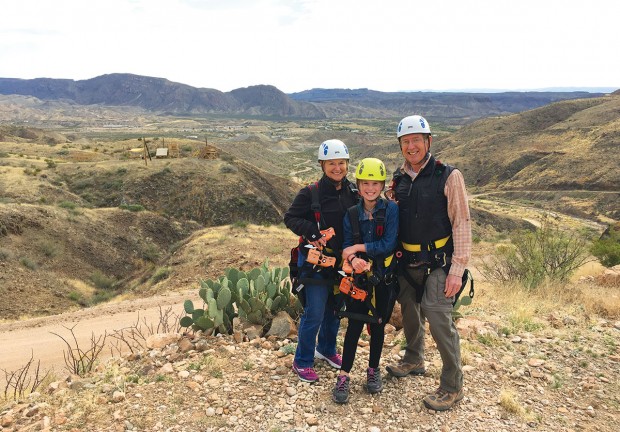 Mary Lou, Annabelle and Chuck Strange (from left) got the adrenaline flowing on a Flying Goat zip-line tour at Lajitas, Texas.

So on her 12th birthday they showed up on her doorstep with a card and a guidebook. “And they said, ‘All right, you said you want to go. Happy Birthday – we’re going to take you,’” recalled Annabelle.

Mary Lou and Chuck had realized that Annabelle was ready for a trip of her own. “By the time they’re 12, their thinking is sophisticated, and they’re looking toward the future and learning both workwise and leisure time-wise about what will make them happy,” said Mary Lou. “And that’s part of the point of these trips – but I have to say, we always learn plenty of things from them, too, anytime that they’re around.”

Normally the Stranges stay at the heart of the wilderness in the elegant Chisos Mountain Lodge. But this time they livened up the itinerary with a stay in Lajitas, where they all got their adrenaline pumping with a zip-line tour over the desert.

“It took her a while to warm up to the zip line,” said Mary Lou. “It ended up being a real confidence booster for her.” Chuck and Mary Lou strapped themselves in and went sailing across the canyon as well.

They took Annabelle to the Starlight Dinner Theatre in the quirky former mining town of Terlingua – an excellent pretext to people-watch in a place that Chuck called “quintessentially demonstrative of that whole Big Bend area.”

“The people who live in that area are used to the harsh desert environment: very self-sufficient, rugged individualists, and they dress like it and talk like it,” said Mary Lou. “One man we used to always see at Starlight every time we’d go ... would walk in with his cowboy shirt and jeans and a hat, and he always had a huge knife in a scabbard at his waist.”

They took her to some of their favorite places, such as the Rio Grande and the Santa Elena Canyon. They hiked some of the shorter trails, like the Windows Trail and the Lost Pines Trail. 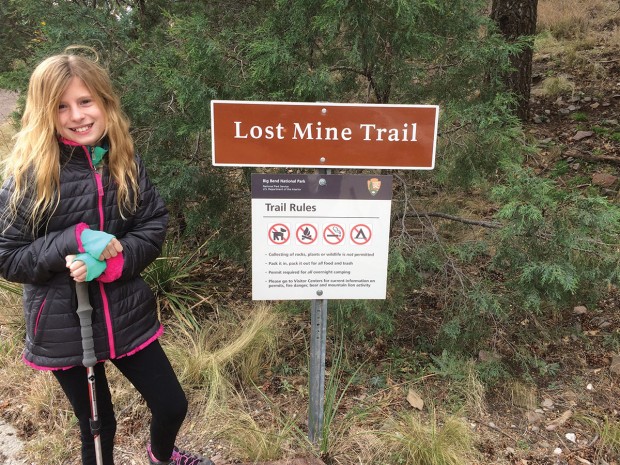 Annabelle Strange on a hiking trail in Big Bend, on her 12th-birthday grandparents trip.

But what stands out most in her memories was the simple pleasure of being with her grandparents.

“I remember waking up every morning of that trip, smelling the coffee they were making. And they always had the Today show on just like they have at their house. So that was really special.”

And for her grandparents, it was the chance to get to know Annabelle a little better. The 10-hour drive was an opportunity for some long talks.

“We found out a few things about Annabelle that we didn’t know before,” said Mary Lou. “We did get to see a side of her we hadn’t seen before, and that was sweet and dear.”

Adelaide – or Addie, as her family calls her – just turned 12 in May. She had been fishing since she was 6, when her father took her and Annabelle saltwater fishing. She came back and began throwing a line into PawPaw’s swimming pool from her little plastic pole – she was hooked, and begged her father to take her saltwater fishing every chance she got.

So her grandparents were pretty sure she’d want to go on a fishing trip, and they offered her a spectrum of choices, including the coast of Florida. She surprised them with a request to return to a place they’d taken her many times: Port Aransas.

They took her to their condo at Port Royal Ocean Resort and hired a captain with a boat just for the three of them.

Their first night they ate at Lisabella’s Bistro and Bar, Addie’s favorite. “Addie commenced to have fish for dinner – she said that would help her on the fishing trip,” recalled Chuck with a laugh.

The next day they went out on Aransas Pass, where they had a nice half-day fishing trip and caught some small trout and redfish. Addie chatted up the guide about how to catch the fish.

“Adelaide knows how to hold a conversation,” remarked Chuck.

The captain was attentive and kind.

“He did such a good job of showing her exactly how to do things, telling her why he was doing the things he was, what kind of fish we were fishing for,” said Mary Lou. “It’s just the type of experience we wanted her to have, to gain some experience and hone her skills.” 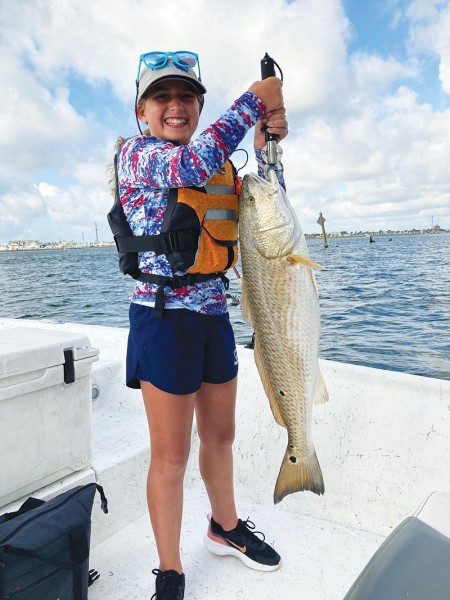 Port Royal was the ideal accommodation for a sociable 12 year old; on the first morning she immediately befriended a group of kids from all over the state. The hotel’s pool complex features a series of “magnificent floats,” according to Chuck. “It's like running an obstacle course in the swimming pool, and the kids spend hours and hours jumping and swinging and swimming and sliding through this obstacle course.”

It was the perfect counterpoint to the trio’s solitary sojourn at Aransas Pass, the highlight of which was a catch Addie could never have imagined. “I caught a 32⅔-inch redfish,” she said, still a bit breathless with excitement. “It was really, really hard to reel in, because redfish are really big, and he had a lot of fight in him. But I told PawPaw I was going to break his record, and I did.”

Adventures on the horizon

The next one to turn 12 will be Caroline’s daughter Macy. Macy is quite the fashionista, and she had her sights set on Paris – or maybe New York. Her grandparents had to dial the expectations back a bit to keep things fair, but, casting about for ideas, hit on Dallas as a Texas fashion hub – but time will tell. And Ainslee, who will turn 12 the year after that, is thinking a fishing trip would be nice, but she’s still contemplating her options. 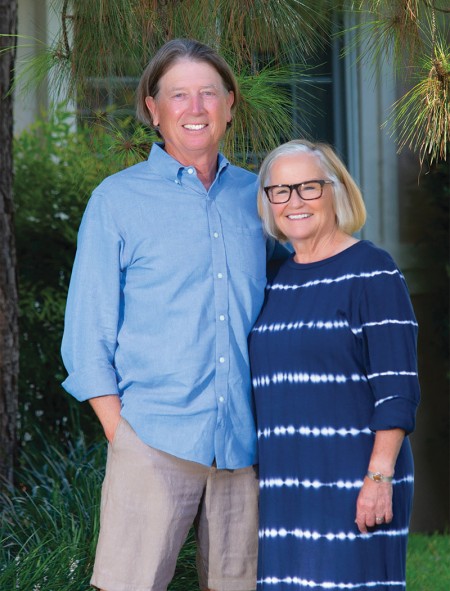 Chuck and Mary Lou Strange have given themselves a promotion in their retirement: from petroleum engineer and attorney to gold-star grandparents. (Photo: lawellphoto.com)

For Katherine, the relationship with Mary Lou and Chuck has been a real blessing – far from the stereotypical in-laws. When Matt was deployed for the second time, she was studying law in Houston, and they invited her to stay with them. They bonded, and they’ve been close ever since.

“I think a lot of people kind of have the attitude that once you raise your kids, your job is done, and you're going to go off and travel and do whatever,” reflected Katherine. “But my mother-in-law is an attorney, and I'm an attorney, and so is my sister-in-law, and we all work a lot. So having in-laws who have been through what we are going through now, trying to raise a family and juggle a career and have healthy marriages – they've modeled that so well for their own kids.”

The blessing is for all involved. Mary Lou recalls a short trip she once took with her grandmother and how special it was, and she wanted to take that idea and run with it.

“I think it’s really a special gift for all of us,” she said. “I think this is something they’ll hold on to for their whole lives.”