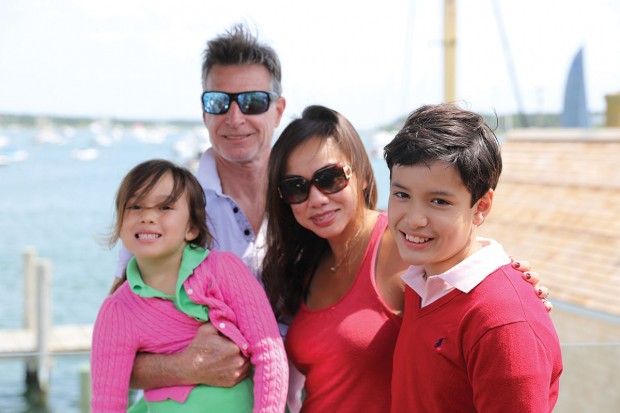 THE CATCH OF A LIFETIME The Shults family – (from left) Audrey, Bob, Jennifer, and Blake – enjoyed an unforgettable fishing trip during their time in Cape Cod.

For Bob, it was a chance to land the catch of a lifetime while treating his wife and his kids to an anniversary adventure in Cape Cod. For Phylis, it was an opportunity to spend a special week with her daughter, two grandsons, and sister on an unforgettable voyage in the coastal bays of Maine. And for both families, it was the seafaring trip of a lifetime.

Bob Shults and his wife Jennifer were married in Italy, so they celebrated their June 21 anniversary there for 17 years before Covid took the wind out of their sails in 2020 and left them grounded in Houston. This year, with the pandemic still hanging on, they decided to celebrate – but in a safe way, and closer to home. Bob’s a New York native, and the Eastern Seaboard has always called to him. So they decided to head to Hyannis on the Cape Cod peninsula in Massachusetts.

Phylis Tomlinson and her daughter Allyn Wise were enjoying a Mother’s Day dinner and talking about summer vacation when the idea came up of a windjammer cruise exploring Maine’s dramatic, rocky coast. Grandsons Zane, 13, and Cade, 11, thought it was a fine idea, and so did sister Beth. And so it was settled. 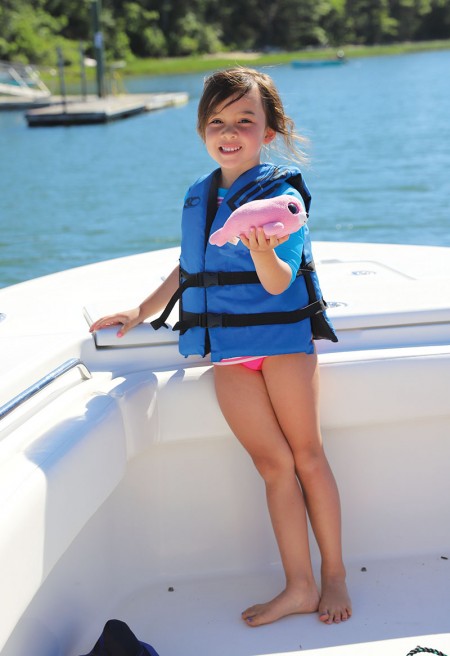 Five-year-old Audrey brought her stuffed seal Pinky along so he could meet his family.

Bob’s wish was to go tuna fishing. However, that usually means a long trip to deep water, which can be rough.

“The family agreed to a compromise to start the day fishing for striped bass (Dad), look for seals (Audrey, 5), look for whales (Blake, 11), and get some sun (Jennifer),” wrote Bob in an email to The Buzz. “Prior to the day of the trip, Captain Matt mentioned that on occasion there may be tuna under the whales. I told him to bring some rods.”

The day of the trip, the conditions were ideal: flat water with only a slight breeze. The water was crystal clear, as was the sky, a beautiful sunny day.  “Check the box for Jennifer,” wrote Bob.

They left the harbor and brought along Audrey’s stuffed seal, on a mission to introduce Pinky to her family.

“Captain Matt did not disappoint. We saw many seals, both grey and harp. Check the box for Audrey,” wrote Bob. 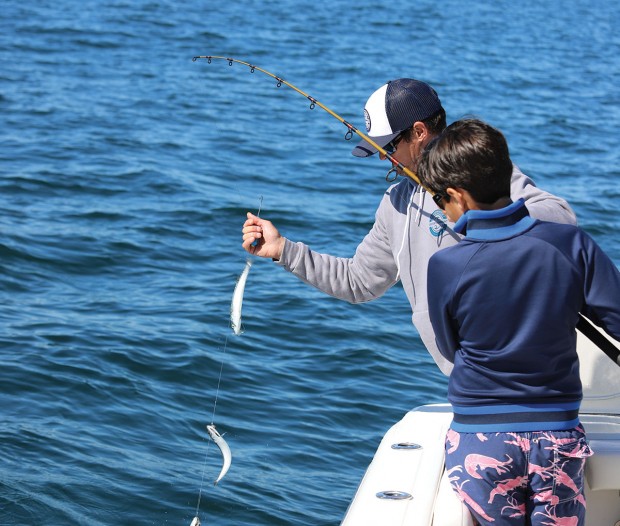 11-year-old Blake and Captain Matt dropped a line in the water, and the Shults family soon had a live well full of bait-size mackerel.

Because the conditions were so ideal, Matt chose to skip the striped bass fishing and head out further and look for whales. No more than three miles out, the water was exploding with wildlife. Birds, bait balls (small fish swimming in a tightly packed spherical formation), mackerel jumping.

“My son dropped a line in the water, and we soon had a live well full of bait-size mackerel. We also started to spot whales… hundreds of them. Minke whales, finback whales, and humpback whales. Check the box for Blake,” wrote Bob.

Captain Matt put out three lines with balloons, which served as bobbers. A quick tug would indicate something – hopefully a large fish – pulling from below. No luck.

The group sailed on, perhaps a mile, to get closer to the humpback whales that were frolicking about and breaching over and over. Matt saw something on his radar and dropped a single line.  “We immediately heard the awesome sound of the line screaming out,” wrote Bob.

After about an hour and a half, they landed a bluefin tuna that weighed nearly 500 pounds and was more than 8 feet long. 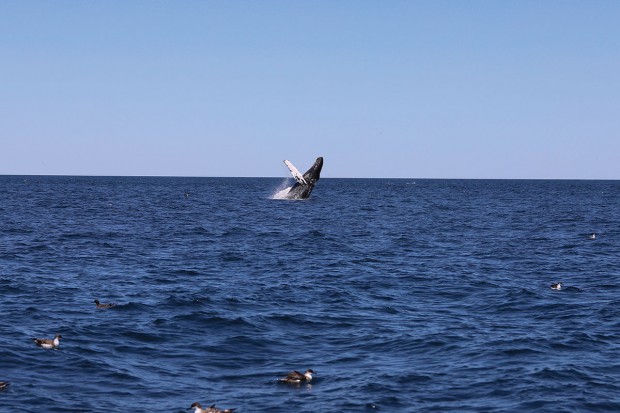 No more than three miles out, the water was exploding with wildlife; the Shults family spotted hundreds of whales – Minke, finback, and humpback.

“The excitement of landing this fish with all the whales threatening to snap the line was intense. Getting it into the 35-foot boat and into a collapsible cooler was also an adventure. What a magnificent fish. Check the box for Dad,” wrote Bob.

Because the tuna was in excess of 70 inches, it was considered commercial and was the property of the captain, who sold it when they landed back in the harbor.

“We wrapped up the day with a relaxing dinner at the wonderful Chatham Bars Inn overlooking the water. Captain Matt: ‘What a day. Hard to top.’” 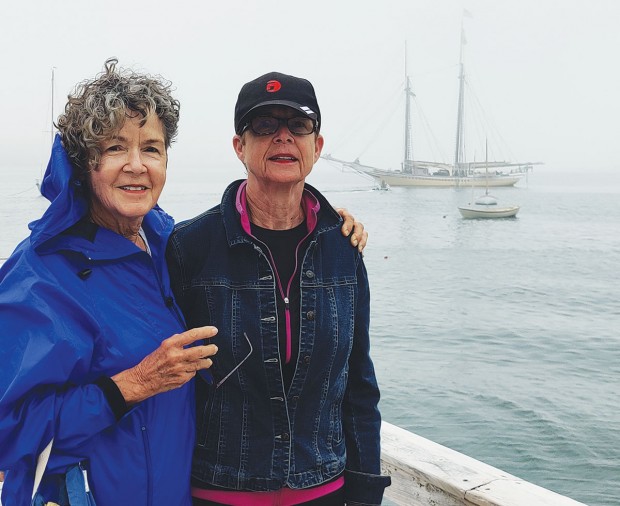 Wandering on a windjammer

Phylis and her sister Lee had done a windjammer cruise in 1984, skipping from bay to bay, and the experience had left them with wonderful memories. Windjammers are the grandest of the cargo sailing ships that plied the seas in the 19th century, these days employed mainly in the tourism industry. So when they were casting about for ideas for a family vacation – it had to be in the U.S., it should be a cool summer destination, and it should be an adventure – it was an obvious choice.

This time Phylis would be joined by her other sister, Beth, and her daughter and grandsons. They met up with Beth in Boston and took a bus, a Concord coach, up to Rockland, Maine, a 4.5-hour ride. They arrived on a Sunday and headed for Penobscot Bay, where at 6 p.m. that same evening, they boarded a two-mast schooner, 93 feet long from bow to stern – a tall ship named Heritage that would be their home for the next six days and nights.

“It’s not all the creature comforts of a regular cruise,” said Phylis. “One of the people talked about it being like camping on water – cabins are small, there’s three lavatories on the schooner and one shower.”

That was for about 35 passengers and crew, including Captain Sean and Captain Ben, who owned the boat: the Heritage Schooner. Prior to boarding, each passenger had to show either proof of vaccination or a recent negative Covid test. 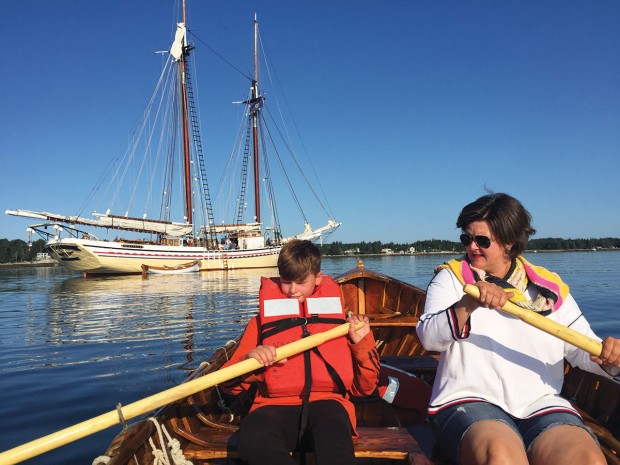 Phylis's daughter Allyn and grandson Cade row as Phylis enjoys the ride aboard the “Lois Lane” out from Schooner Heritage (background).

Each captain took a small group on a tour of the vessel, pointing out auxiliary vessels (a one-person sailboat, a larger rowing boat, and a small rowboat for four to five people).

“It was so cool we made good use of the wool blankets, both topside and in our cabin,” Phylis said. They were all enchanted with the pristine, calming, and peaceful bays of Maine, with the rhythms of sea and sky, the rocking of the waves, the wind against the sails, the occasional sightings of gulls, osprey, and cormorants.

A simple but delicious menu featuring a lot of seafood was prepared on a wood stove. Breakfast was served below deck in the galley, alongside the kitchen. There, the captain would announce each day’s itinerary. Lunch was served above the deck, on the foredeck. Dinner was there or in the galley, determined by “where the wind blows.”

One particularly unforgettable meal began with a trip by rowboat to a place called Lobster Island. There they had a lobster bake over an open campfire, and the shellfish were served with lots of butter and salt.

“The shells were soft enough we didn’t need any utensils; we just used our hands,” marveled Phylis.

For Phylis, one of the best parts of the trip was when they could participate as a team in the work of sailing the ship: hauling lines, folding sails, hauling up the auxiliary boats after they were finished using them. 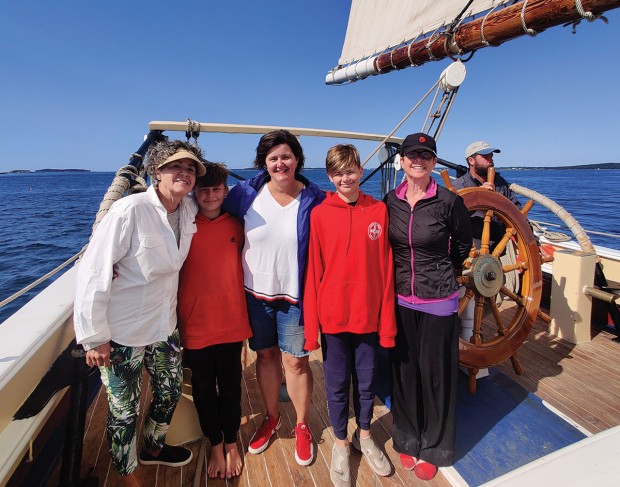 Final morning family photo on the bow of Heritage – Phylis and daughter Allyn with Cade, Zane, and their Aunt Beth Tomlinson.

“There were plenty of times where we asked to haul the line – we don’t call them ropes in sailing,” she said. “We could help bring in the anchor at times; we could also help in the galley, drying flatware and putting dry dishes away in secure cabin spaces.”

For the kids, it was jumping off the side of the boat into the chilly waters, or climbing the jib boom with the help of crew, which took them out to the farthest point on the schooner – and they would jump from there into the water, a thrilling 15-foot jump. It was a treat when the captain lit the small cannon. It made a great boom and echo.

“The captain said every day was a surprise; it depended on the wind,” she said. In the evenings they would drop anchor in a small cove where they often saw seals and a few dolphins and birds fishing. That’s when folks swam off the side of the schooner – in 50-degree water.

The whole family bonded with the captains and the crew; the boys helped pull the lines, the girls taught one sailor how to knit. They sang along when the captains played guitar and learned a sea shanty that they all sang while raising the mainsail. And Phylis will never forget the words of one of the captains when asked where they were headed next:

“If you’re happy where you are, it doesn’t matter where you go.”

It always depended on the wind – and sometimes there was none at all.

“I’m an art therapist and a marriage and family therapist, so that really rings my bell,”  said Phylis of the bit of seafaring wisdom.

But the best part for Phylis was the memories they will take with them of all the family having an adventure together. She was the only one in her family group who had been sailing; for everyone else, it was an entirely new experience. And the camaraderie and teamwork of onboard life was a lesson for all of them. 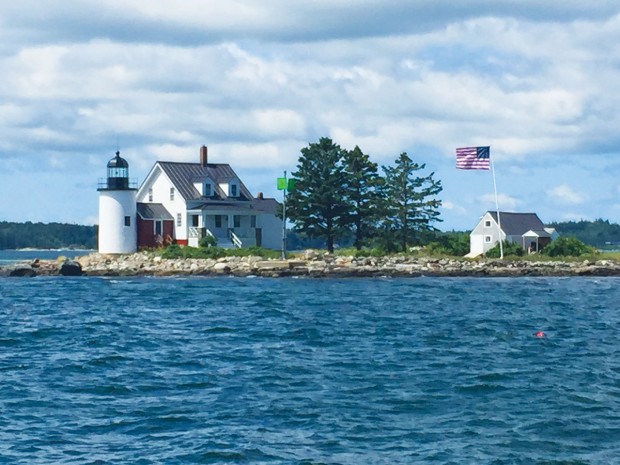 One of many picturesque views in the bays of Maine.

“The power, the joy of people living and working together under such conditions – being so gracious to one another in such a tight space – it was so delightful,” she said.

She appreciated the way that the captain and crew took the boys under their wing and taught them things, treating them with the utmost respect. Everyone honored quiet hours and coffee was on deck at 7 a.m.

Zane and Cade loved sleeping on the deck the last night on board. That was a chilly thrill for both of them, wrapped in blankets and falling asleep to the sound of the lapping waves against the sides of the Heritage.

And while in Boston, prior to returning to their respective homes, they took in a Red Sox game vs. the Yankees at the famous Fenway Stadium. To their delight, the Red Sox won.

“I would do it again in a heartbeat,” Phylis said.