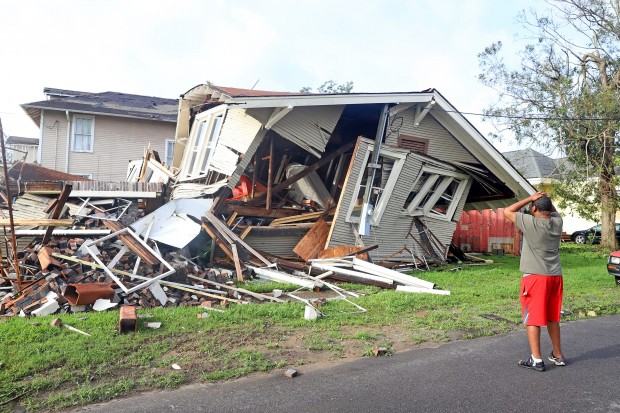 New Orleans resident Dartanian Stovall breaks down at the sight of his home that was destroyed in the path of the hurricane. The house collapsed with him inside of it during the height of the storm. (Photo: Michael DeMocker)

I stepped out of the bathroom, feeling clean and refreshed after a nice, long, steamy shower. Draped in three warm, fluffy towels, I sashayed down the hallway to my room. “Hey, Mick!” My heart skipped a beat - I was supposed to be home alone! I whipped my head around to see my older cousin Peyton, dwarfed by two huge suitcases. “Sorry, didn’t mean to scare you!” Peyton is a graduate student at Tulane University studying law. Her semester began weeks ago. What could she possibly be doing here? On a school night, no less?

Peyton was one of thousands of students in the Louisiana area who had to evacuate campus in the few days before the devastating Hurricane Ida made landfall.

“It started off with an email from the administration,” she explained to me. “It went from ‘Stock up on snacks and bottled waters; we're going to be expecting a little rainfall’ to ‘There is a Category 4 hurricane headed our way. Board up windows. Those with the option to evacuate should do so immediately’ within just a few hours.” Peyton immediately called my mom and asked if she could stay a few nights; “I’m really, really scared,” she’d said over the phone.

Now facing the aftermath of Hurricane Ida, citizens of Louisiana struggle to put their lives back together. Named the seventh most costly hurricane of the twenty-first century, Ida has racked up almost 100 billion dollars worth of damage, says NBC. Unprecedented levels of flash flooding, absurd amounts of property damage, and winds of up to 150 miles per hour wreaked havoc on Louisiana and its coast line.

Some joke and say that the college you pick is essentially which natural disasters you’re willing to put up with. With record-breaking hurricanes and torrential flash flooding in the South, destructive wildfires and droughts in the West, and bone-chilling blizzards in the North East, the aspiring American student is left with very few options where they are guaranteed safety from natural catastrophes.

Everyday, we face more extreme weather due to climate change and massive increases in greenhouse gas emissions. As a community and as individuals, it is our duty to help those around the country rebuilding after an extreme weather event - our neighbors in Louisiana are no exception.

There are many locations in the greater Houston area such as Lakewood Church, the Red Cross, and Bethel’s Heavenly Hands that are collecting donations such as: non-perishable food, pet food, bottled water, diapers, toiletries, menstruation products, towels, and linens for our friends and family in Louisiana who are struggling to pick up the pieces of their lives. We can rebuild and persevere, as long as we do it together.