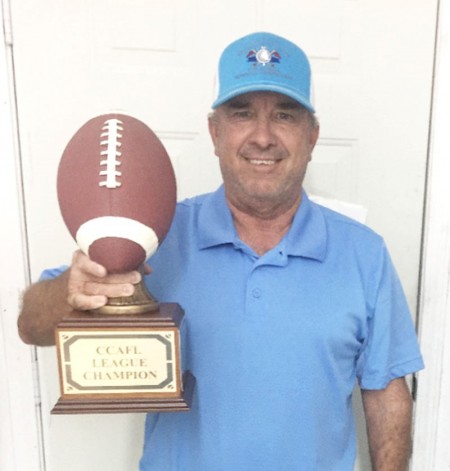 Mark Carter, 2019 champion of the Corpus Christi A-Hole Football League (CCAFL), proudly displays the fantasy football trophy that he received last August. On the upcoming Draft Day, the trophy will be passed on to Andrew Fuller, the 2020 league champion.

After 21 years of waiting, my husband Andrew has accomplished a lifelong dream . . . winning his fantasy football league. Many of the league’s team owners are Andrew’s childhood friends from Corpus Christi. During their daily lives, the guys appear to be responsible middle-aged men, but not so much when it comes to fantasy football drafting and banter, which is of course one of the reasons they love it so much.

This Labor Day weekend, when the league gathers for their 2021 draft, Andrew looks forward to receiving the 2020 winner’s awards including a prized championship trophy with his name engraved on it for all of infamy. His new shiny prized possession will live at our house in Houston until August 2022. He's brainstorming the best place of honor to display it. I’m brainstorming the best way to angle it so visitors to our house won’t have to stare at the trophy for The Corpus Christi A-Hole Football League (CC-AFL).

Fantasy football was born in 1962 when Bill Winkenbach, part owner of the Oakland Raiders at the time, and some friends gathered at a New York City hotel. After a few cocktails and male bonding, they sketched out some rules and guidelines to create the first fantasy football league, dubbed the GOPPPL (Greater Oakland Professional Pigskin Prognosticators League). By 1989, over a million Americans were playing fantasy football. This was during the early years of the internet so league commissioners, the people that coordinate all the details for the league, oversaw a lot of logistics including combing over Monday and Tuesday newspapers’ sports sections to find stats for scoring and then faxing the week's totals to everyone in the league.

The Briley (Browne + Riley families) League started about a decade ago in the Memorial home of Harriet Riley and her husband, Greg Browne, the league’s faithful Commissioner.

"The interesting thing about our league,” Harriet said, “is that it is worldwide and includes team owners in Australia, England, and America. We have members of both our families (a blended family – step-siblings, in-laws) and friends who are like family. We usually have about 10 teams." 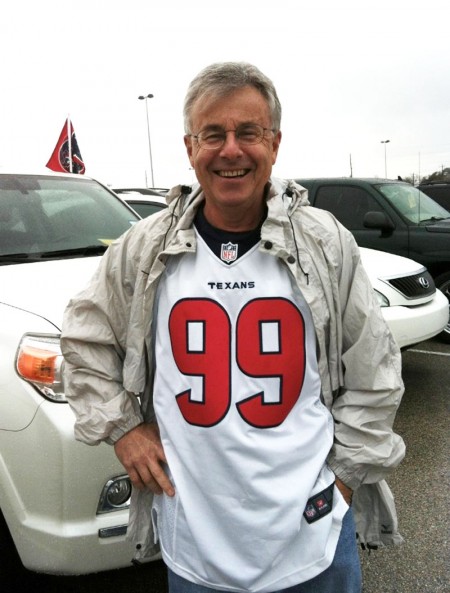 It can be challenging juggling all of the participants' different time zones during the draft. An Australian native, Greg explained how they pull it off. “We have people in all four US time zones, plus two different time zones in Australia. We start the Briley League draft in the United States on Saturday at 6 p.m. Central time, 7 p.m. Eastern, 5 p.m. Mountain, 4 p.m. Pacific, which is 8 a.m. on Sunday in Sydney and 7:30 a.m. in Darwin, Australia. We [U.S. participants] will be drinking beer while they [Australians] are drinking coffee.”

Harriet recalled the draft on Friday, August 25, 2017 – when Hurricane Harvey made landfall. "The three Houston team owners were drafting in person while the others were online around the world. As we started ‘the all-important draft,’ emergency alerts kept going off on our phones. The three of us moved from the dining room table to our pantry closet (the only enclosed windowless space in our house) and continued the draft on our individual computers. The game must go on!”

The Briley League's unique prize is that each season, the champion chooses a NFL player and the other team owners pitch in to buy that player’s jersey for the owner of the winning team. Harriet was happy to report that the year she won, she received a JJ Watt jersey.

Adam Everist, who grew up in West University and now lives in California, created the MT Ballers Fantasy Football League in 2010 to help stay in touch with close friends and his three younger brothers, Drake, Troy, and Mason who live across the United States.

In addition to an impressive league trophy and a six-foot decorative banner, their league scores extra points for some unique and creative features.

Adam shared, “We have made weekly YouTube videos giving updates of who is winning, losing, etc. And in addition to the trophy, the winner gets the coveted one-of-a kind designed and detailed MT Ballers Fantasy Football League Championship ring. My youngest brother, Drake, found a jeweler online to make it for us.

“The years that I have the trophy, instead of mailing it to the new winner, I try to bring it on the plane with me in December when most of the league players head home to Houston for the holidays. It's always an adventure carrying it on the plane and hoping that I can get it to fit under my seat.”

One of the traditions for my husband Andrew’s CC-AFL league is that last year’s winner buys dinner for the other nine team owners on draft night. Andrew has the honor of buying this year’s dinner. Friends John Porche (league commissioner), Kenny Pacheco, Mark Carter, Chip Johnston, and Ron Hower, some fellow CC-AFL team owners, suggested Andrew treat them to a nice steak or shrimp dinner. But having known Andrew for over 30 years, they know the odds of that happening are probably just a fantasy. The odds are pretty good that it will be pizza! And that's okay because it’ll pair perfectly with the cheap beer. Never a dull moment with fantasy football, family, and friends that are like family.

Want to learn more about fantasy football and maybe even set up a 2021 league? The deadline to create teams for the season is before the kickoff of the first NFL game on Thursday, Sept. 9. 7:20 p.m. CST, Tampa Bay Buccaneers and the Dallas Cowboys. 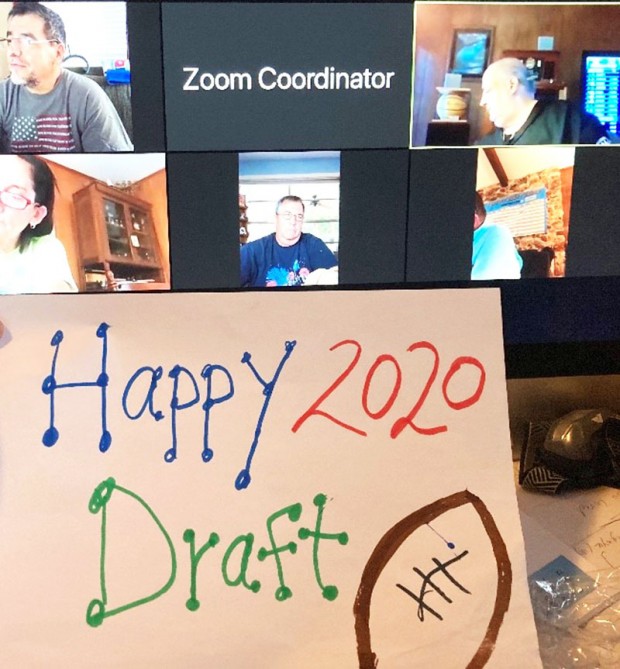 Many 2020 fantasy football drafts were done via Zoom calls. 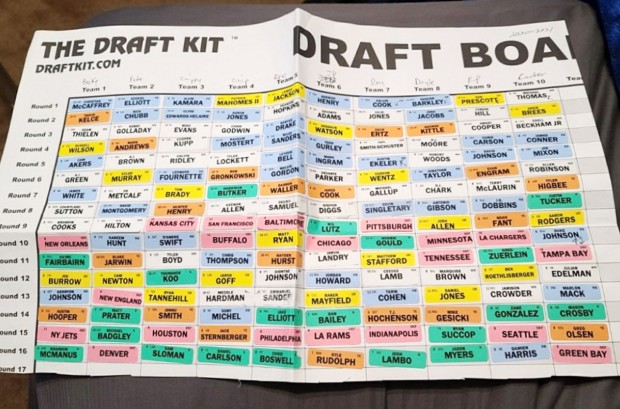 The Big Board was more commonly used before fantasy football drafts took place online, but the Corpus Christi A-Hole Fantasy Football team is old school and still likes to use it to keep track of which players have been picked or are still available. 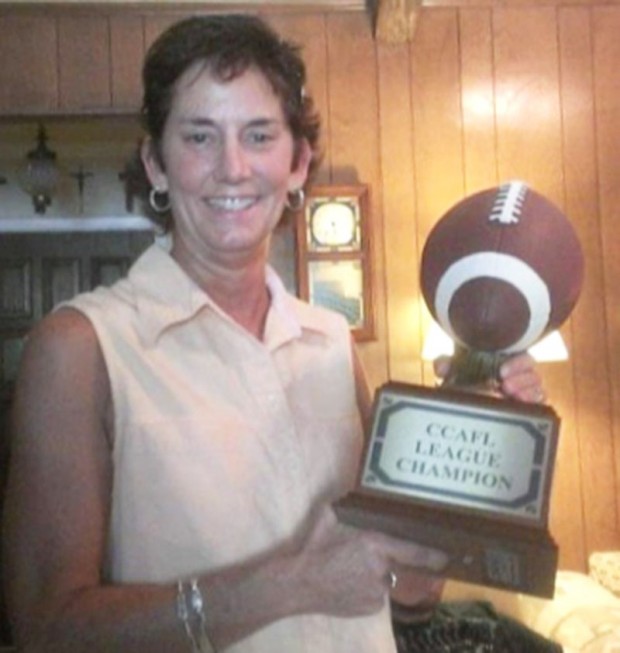 Becky Raesz was the proud 2012 winner of the CCA football league. 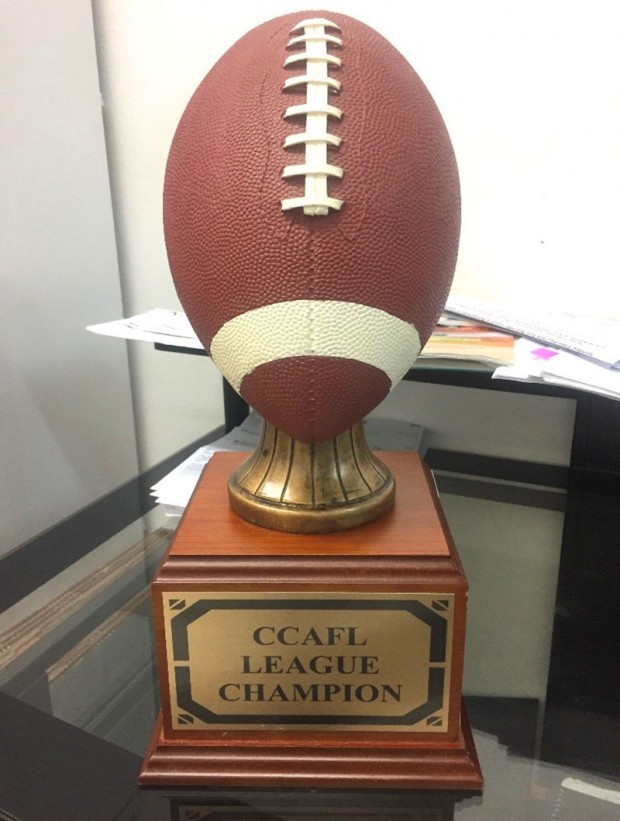 The Corpus Christi A-Hole Football League Trophy plaque displays the names of league Hall of Champions from 1999 to 2019. Andrew Fuller looks forward to seeing his name on the trophy for the first time as the 2020 winner.