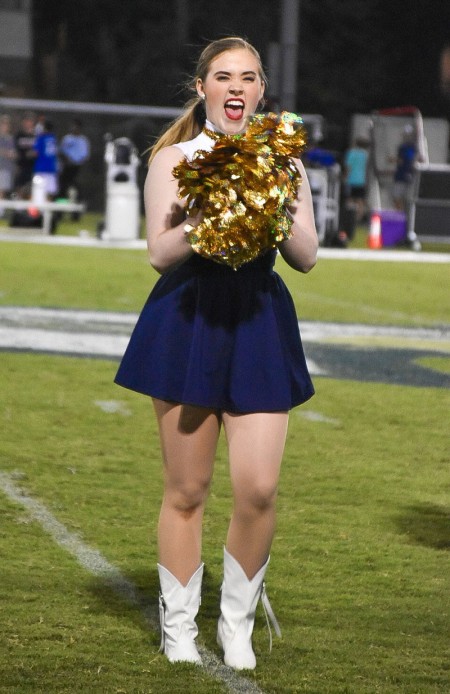 Eager students dressed in neon waited in the gym lobby for the first pep rally of the year. Anticipation swept through the crowd of excited students. They were ready to celebrate the first home football game of the season!

As soon as the doors opened, students flocked into the gym with JV cheerleaders welcoming them. The band ushered students in with their version of “Seven Nation Army” along with the Eagle Fight Song.

Students filled out the stands in vibrant colors and the pep rally began with the varsity football players walking in, encouraging everyone to cheer on the Eagles at the evening game. Next came the varsity cheerleaders' outstanding performance on the mat, complete with backflips, front handsprings and impressive stunting.

Following the cheerleaders, it was time for a game of sibling rivalry. Pairs of siblings were called down and asked questions to see who knew the other sibling best. The game definitely had the crowd laughing and cheering on their classmates. In the end, it was a tie between Kate and Caroline Marshall and Rose and John Dearing. Next, the Golden Girls took center stage to present a new hip-hop dance. The electrifying neon yellow hoodies and colorful dance moves caught the eyes of the audience and kept the energy up.

Finally, it was time for the class yell tradition. Cheerleaders from each grade led their classmates in shouting SBS class yells. Each grade grew louder than the one before. The juniors were so loud that the seniors couldn't even top them at first. A runoff between the juniors and seniors was needed to determine which grade was the most spirited. In the end, the senior Class of 2022 claimed their victory!

Friday night was the first home game of the season. It was perhaps the first sense of normalcy our SBS community has experienced since the start of pandemic. From the Golden Girls’ halftime performance to the student section roaring, Second Baptist School brought an abundance of school spirit to the season’s first Friday night lights against Kinkaid.

“I loved seeing the SBS community return to some normalcy and see everyone gather together to support the football team. The atmosphere was full of enthusiasm for the Eagles, and I am excited to see the team progress and have fun with my friends,” said junior Kennedy Brown.

Wide receiver Karsten Chambers played an exceptional game of offense throughout the night, playing his hardest against the Kinkaid Falcons.

“The stadium was even more packed than last year, and it was great to see the fans back,” Chambers said. “We are ready to continue our football season week after week and bring even more energy and enthusiasm to the field!”