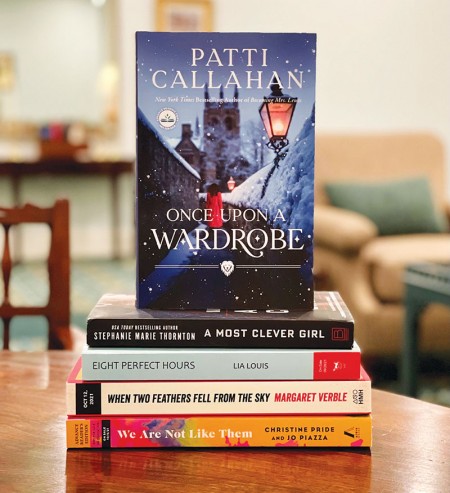 WHAT TO READ This month’s picks include two historical-fiction titles, a novel about racial justice, a C.S. Lewis-inspired story, and a feel-good, romantic novel.

Eight Perfect Hours by Lia Louis – This feel-good book provides an antidote to everything happening in the world right now. After leaving her class reunion frustrated and unhappy, Brit Noelle finds herself trapped in her car in the midst of a blizzard with a nearly dead cell phone. When handsome American Sam Attwood knocks on her car window offering help, the two proceed to spend the next eight hours together until morning arrives and the roads are cleared. Parting with no intention of seeing each other again, Sam and Noelle instead continually bump into each other and begin to wonder if fate has other plans for them. Eight Perfect Hours is a sweet story full of heart that will make readers believe in fate.

A Most Clever Girl by Stephanie Marie Thornton – Based on the true story of Cold War double agent Elizabeth Bentley, A Most Clever Girl chronicles Bentley’s life through her own eyes as told to a young woman who shows up on Bentley’s doorstep demanding answers to a secret she has learned about her own family. From her recruitment by the American Communist Party to creating the largest Russian spy network in the U.S., Bentley details her story and what happens when ideologies shift.

Once Upon a Wardrobe by Patti Callahan – Callahan’s beautiful, magical, and captivating new book, Once Upon a Wardrobe, delves into the question of what inspired C.S. Lewis to create Narnia. Megs Devonshire studies math and science at Oxford and relies on facts versus intuition. When her terminally ill brother, George, becomes infatuated with a new book, The Lion, the Witch and the Wardrobe, and implores her to find out how Narnia came about, Megs finds herself visiting C.S. Lewis, an Oxford don, and his brother Warnie, hoping to answer George’s questions. Instead of providing her answers directly, however, Lewis tells her stories about his own life growing up, which she then relays each weekend to George. While Megs struggles to find the connections, George helps her understand the stories that Lewis relates and how they led to the creation of Narnia.

We Are Not Like Them by Christine Pride and Jo Piazza – This contemporary, timely, and relevant story follows two female friends, one white and one Black, as they navigate the fallout from the shooting of an unarmed Black teenager. We Are Not Like Them is written by two female authors, one Black and one white, and is told in a dual-narrative format, allowing the reader to see how differently the two women view and experience the same tragedy. Best friends since kindergarten, Riley and Jen have stayed close as life has sent them in different directions. Riley has a successful career as a newswoman at a prominent Philadelphia news channel, and Jen married young and is finally pregnant after years of trying painful and invasive IVF treatments. Their close relationship is drastically tested when Jen’s husband, a Philadelphia police officer, shoots an unarmed Black teenager, and Riley is assigned as the chief reporter on the case. As I read the tale unfolding from two perspectives, I found myself angered and saddened but also hopeful that this book will help readers understand how much change is needed.

When Two Feathers Fell from the Sky by Margaret Verble – Two Feathers is a Cherokee horse-diver whose Wild West show loans her to the Glendale Park Zoo in 1926 Nashville. When a tragedy strikes at one of Two Feathers’ shows, she begins to notice strange things happening. Ancient ghosts begin appearing, and one of the zoo animals becomes ill. At the same time, Two Feathers finds herself avoiding an unwanted admirer and befriending Clive, Glendale’s zookeeper. Two must rally zoo employees, her fellow performers, and the zoo owners to solve the mystery of the strange occurrences. This highly original story is a gem to read.