And keep your witches closer 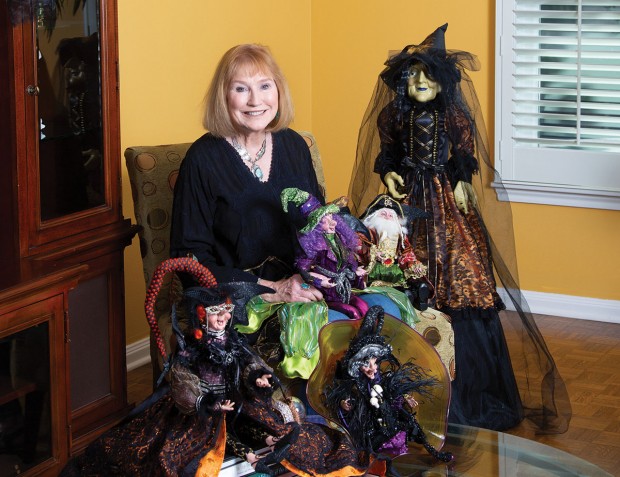 AT ATTENTION Allyson McClurd sits next to her commanding witch, The General, who she says keeps the other witches in line. (Photo: lawellphoto.com)

This is the big lady,” Allyson McClurd said, pointing to the 4-foot-tall witch standing next to the window in her living room, overlooking a room full of smaller witches. “She is the general. She keeps all of the other girls in line.”

And by “the girls,” Allyson means the other witches.

“She watches over the neighborhood here, too, by the window.”

Allyson, 61, has an ever-growing collection of decorative witches that turn her two-story townhome on a quiet, tree-lined road into their lair each October, when every surface becomes haunted with Halloween flair from the front door to the back.

“I named her after my sorority sister Janice, who we used to call The General, because she ram-rodded us all.” (Don’t worry – Janice is in on the joke.)

You may be noticing a trend: Allyson’s “girls” are almost all named after her real girlfriends, whether from her local Beta Sigma Phi chapter or from her Hammersmith neighborhood, where Allyson serves as a board member of the Hammersmith Community Improvement Association.

Beta Sigma Phi is a social sorority for women of all ages – or, as it calls itself, “a friendship network” – that started in the 1930s as a book club during the war. Allyson joined in 1984 when her best friend invited her into the Preceptor Alpha Chi (PAX) chapter, whose members currently range in age from 60 to 80 years old. PAX is one of more than 30 chapters of Beta Sigma Phi in the city of Houston, not even including the Greater Houston area.

“I love it,” Allyson said of her intimate, 13-member chapter. “We’re a great group. We’re very close; four of us went up to New Jersey in April just to visit another sister who had moved away.”

The PAX chapter meets twice a month at members’ homes and is always planning a service or social event. In past years, the women have adopted a family that they help throughout the year, with a Thanksgiving feast, Christmas gifts, or a visit from Santa (with a member’s husband in costume). They have volunteered time at the Houston Food Bank and West Houston Assistance Ministries, and they have prepared packages for the Houston Area Women’s Center.

Allyson, a retired accountant, was born in Illinois but has lived in Texas since she was 10. As an only child, Allyson’s friends have always been like her family – her sisters and brothers. Now they’re even nearer and dearer as they keep her company (in enchanted, witch-decorations form) throughout the month of October. There’s Miriam, Sharon, Carolyn, Jane, Barbara, Debbie, Olivia, and Sue in residence, just to name a few.

“Well, this witch kind of looks like a schoolteacher to me, so I named her after Carolyn,” said Allyson. “And this one’s eye makeup is the same color that Miriam wears, so I named her Miriam. She’s actually one of the first I named.”

From the original gaggle of witches, The Sisters, Allyson’s coven expanded when her husband, Allen, brought home several as gifts. One is named Tabitha (not after a friend) and is pure comedy. Her face is as long as the rest of her body, with a chin protruding out past her nose. Her hair is really just a few strings, and she has two black buck teeth. Allen brought home a decorative black cat to accompany the witches, and from there it took off.

They’ve been collected from a variety of stores like T.J. Maxx, HomeGoods, and Cornelius, and most sit or stand under 2 feet tall. Allyson’s favorites are collectibles by designer Mark Roberts, with their black bat-like wings and elaborately detailed costumes.

“This is the second in command over here,” said Allyson, pointing to one witch sitting on a table near the base of the house’s staircase. “Her name is Edith.”

Edith came with the name (on the tag at purchase), and it stuck. She is Allyson’s favorite in the collection – a Mark Roberts witch with bedazzled cat-eye glasses and a black veil over her face. Her black hat is covered in orange spots and rises up, over, and down again like something drawn by Dr. Seuss, finally tipped with a bat dangling on a string. Her burnt orange and black brocade skirt spreads out across the buffet table, and her tiny glittery heeled shoes just peek out. 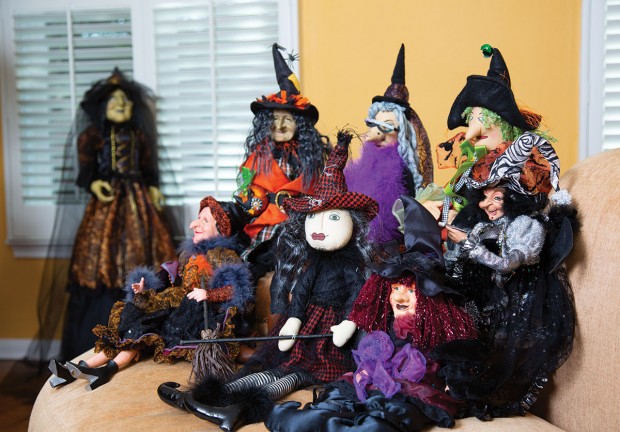 WICKED WITCH The coven of witches, named for her nearest and dearest friends, fly into Allyson’s house each October. (Photo: lawellphoto.com)

Across the room from Edith is the witch collection’s sole male: Jack Sparrow. Jack Sparrow is a pirate, hence the name, but he fits the bill with his batlike wings and black-and-orange striped bows. His billowing, bold red and black costume is overshadowed only by the twinkle in his eye. With his full white beard (hinting at the next holiday season around the corner), Jack Sparrow is one to watch with the ladies … specifically Jezebel.

“This is Jezebel. I kind of have to keep her away from Jack Sparrow,” said Allyson, by way of introduction.

Jezebel is a very buxom witch with a flirtatiously tilted head and a sparkle in her eye to rival Mr. Sparrow’s. Silver tinsel caps her shoulders, and black and silver polka dots adorn the length of her arm. Then there are the fishnet stockings and embroidered black-and-gray cowboy hat, not to mention the black fingernail polish and cigarette in hand. Jezebel is a whole vibe, and she owns it.

Allyson’s imagination runs wild with the characters in her living room, bringing the witches to life. “When I go to bed at night, I tell them, ‘You behave yourselves,’” Allyson said with a laugh. “Then I come down in the morning, and I say ‘You guys had a party last night, didn’t you? I heard y’all.’”

She imagines they must like to escape from their boxes in storage during the remainder of the year: “They don’t like it when I put them away.” (Shh, don’t tell the witches, but then the Santa collection gets to come out.)

Allyson has gathered other small collections over the years – unicorns, dolls, perfume bottles, Santas. “We didn’t have a lot of money,” Allyson said of her childhood. “And I was an only child. So, when I got older, I started kind of going overboard.”

Allyson decorates the front of her home for every season and holiday, but she says her favorite is, without a doubt, Halloween.

“I just love the idea of it. I love the fall, the colors, the weather getting cooler, the kids coming by all dressed up,” Allyson said. “And I like to dress up.”

She and Allen, who is a retired member of the U.S. Air Force as well as a retired IRA accountant, have made Halloween appearances over the years as Sonny and Cher, Caveman and Cavewoman, and Harlequin clowns, with all the costumes handmade by Allyson.

“What scares me the most is ghosts. I remember seeing The Haunting when I was a teenager,” said Allyson. “We went downtown in Victoria, Texas. There was an old courthouse down there, and you come out of the theater in the dark….”  Allyson shivers at the memory. 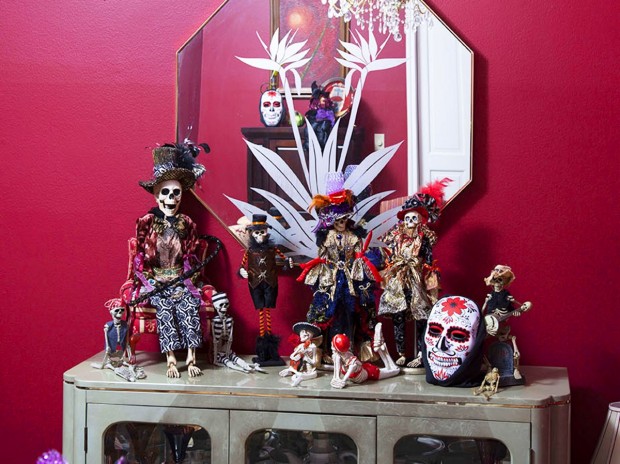 From witches to cats to pumpkins and pirates, Allyson’s Halloween décor covers all the bases. Her assortment of skeletons includes a “voodoo man” from New Orleans and a skeleton wife and husband.

But she is sure to clarify, “I don’t name the skeletons. That’s just weird. It might come true.”

Now if only Allyson could get those witches to settle down in the night. (I’m looking at you, Jezebel.)