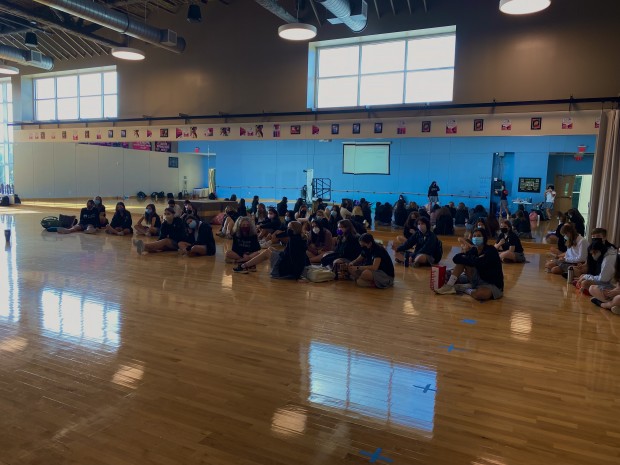 There was quite a turnout to the the Intersectional Feminism Club’s first meeting.

Students everywhere are uncertain yet excited for the 2021-22 school year. Schools are now (mostly) open and have resumed regular activities.

For the young women at St. Agnes Academy, this means the return of clubs and after-school activities. Most club activities were shut down last year, but the return to in-person learning has inspired students to start new clubs. Juniors Zayne Nemry and Phoebe An seized the opportunity and started a new Intersectional Feminism Club, an activism club dedicated to spreading awareness of feminism and what it means.

“Intersectionality is all about the inclusion of not one area, but the converging of multiple areas,” say Zayne and Phoebe. “Our club’s main focus is for students to further understand the intersectionality between race, gender, class, and sexual orientation through the education of women’s issues.”

The two activists will set an unprecedented example of what a high school club can truly accomplish. The club has big plans for this year.

“We are planning to bring in female speakers to share their experiences of sexism in the workplace and offer volunteering opportunities to further impact the Houston community,” said Zayne. The club boasts almost 100 members, who all plan to work hard to spread this important perspective both inside and outside of school.

Many people lament victims of discrimination but feel powerless to stop it. They often think, “what can I do? I’m just one person.” But now, the young women of St. Agnes can join Phoebe and Zayne in their mission to do something about it. When I asked them what inspired them to create this club, they both gave inspiring and insightful answers.

“I am already an online activist and community organizer and saw that there was no organization at St. Agnes that focused on feminism in general. Racial bias, systemic racism, and POC liberation became topics of discussion that many people had misconceptions on. I started this club to clear up these misconceptions and educate my peers and to provide students with glimpse into the lives of other Houstonians,” said Phoebe.

“I decided that I didn’t want to be ignorant in the face of injustices being brought to light, so I made the change to truly educate myself on politics. I wanted my peers to gain an understanding of feminism, how women are unfairly treated by society, and how feminism as a whole should be intersectional. Those newfound understandings of power imbalances and the mistreatment of women around the world is why I decided to help start this club,” said Zayne.

All of St. Agnes now waits to see the great things the Intersectional Feminism Club will accomplish under Zayne and Phoebe’s leadership.