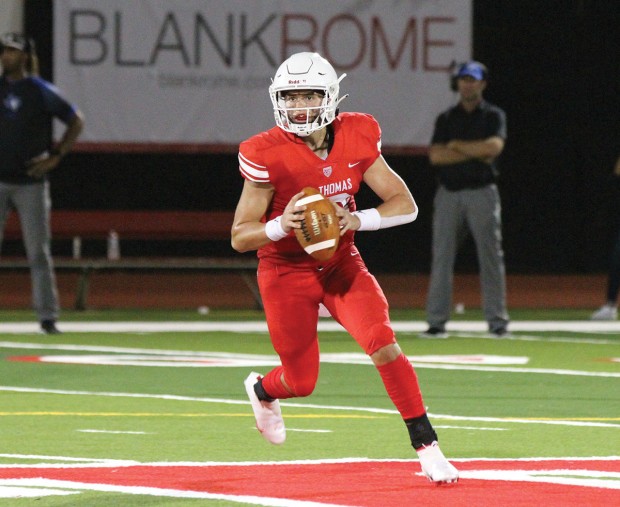 NEW KID IN TOWN Quarterback Jake Wright made an impressive debut in his first start for the St. Thomas Eagles. Wright threw for 343 yards and four touchdowns in a season-opening victory over Needville.

With star quarterback Maddox Kopp now at the University of Houston Cougars, the St. Thomas Eagles had some huge shoes to fill this season. Transfer quarterback Jake Wright stepped in quite nicely in a magnificent season-opening victory over UIL Class 4A Needville. Wright completed 24 of 31 passes for a lofty 343 yards and four touchdowns in a thrilling 35-28 victory for the Eagles.

“We don’t have the sensational type of Kopp-to-Cameron Bonner connection as in years past, but Jake and senior wide receiver Cameron Price did a tremendous job of hooking up all game long,” said Eagles head coach Rich McGuire. “Jake played in Pittsburg, Kansas, last season, and we’re just thrilled to have him on our team. He’s a great kid.”

The true hero of that season-opening victory, according to McGuire, may have been senior Caleb Davis. “On defense, Caleb made one of the most unbelievable-effort plays I’ve ever seen to break up a pass to end a Nederland late-scoring threat, and then on offense Caleb turned right around and rushed in for the game-winning touchdown. Caleb is just so athletic with a refuse-to-lose attitude. In all, it was just a really nice way to start the season.”

The win also marked the first season-opening victory for St. Thomas since defeating The Kinkaid School 27-20 in 2016.

The Bellaire Cardinals opened the football season in memorable fashion with a dramatic 23-20 come-from-behind victory over the Fort Bend Elkins Knights. The Cardinals rallied from 10 points down in the final eight minutes of the game to pull off their first season-opening victory in eight years.

“We graduated a strong senior class, so to open the season with a win behind a young and inexperienced lineup was especially nice,” said Cardinals head coach Herb Kunz. “I’m just proud of everyone, including our coaching staff, for showing the resilience to pull out the win. We just kept plugging away and played hard, and, sure enough, good things happen. It was a great team win in all three phases.”

While the Cardinals are extremely young, they do return a couple of key starters led by defensive end Ejike Brown, who also plays some tight end on the offensive side of the ball. “Ejike looks really strong out there. He’s a senior leader who works extremely hard both on and off the field,” said Kunz.

In addition, three-year letterman running back Jonathon McCoy, whose older brother Willie McCoy was a standout receiver for the Cardinals, is off to an impressive start, exploding for 205 rushing yards in the win over Elkins.

Plus, Kunz had great things to say about senior Chris Totten, who is all over the field as a receiver, cornerback, and return specialist. “Chris is a smart and gritty football player who loves the game.” 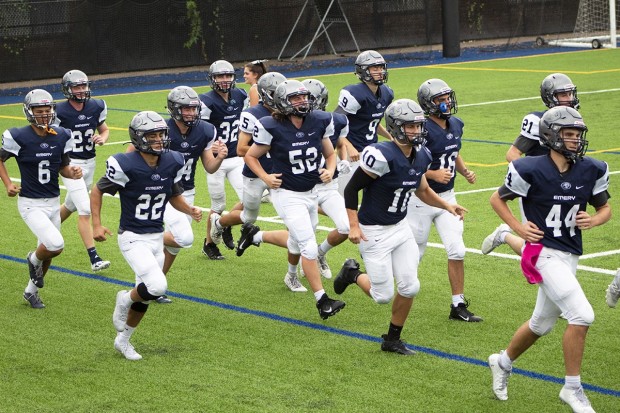 SUPREME IN SIX-MAN The Emery/Weiner Jaguars were off and running to another great start in six-man football. The Jaguars return 15 seniors from a team that advanced to last season’s TAPPS Division 1 state semifinals.

“We have 15 seniors back from last year’s state semifinalists, with about 10 of them having played on our state-championship team in 2019, so it’s an outstanding group of guys,” said Jaguars head coach Jason Reimers. Leading the way is senior Vincent Banks, an all-state kicker, linebacker, and tight end. Banks was named the pre-season six-man football defensive player of the year and was one of only three six-man football players statewide to earn a spot on the pre-season, 100-player, private-school watch list by Dave Campbell’s Texas Football.

Meanwhile, the Jaguars also bring back standout running back and wide receiver Leo Gerst, as well as quarterback Doran Yustein. Over the previous two seasons, Yustein threw for 44 touchdowns, while Gerst opened this season by accounting for 170 yards and three touchdowns in the win over Bastrop.

Defensively, safety Drew Cohen returns after earning all-state honors last season. “Drew is the captain of our secondary,” said Reimers. “He’ll also play some wide receiver for us. We have a terrific team, and our goal as always is to win a TAPPS Division 1 state championship.”