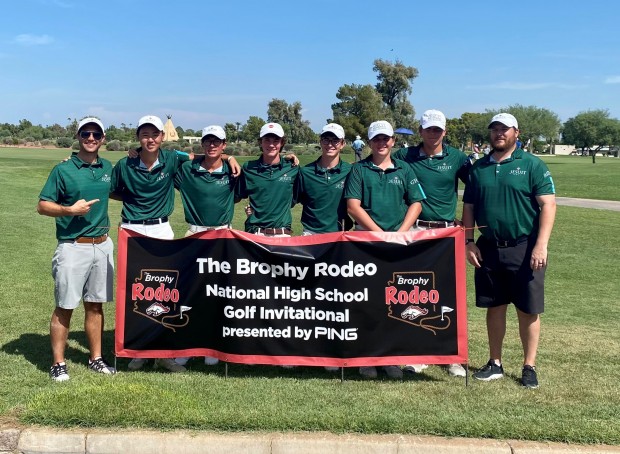 Strake Jesuit players and coaches at the tournament

The Strake Jesuit varsity golf team competed in the Brophy Rodeo National High School Golf Invitational in Phoenix, Arizona and placed seventh out of 20 teams in the tournament, which included top teams from across the country.

Strake Jesuit’s total team score from the two days was 597 over 36 holes, which is a school record for a two-day tournament. Senior Baird Bright led the team with a 147 in two rounds, which is three over par.

“Not only was his total score the fourth best two-day score in SJ golf history, but he showed a lot of grit and didn’t let the spotlight get to him,” said head golf coach Jeremy Dunford.

“It was a great experience playing in my first varsity tournament, and I am overall pretty pleased with my performance,” said Suell. “Things started off rough on the first day, but it was nice to bounce back with a solid round the second day.”

Coach Dunford was impressed by the team’s ability to persevere through the difficult holes and stay mentally tough throughout the tournament. Each player was able to stay locked in and perform. 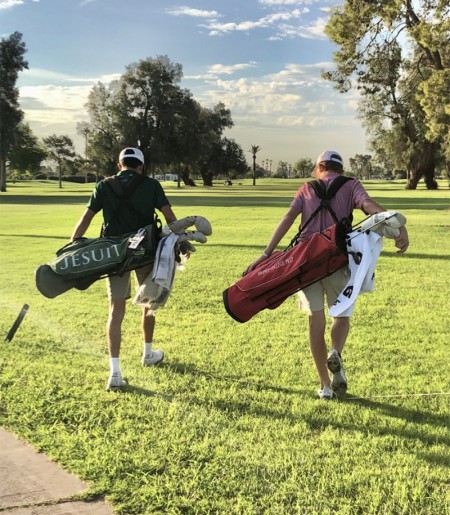 Players from Strake and Brophy walking the course

Beyond being a golf tournament, this event was an opportunity for Strake Jesuit and other Jesuit schools participating to connect off the golf course. These schools were Brophy College Preparatory and Regis Jesuit High School. These schools went to mass and dinner after the tournament, which was a highlight for the students and coaches.