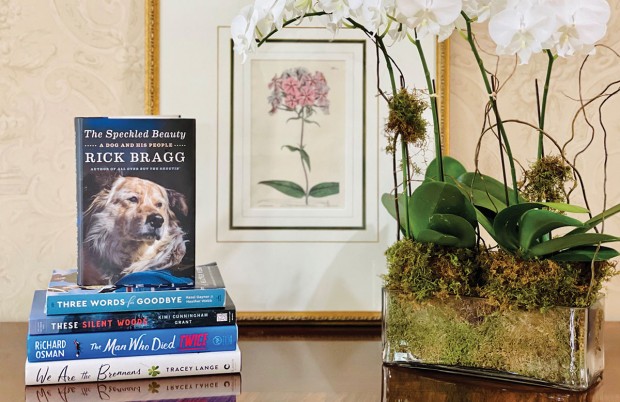 WHAT TO READ This month's books include two spine-tingling mysteries, a story about an unruly dog, a historical-fiction title about a trip across 1937 Europe, and a compelling family drama.

For November, I am spotlighting several worthy titles that I missed earlier in 2021.

The Man Who Died Twice by Richard Osman – Richard Osman returns with the follow-up to his sleeper hit from last year, The Thursday Murder Club. This engaging, big-hearted, and humorous series features four individuals (Elizabeth, Joyce, Ibrahim, and Ron) living at Cooper’s Chase, a retirement community in the English countryside. Elizabeth is contacted by an agent with whom she worked when she was in MI5. He has been accused of stealing $20 million worth of diamonds and needs a safe place to hide out, so Elizabeth agrees to shelter him at Cooper’s Chase. Filled with entertaining and well-drawn characters and a clever mystery, The Man Who Died Twice is a joy from start to finish, and I am already anticipating Book 3. While this book is the second in a series, it can be read as a standalone as well.

The Speckled Beauty: A Dog and His People by Rick Bragg – In The Speckled Beauty: A Dog and His People, Bragg chronicles how his life was forever changed by the arrival of a half-blind and poorly behaved stray dog he eventually names Speck. At age 60, he finds himself recovering from non-Hodgkin’s lymphoma and heart and kidney failure and having to live in his mother’s basement. When Speck arrives, Bragg doesn’t know what to make of him but eventually realizes he has been granted the gift of an unruly and hilariously poor behaved dog that loves him unconditionally. From a chapter about the perfect dog he wanted (“The Dog I Had in Mind”) to one about how the dog kept tripping him up (“Tumbling, Tumbling Down”), Bragg brings to life his adventures with Speck and how the rescuer ultimately becomes the rescued. We can all learn from Speck about how to live a life of unbridled joy and to love with abandon even when life has knocked us down. And thankfully, unlike many dog books, Speck is still alive and terrorizing people (and other animals) in Alabama.

These Silent Woods by Kimi Cunningham Grant – Kimi Cunningham Grant’s new compelling and haunting thriller stars a father and daughter duo who have been living in a remote cabin off the grid for eight years in the northern Appalachian woods. Lacking electricity and running water, Cooper and Finch’s only connections to the outside world are Cooper’s friend Jake, who owns their cabin and brings them supplies once a year, and a mysterious older AK-47-toting neighbor named Scotland. But when Jake does not show up with supplies and Finch begins to push back on their isolated lifestyle, a series of events are set in motion that will challenge the life Cooper has created for them. This tension-filled story kept me on the edge of my seat until I had turned the last page; I read it in one sitting, and it is one of the best thrillers that I have read in a long while.

Three Words for Goodbye by Hazel Gaynor and Heather Webb – Estranged sisters Clara and Madeleine Sommers agree to set out on a trip together at the request of their dying grandmother Violet and deliver three goodbye letters to friends from Violet’s past. Unable to put their personal conflicts aside, the women, constantly clashing with each other, make their way across 1937 Europe to Paris, Venice, and Vienna amid rising political tensions, learning startling family secrets as they go. When they finish their deliveries, the women leave the turmoil in Europe and head home aboard the Hindenburg, making for a tense and dramatic ending to this fantastic book. The book’s strong sense of place and authentic characters made this a standout read for me.

We Are the Brennans by Tracey Lange – This terrific contemporary drama follows the Brennans, an Irish Catholic family whose bonds and livelihood are tested when estranged daughter Sunday Brennan is involved in a drunk driving incident and returns home to New York to recover. Five years prior, Sunday had fled to California with no explanation to her family and long-time boyfriend Kale. While she is happily and immediately welcomed back into the family fold, her arrival slowly triggers a release of long-held secrets, which spark a chain of events that require the Brennans to put aside their differences to keep their family intact. We Are the Brennans is a beautifully rendered story that highlights the importance of family and that reminds us there are consequences no matter the choices made.