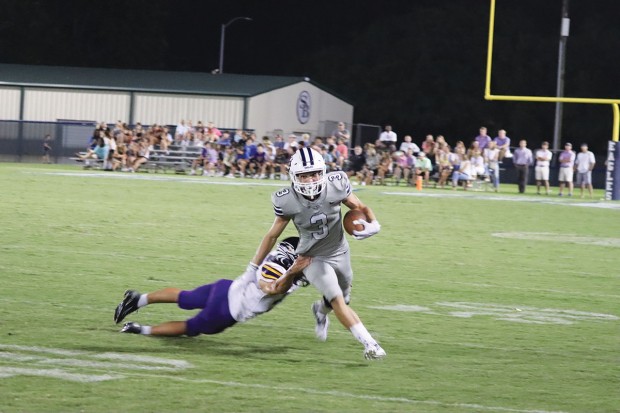 EAGLES ON THE LOOSE It’s been another big season for Second Baptist Eagles wide receiver and four-year starter Grayson Kim. The Eagles were looking to make another deep playoff run this season after advancing to the TAPPS state semifinals the past three seasons.

With a thrilling 23-19 victory over Calhoun, the Second Baptist Eagles secured an impressive win over a larger UIL Class 4A program, while also raising its record to 4-1 midway through the season.

“I would say it was a game that we circled on our schedule as a measuring stick to see how our program has progressed, and our kids responded well to the game,” said Eagles head football coach Terry Pirtle.

The Eagles have responded quite well in recent seasons, with three straight trips to the TAPPS Division 2 state semifinals, while again looking on track for another deep playoff run this season. “On offense, we’re led by running back Eli Smith,” said Pirtle. “Eli is running the ball hard while breaking tackles and extending plays. He’ll play next season at Villanova University.” Also on offense, Pirtle says, sophomore quarterback Turner Murdock has shown big improvement each week, while wide receiver and four-year starter Grayson Kim has been a major contributor. 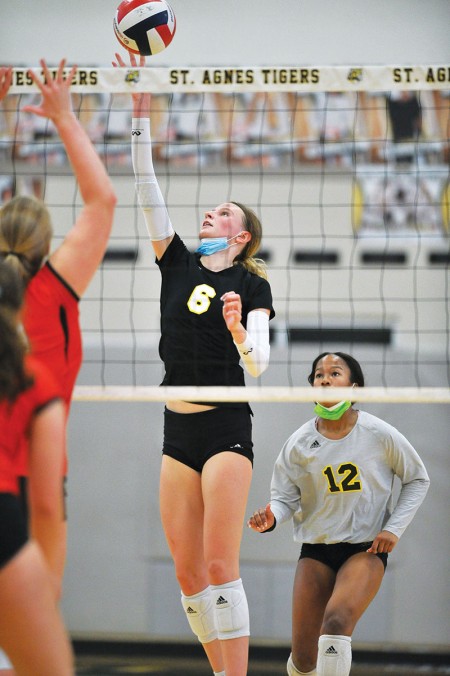 In volleyball, it’s been another powerhouse season for the St. Agnes Academy Tigers, who carried a 26-7 record deep into the regular season. Along the way, the Tigers defeated several of the area’s premier Class 6A UIL programs, including state-ranked Ridge Point and Klein.

Now in her third season as the Tigers head coach, McMillian guided St. Agnes to the TAPPS 6A state championship in 2019 and then the state finals last season, with this year’s team right on track to making another deep playoff run. “We have some seniors who were part of that state-title team two years ago, along with a strong junior class that played on last season’s state final team. We’ve also sprinkled in some younger players, and it’s all come together really well this season,” said McMillian.

Among the returnees for the Tigers is senior sensation Sophia Agee, a two-time all-state player for the Tigers, as well as second-team all-state player Piper Stephenson. In addition, senior outside hitter Alexis Visintine and seniors Grace Webber and Nicole Dworaczyk are three-year starters for the Tigers. Also, junior Ariel Francis, who is a three-year varsity player, and junior NiMya Maruska are key contributors. “The big thing for us is continuing to polish our system and execute at an extremely high level,” said McMillian. 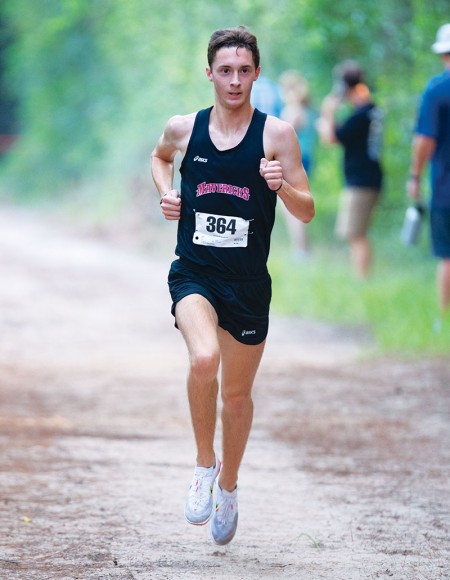 LEADER OF THE PACK It’s been a dominant high school career for St. John’s cross country and track and field sensation Emmanuel Sgouras. In addition to his many victories for the Mavericks, Sgouras also finished first at the Balkan 18U Championships in the 3,000-meter race. (Photo: Kevin Long/Gulf Coast Shots)

With his father being from the Island of Crete, Sgouros has spent many of his summers in Greece, where he’s run internationally for the Greece Junior National Team. This summer, Sgouros raced to victory at the Balkan U18 Championships in the 3,000 meters. He then returned home to Houston in time to lead the St. John’s foursome of Sgouros, Danny Wasserman, William Thames, and Wilson Bailey to victory in the Greenhill 6-Mile relay race.

In September, Sgouros dominated a field of many of the state’s top runners to win the McNeil Invitational while covering the 3.1-mile course in a scorching fast time of 15:01.

“That was a phenomenal victory for Emmanuel,” said Mercado. “It was the same course where the UIL runs its state cross country meet, with four of the eight top runners in the state making up the field.” Sgouros will be the clear favorite to finish first at this month’s SPC cross country championship, but he very well could lead the Mavericks to a team championship.

“We’ve got a really good group,” said Mercado. “Wilson Bailey ran a personal best at the McNeil Invitational, and we had a big team victory at the Woodlands Christian meet. If we can stay healthy and run as a team, we’ll have a shot at challenging St. Mark’s for the team championship.”

9:30 am to 3:00 pm
Location:
Cultural Center Our Texas
END_OF_DOCUMENT_TOKEN_TO_BE_REPLACED