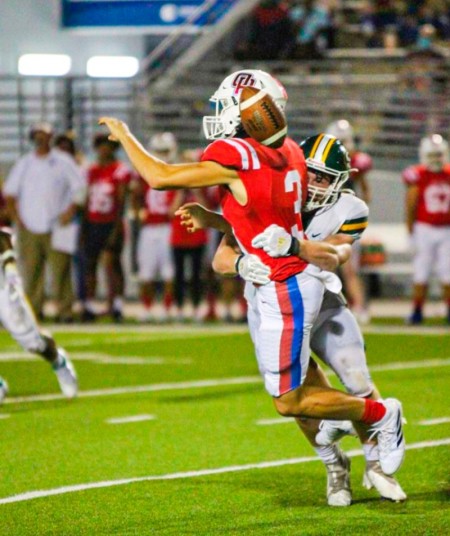 Football is a fan favorite at Stratford, and this year’s Spartan team does not disappoint. The undefeated Spartans secured a 24-17 victory against Memorial last Friday night and a 64-0 win over Cypress Creek on Saturday to increase their winning streak to eight for the season.

According to senior offensive player, Diego Denson, beating Memorial was a definite highlight of the season.

“I’ve been on the varsity football team since my sophomore year, and we have never beaten Memorial," said Diego. "Seeing the huge crowd and all the support we had at the game, it was definitely the best memory I’ve had this year.”

When asked about when he knew the team was going to be successful, he responded that it was after the non-district game against Oak Ridge early in the season—even though the team did not play their best game, they were able to come together and secure a win.

Diego added, “the Oak Ridge game showed us how we could overcome any adversity no matter what challenge we were up against.” With two games left in the regular season, the team continues to fight back when challenged and keeps improving each week.

Head Coach Todd Rankin said that he first knew this team was something special when they were able go undefeated in the pre-season non-district games.

This year’s senior class is Coach Rankin’s first team to be with him since their freshman year. He said, “these guys really bought into the Earn The Right To Win philosophy when I came in 4 years ago, and it’s awesome to see that paying off.”

As for the underclassmen, Andrew Thomas, a junior offensive player, reflected on how his class has known for a few years that they were going to succeed on varsity since both their freshman and junior varsity teams went undefeated.

Thomas points to Hawkins Polley as a junior teammate that makes a substantial impact on the Stratford football team.

“In the Memorial game, Hawkins managed to get 2 huge first downs that allowed our team to gain momentum," said Andrew.

In addition to Hawkins, Coach Rankin says that the Spartans have a really good mix of leaders from the senior and junior classes.  He says that Diego Denson-offense and Colin Tenney-defense are two seniors that everyone looks to for leadership, while Cooper King-defense is another junior that has really stepped up to lead this year.

"All four of these guys plus several others, are the kind of players that make those around them better," said Coach Rankin.