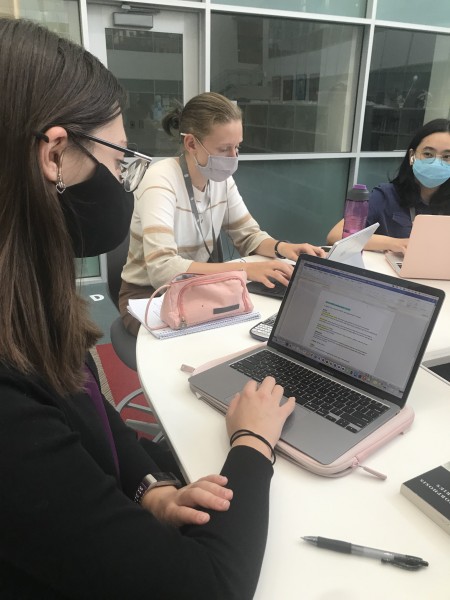 In UNICEF Club, Club President Sana M. is organizing a ‘Blind Date with a Book’ initiative over the next coming weeks while Deputy President Viola H. spearheads efforts to do a Sustainable Development Goal themed scavenger hunt for middle school. All members are involved with planning World Children’s Day as the end of October approaches whilst they are amidst preparations for their most active time of year in terms of events.

‘’I have really enjoyed being able to take on a leadership role this year and become more involved with the running of the club," said Sana. "Being able to represent UNICEF at BIS Houston is really rewarding and it is fantastic to see so many members of our school become involved with UNICEF initiatives”.

Mock Trial has been working for weeks to prepare a team of newcomers for this year’s trial. They are very excited that the case is finally out and ready to get to work finalizing the team and starting to build their cases.

Lead Defense Attorney Harish P. commented on the difference between his role this year compared to last year: “This year, I have taken on increased responsibility in Mock Trial by becoming Lead Attorney and transitioning from just a member of the team to more of a leader role within the club as a whole. Over the past few weeks, I have organized our club meetings and begun to take charge in teaching the new members of the group the basics of mock trial.”

The first session of MUN came to a close as the country representatives came together to write two different resolutions, with Great Britain’s prevailing in a majority vote. Year 13 students Jasper L. and Henry P. organized the activity among Year 12 and 13. Henry P. thought that it was a wonderful opportunity to help successfully run MUN this year, especially after a year upon which new challenges can be debated. It was also great to introduce people to MUN this year.

Global Justice League is doing so well that it has been submitted for an award from ISC Research for Ethical Values. They are being recognized as a club that aids students in developing ethical values which inspire the members to act as global citizens. Global Justice League is certainly well suited for this commendation with its number of divisions that prioritize global and ethical issues and the BIS Houston community is grateful to have such a wonderful club organizing activities to educate us and allow us to help with major world events.