The Best Nonfiction Books of 2021 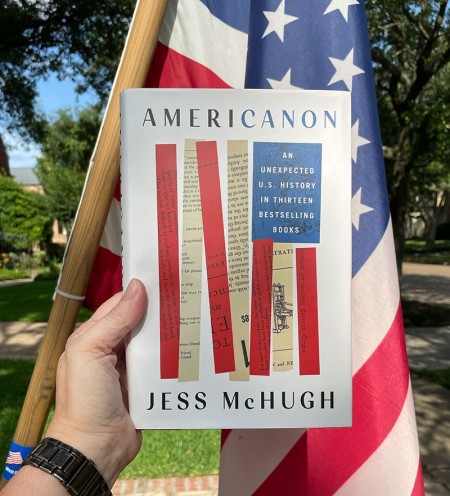 Last week, I wrote about the best historical fiction novels of 2021. This week, I am focusing on my favorite nonfiction books of the year. So many interesting and entertaining nonfiction titles were published in 2021, and I had a very hard time narrowing down my favorites. As I did in 2020, I found that nonfiction kept me engaged and focused on something other than the news.

In the nonfiction genre, my favorites include books about an iconic New York City building, the 2020 Nobel Prize winner for Chemistry, several memoirs, Pan Am, a fabulous Covid essay anthology, and more. Here are the 12 best nonfiction books of 2021 (listed alphabetically):

1. Americanon: An Unexpected U.S. History in Thirteen Bestselling Books by Jess McHugh – McHugh traces the history of 13 nonfiction books that shaped the United States from the late 1700s to the late 1900s including Webster’s Speller and Dictionary, The Old Farmer’s Almanac, Betty Crocker’s Picture Cook Book, Emily Post’s Etiquette in Society, in Business, in Politics, and at Home, and more. For each book, Americanon first details the book’s creation and purpose including information about the author(s) and then moves on to the impact the book had and why. Americanon is a thought-provoking and fascinating deep dive into how these books helped shape a nation.

2. The Barbizon: The Hotel That Set Women Free by Paulina Bren – After World War I, women flocked to New York City to follow their dreams and sought safe, female-only places to live. While residential hotels for men existed, no such thing was available for women at the time. The Barbizon Hotel for Women was built to fill this void, housing such well-knowns as Grace Kelly, Liza Minnelli, Ali McGraw, Sylvia Plath, Joan Didion, Phylicia Rashad and many more, and was so successful that it remains the most famous of the women-only residences erected in the first half of the 20th century. In The Barbizon, Paulina Bren captures not only the story of the legendary hotel but also important moments in women’s history from that time period.

3. The Code Breaker: Jennifer Doudna, Gene Editing, and the Future of the Human Race by Walter Isaacson – 2020 Nobel Prize winner Jennifer Doudna’s contributions to the world will not be fully known for years and possibly decades, but her development with collaborator Emmanuelle Charpentier of CRISPR, an easy-to-use gene-editing technology, is revolutionizing modern science and medicine. Following this life-changing creation dubbed “the most important biological advance since … the discovery of the structure of DNA”, Doudna, a biochemist and genescientist, has worked to tackle the moral issues associated with the invention, balancing the ability to better fight off new viruses such as the coronavirus and help prevent depression with allowing parents to choose a child’s gender, intelligence, or eye color. In this exhaustively researched book, Isaacson chronicles the advent of an amazing new technology and what it will mean for science and the world at large. 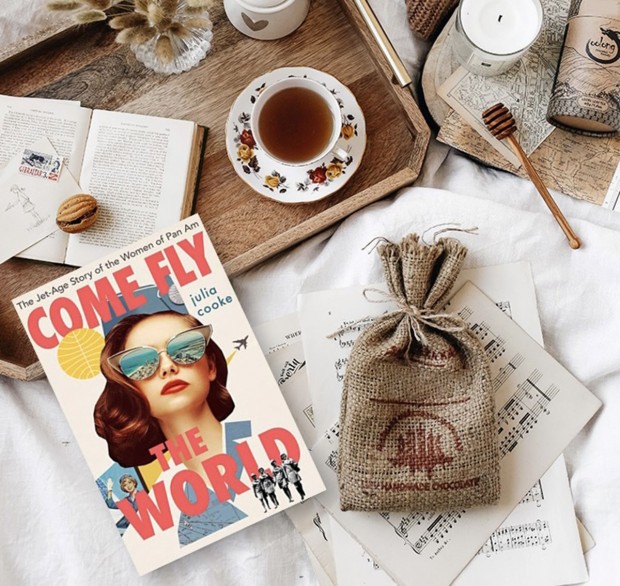 Come Fly the World tells the courageous stories of the women who worked as flight attendants for Pan Am in the 1970s.

4. Come Fly the World: The Jet-Age Story of the Women of Pan Am by Julia Cooke – Julia Cooke chronicles the women who worked as stewardesses (she uses this term since that was in use then) for Pan Am Airlines and their contributions to the Vietnam War effort and women’s rights. Cooke interviewed scores of women who served as stewardesses for Pan Am and chose to tell several of their stories in-depth. She relays their stories while also weaving in historical details such as the way in which the role of flight attendant changed over the years and the women’s help in staffing American soldiers’ R & R trips between Saigon and Hong Kong. It is a truly awe-inspiring and captivating read. 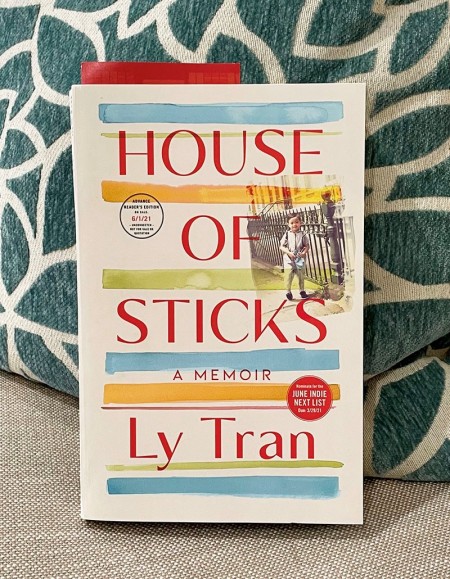 Ly Tran tells the story of her family's move from Vietnam to Queens in the 1990s.

5. House of Sticks: A Memoir by Ly Tran – Ly tells the story of how her family moved to the United States as part of a relocation program from Vietnam when she was three. They are resettled in an apartment in Queens, and they speak no English and are required to find their own work. Plus they are required to pay back the cost of their flights to the U.S.. Ly’s father spent 10 years in a Vietnamese prisoner of war camp and has severe PTSD. So on top of trying to navigate the immigrant experience, her family is also trying to cope with his anger and irrational choices. For several years they perform sweatshop work as the kids go to school during the day and work a lot of the night. Ly tells her family’s story with grace, and she provides great insight into what the immigrant experience is like for one family.

6. Lady Bird Johnson: Hiding in Plain Sight by Julia Sweig - Lady Bird Johnson: Hiding in Plain Sight seeks to correct the misconception that Claudia Alta “Lady Bird” Johnson’s role as First Lady was uneventful by documenting her many contributions while in office. From the incredible strategy memo she created for Lyndon Johnson when he was debating whether to run for president in his own right to managing the White House during one of the country’s most tumultuous decades, Lady Bird served as one of her husband’s most respected and valued political consultants. She was also the first First Lady to treat the East Wing as a professional office, creating her own initiatives including pursuing comprehensive environmental protections and encouraging women to pursue their own careers. In Lady Bird Johnson: Hiding in Plain Sight, Julia Sweig provides a new understanding of Lady Bird’s legacy including her important progress on environmental, racial, and women’s issues.

7. Moms Don’t Have Time to: A Quarantine Anthology edited by Zibby Owens – Covid-19 altered our lives in 2020 in ways that few could have foreseen – we have a new vocabulary specific to our current existence, our interactions with each other are modified, and our day-to-day routines are significantly different than prior to the pandemic. Zibby Owens has used this time very productively, promoting authors and their books on her podcast Moms Don’t Have Time to Read Books and on IG-TV, through an online magazine she created entitled We Found Time which addressed the ever-growing demands on our time (something the pandemic just further exacerbated), and in countless other ways. This anthology compiles the essays from We Found Time which are written by a wide variety of authors and organized thematically into five categories of things moms have to find time for: eat, read, work out, breathe and sex. Some of my favorites are “Wait, Did I Kill My Book Club?” by Rachel Levy Lesser, “What the Brady Bunch Taught Me about Family Dinners” by Alison Cayne, and “When I Got Coronavirus, My Husband Became My Wife” by Karma Brown. All proceeds from the sales of this book will go to the Susan Felice Owens Program for Covid-19 Vaccine Research at Mount Sinai Health System (Zibby lost her mother-in-law, Susan Felice Owens, and grandmother-in-law to Covid-19 this past summer).

8. My Remarkable Journey: A Memoir by Katherine Johnson –  This memoir of Katherine Johnson’s remarkable life is being published posthumously and is a quick and fascinating read. Her story is now known the world over after the Hidden Figures book and movie celebrated her contributions (along with several other Black women) to NASA’s first manned flights in space, but in My Remarkable Journey she starts at the beginning and tells the incredible tale of her 101 years in her own words. From her early years as a child prodigy in West Virginia to her many years at NASA as a human computer, she threads in her experience as a Black woman and includes the historical backdrop against which her contributions occurred.

9. A Season with Mom: Love, Loss, and the Ultimate Baseball Adventure by Katie Russell Newland – Newland, who resides in Austin, and her mom loved cheering the Cubs on from their New Orleans home and dreamed of visiting all of the Major League Baseball ballparks one day. When Katie’s mom passes away before they can fulfill this dream, Newland sets out to visit all 30 ballparks in one season to both honor her mother and to reflect on their relationship along the way. Each chapter pairs a visit to a particular ballpark with a relevant story about Katie’s mother and includes beautiful black-and-white photos, with one item highlighted in red, from each stop. Peyton Manning, her childhood neighbor, writes the introduction, and Kaley Cuoco has optioned it for the screen. I highly recommend this one, which would make a great gift for the holidays.

10. The Speckled Beauty: A Dog and His People by Rick Bragg – In The Speckled Beauty: A Dog and His People, Bragg chronicles how his life was forever changed by the arrival of a half-blind and poorly behaved stray dog he eventually names Speck. At age 60, he finds himself recovering from non-Hodgkin’s lymphoma and heart and kidney failure and having to live in his mother’s basement. When Speck arrives, Bragg doesn’t know what to make of him but eventually realizes he has been granted the gift of an unruly and hilariously poor behaved dog that loves him unconditionally. From a chapter about the perfect dog he wanted (“The Dog I Had in Mind”) to one about how the dog kept tripping him up (“Tumbling, Tumbling Down”), Bragg brings to life his adventures with Speck and how the rescuer ultimately becomes the rescued. We can all learn from Speck about how to live a life of unbridled joy and to love with abandon even when life has knocked us down. And thankfully, unlike many dog books, Speck is still alive and terrorizing people (and other animals) in Alabama.

11. The Three Mothers: How the Mothers of Martin Luther King, Jr., Malcolm X, and James Baldwin Shaped a Nation by Anna Malaika Tubbs - While much is known about Martin Luther King, Jr., Malcom X, and James Baldwin, most people are unfamiliar with the exceptional women who raised these three great men: Alberta King, Louise Little and Berdis Baldwin. In her seminal debut, Anna Tubbs brings these women’s stories to life and emphasizes their efforts to inspire and protect their children who were born into a society that resented them from day one. This beautiful homage to Black motherhood is highly relevant for today’s world.

12. Woodrow on the Bench: Life Lessons from a Wise Old Dog by Jenna Blum – Blum’s Labrador retriever Woodrow was her constant companion; through thick and thin he was always there. Since she lived across from the Commons in Boston, they would venture over daily to what became his bench and greet friends and strangers alike. Once he reached 14, she began to worry about what would happen when he was gone. Woodrow on the Bench pays homage to her sweet companion and the lessons he taught her and others. I loved this book and finished it with tears streaming down my face.

I would love to hear your favorite nonfiction books of the year. Feel free to drop them in the comments below.