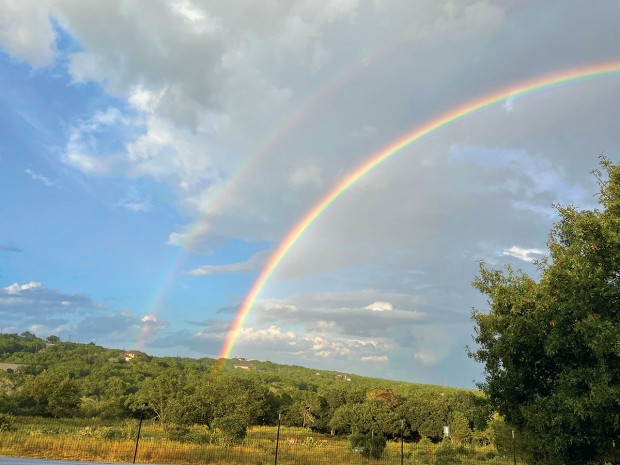 Have you noticed your reaction when a rainbow suddenly appears? At first, it feels personal, like it’s just for you. But then you become aware you’re not the only one seeing it.

I had that same sensation while sifting through some boxes in the garage that should have been dealt with decades ago. It felt a bit like rummaging through a time capsule. Remember canceled checks? Mixed in with 1990s checks was a Peanuts cartoon. Short of carbon dating, I’m guessing it was published about 1994. But it could have been written last week.

It’s not as narcissistic as it sounds. Charles Schulz, the cartoon's creator, would have given that line to Lucy if it were intended to be self-gratulatory. Linus is a complex character, thoughtful, wise, and intelligent for his 5 years. He serves as the house philosopher and theologian. It takes guts to live and act from your own sense of personal integrity – thus, the blanket.

Charles Schulz’s own admitted insecurities lent authenticity to his characters. That’s why his strips still run today as Classic Peanuts, though nothing new has been written since he died in 2000. It makes me want to grab a grandchild and sit down with A Charlie Brown Christmas this year for its 56th annual run. It’s hard to believe this Emmy- and Peabody-winning work of art first aired in 1965. It’s even harder to believe it almost didn’t.

The story of how this all came to be is best told in a 50th-anniversary piece in The Washington Post called “The Gospel Truth Behind Why Tonight’s A Charlie Brown Christmas Endures.” It includes an epiphany moment by Lee Mendelson, a producer and director, while riding in a cab over the Golden Gate Bridge. A bit of now-iconic Peanuts music called “Cast Your Fate to the Wind” by conveniently located San Francisco jazz musician Vince Guaraldi came over the cab radio. Later, Guaraldi played what would become the Linus and Lucy Theme over the phone to Mendelson before he forgot it, as if he’d caught it in the air.

Mendelson had a documentary about Charles Schulz in mind with Guaraldi’s music, and fate intervened. On April 9, 1965, Charlie Brown and the Peanuts gang appeared on the cover of Time Magazine. This produced a phone call from Coca-Cola, who wanted to sponsor a Christmas special with Peanuts characters.

Schulz wrote the entire script in a matter of weeks. On a low budget in a short timeframe, the first animated Peanuts special was completed in six months. After watching it together for the first time, its own creators admitted to a Charlie Brown moment of self-doubt. “We thought we’d ruined Charlie Brown,” said Mendelson. Peanuts had been running in newspapers since 1950. They worried that they had given voices and motion to a daily strip that had already been embedded in readers’ minds in their own individual ways.

After viewing it, the network thought it was slow and boring. It was a cartoon without a laugh track (Schulz walked out of the room when it was suggested), a strange mix of Christmas with jazz music, actual children – most untrained in acting – as the voices of the characters (for budget reasons), and a recitation from the Bible. The network reluctantly put it on the air, for one time only, because it was already published in TV Guide.

But the audience had the last word. On Dec. 9, 1965, over 15 million households tuned in for A Charlie Brown Christmas. A pleasantly shocked network agreed to run it again between Christmas and the New Year, then immediately commissioned a series of Peanuts specials by the same crew. This year, it airs on PBS Dec. 19 at 6:30 p.m. Central.

The story of how A Charlie Brown Christmas came to be is a Christmas story of its own. It snuck up on the world through a few individuals acting from their own instincts, breaking rules and norms. Their inner Linuses were at work. It took guts, some blanket grabbing, and a rainbow moment or two. And like that cartoon in the garage, it could have been written yesterday.